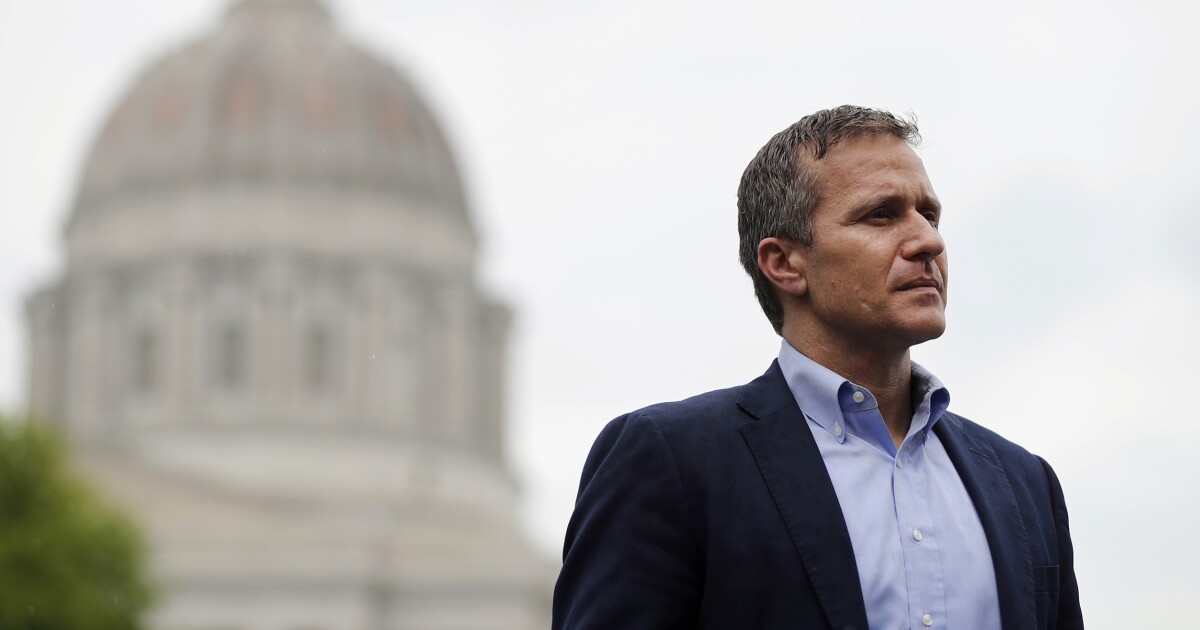 Ken Harbaugh, a Navy veteran and longtime friend of Missouri GOP Senate hopeful Eric Greitens, is calling for the scandal-plagued candidate to drop out of the tight primary race.

Greitens was governor of Missouri for 17 months in 2017-18 before stepping down under threat of impeachment following a sex scandal in which he allegedly took a compromising photo of his hairstylist without her knowledge during the course of an affair. Greitens, now a leading candidate in the Aug. 2 Missouri GOP Senate primary, back then allegedly threatened to use the photos as blackmail.

Greitens, once seen as a prospective presidential candidate after a meteoric rise through Duke University, as a Rhodes scholar, and member of the Navy SEALs, has since been embroiled in a number of controversies. Since he launched his bid for the state’s open Senate seat, Greitens has come under fire for a campaign ad encouraging people to hunt “RINOs,” or “Republicans in name only,” and faced backlash for allegations of domestic abuse.

Harbaugh, with Greitens, co-founded the Mission Continues, a nonprofit group that helps veterans reintegrate. In a video posted to Twitter on Wednesday, Harbaugh highlighted their long-standing relationship and former policy positions that don’t align with the far Right. Harbaugh accused Greitens of “inciting violence to regain power,” arguing that he is “not the same person whose weddings I went to.” Harbaugh noted that he and his family members helped Greitens in his gubernatorial bid and stood by him following his resignation.

I have known @EricGreitens for 30 years. He is a broken man, who will do anything, including inciting violence, to regain power. He’s not the same person whose weddings I went to. Eric, drop out. Try to repair the damage you have done, to your family, your country, and yourself. pic.twitter.com/TA8DxzzSOF

“Some of my best memories are just the two of us figuring out how to build a veterans organization. How do we take the Clinton Foundation money or not? That giant portrait of JFK in your office spoke volumes about your leadership values. I remember when you [called] to say you were running for governor, you would decide to do it as a Republican, but I figured a pro-choice, pro-gay marriage governor would be a win for Missouri,” he said in the clip.

“You asked me to donate $5,000 — I didn’t have it. But I took out a loan against my life insurance policy and mailed you a check. Yes, if my mom, a lifelong Republican, could give this well, she did. Twice. Things have not gone as I expected. Eric, I want you to know that there are worse things in life than running for office honorably and losing. Trust me, I’ve done that. What you’re doing now is not honorable, and it is not a reflection of the Eric I know.”

Harbaugh went on to blast his former business partner for his rhetoric pushing unfounded claims that the 2020 election was stolen, alleging that Greitens believes the results were legitimate. Harbaugh, who unsuccessfully ran for a House seat in Ohio in 2018, indirectly slammed Greiten’s RINO-hunting campaign ad and encouraged him to work to repair his family dynamic following details of his divorce and allegations of abuse against his children and ex-wife.

Greitens’s campaign blasted Harbaugh’s calls for him to drop out, alleging that he is “jealous” of Greitens’s political successes.

“Ken is obviously a disturbed individual hoping to profit from his former friendship with the governor for 40 seconds of the leftist spotlight. He has now taken his grift to the Lincoln Project and the Obama Bros to peddle his weakness after being trounced in his Ohio congressional race,” the campaign said in a statement. “Ken obviously can’t stand to see others do well, so he tries to drag down the successful. In the end, his cringeworthy, jealous, and silly video shows the world who he truly is.”

Greitens’s campaign previously denied his ex-wife’s accusations of abuse and argued that the controversial ad was meant to be taken in jest.

Greitens released another gun-focused digital ad on Wednesday alleging that the establishment “came after” him for “standing up” for conservative policies.

Recent polling has shown Greitens in a neck-and-neck race for the Missouri GOP Senate nomination against Rep. Vicky Hartzler and state Attorney General Eric Schmitt, with the candidates within the margin of error of one another.