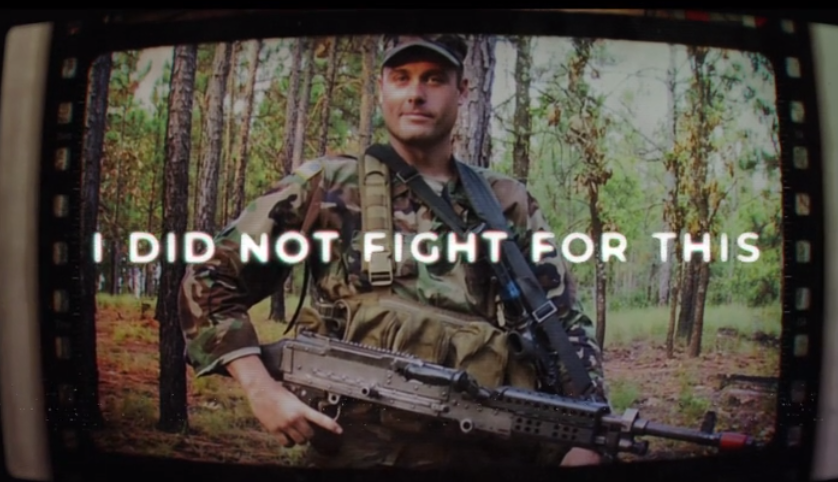 ‘I don’t put it past this bureau or department of justice to come after upstanding Americans who are trying to defend the concepts of America and uphold the rule of law.’

In the wake of the unexpected fallout sparked by an Aug. 8 media pitch, a military veteran has revised his plans to hold a protest at the FBI headquarters in Washington on Sunday, Aug. 14.

Following the unprecedented raid on the Mar-a-Lago residence of former President Donald Trump, an Aug. 8 media pitch announced that a 20-year military and former Special Ops veteran named Adam Hardage was “calling on fellow veterans and Americans of all walks to join him Sunday 8/14 at the FBI HQ in Washington DC to protest the out of control FBI and its actions against President Trump.”

However, the unexpected fallout that quickly ensued caused Hardage to revise his plans.

It all started with an Aug. 9 report about the proposed protest mentioned in the Aug. 8 media pitch.

The contact information was included in the media pitch for those who wanted to interview Hardage. While Hardage did receive requests for radio and podcast spots, the media relations company that sent out the media pitch confirmed that The Epoch Times was the only print/web news outlet to actually request and receive an interview with Hardage about his proposed protest.

There has been much speculation that Jan. 6, 2021 was a setup, a coordinated campaign to use the anger of those who believe the 2020 election was stolen against them in order to take down former President Donald Trump and arrest and incarcerate his supporters, with the goal of ultimately destroying the entire MAGA movement.

As The Epoch Times reported, evidence has emerged that proves protesters were peaceful until Capitol Police began lobbing tear gas and flashbangs into the crowd, shooting them with rubber bullets and spraying them in the face with pepper gel. Experts say a “cadre of provocateurs” then instigated fights, broke through bike rack barricades and encouraged protesters to storm the Capitol. Members of a secret, plainclothes Electronic Surveillance Unit were even embedded into the crowd, recognized to Capitol Police by a special multi-colored bracelet worn on their left wrist, for the express purpose of filming the ensuing confrontations between protesters and law enforcement for the purposes of entrapment.

It wasn’t long before speculation grew that the proposed protest at the FBI headquarters on Aug. 14, 2022 could be staged as a trap to ensnare protesters just like those who attended the protest at the Capitol on Jan. 6. 2021.

In response to the Aug. 9 report, chatter on social media and right-wing blogs ranged from support to warnings the proposed protest could be “a trap.” Other comments on social media posts suggest everything from the inevitable win of Trump in 2024 because of the raid to suggestions that the FBI planted evidence at the former president’s Mar-a-Lago residence. An Aug. 11 report said Trump’s supporters were warning people to “beware of possible FBI agents urging rebellion.”

Another social media post warned of the FBI saying, “We advise individuals taking part in protest activities to remain aware of their immediate surroundings and to report any suspicious activity to local law enforcement.”

Warnings of entrapment were followed by misinformation. The host of one social media video wrongfully attributed a quote from “another concerned veteran,” mentioned at the end of one report, to Hardage, inaccurately insisting Hardage said he wasn’t even planning on attending his own protest.

“I am a 20-year retired navy commander and J6 attendee,” the unnamed “concerned veteran” said in the Aug. 9 story. “I am incensed by the FBI raid on DJT’s home yesterday. I will be protesting an end to the FBI on the busiest intersection in my town of Kingwood, TX in full uniform Saturday.”

Hardage lives in Virginia with his wife and two children.

According to Dave Scarlett, a Marine and pastor of His Glory ministries, the proposed Aug. 14 protest would “most definitely” wind up being another Jan. 6 “trap.”

“If you’re in the Washington, D.C. area, there go your rights,” Scarlett told The Epoch Times. “Do not go into Washington. D.C. If you want a peaceful protest, do it outside of Washington. D.C.

“If you are truly representing the nation, patriots, Christians, and the military in this country, that is not the place to do it,” Scarlett said.

“It’s a trap. Stay out of it. Do not go there,” Scarlett warned. “I have many military intel sources who are former generals and they said exactly that. Do not go into Washington D.C., because it’s a trap.”

Hardage believes “the raid on Mar-a-Lago was a massive governmental overreach.”

He is not alone.

Even multiple high-profile Democrat politicians and liberal media outlets are calling the raid an unprecedented overreach that will require a lot of explaining.

While he also knows the Mar-a-Lago raid “was intended to scare Americans and to intimidate people,” Hardage believes the only thing it really accomplished was to “energize Trump’s base and the MAGA crowd.”

“I’m excited to see MAGA 2.0, because I think it’s going to be absolutely epic,” Hardage said. “It’s going to make the original Trump Train and Trump Wave look like a snooze fest.”

“The FBI and tyrants in Washington have overplayed their hand by desecrating the home of the People’s President and the most influential Leader of the Free World—a cowardly act previously only seen in Third-World countries,” Scarlett said in a statement issued after the raid. “They have not just attacked the rightful President, but every freedom-loving American Patriot in this country. This disgusting overreach of power and display of lawlessness
will go down in history as the exact moment they sealed their fate. I foresee a fully committed and united MAGA party, the likes of which has never been seen in this great nation. Christians, Patriots, Military, and every freedom-loving citizen will now unite. They have awakened a sleeping giant. We will once again be One Nation Under God, where justice, truth, and light prevails.”

“The FBI raid on President Trump’s home will go down in infamy as the turning point for a generation,” Green told The Epoch Times, adding that “the unknown is whether the turn will be towards complete tyranny or a turn back to liberty and the answer depends on whether we average Americans say enough is enough.”

“The church-going, hard-working, family and community-focused people that make up the backbone of America are not normally the type to protest,” Green said further. “They vote, they donate, they might write a letter of concern. None of that is enough anymore. Saving America from these Marxists will require a civically active, vocal, consistent citizenship and we’re about to find out if enough Americans are up to the challenge.”

Recent surveys appear to show that the rise of the “civically active” and “vocal” citizenry is already happening.

In the wake of the Jan. 6 protests, the government has done much to use the event against Donald Trump and anyone who supports him. The arrest, incarceration, and abuse of the protesters; the ongoing efforts of the Select Committee to convict Trump of insurrection and render him ineligible to ever run for office again; and the raid on Mar-a-Lago, some, like Rep. Louie Gohmert (R-Texas), believe “it’s about vengeance. It’s about intimidation.” Still, the silver lining behind these dark clouds is revealed through a string of recent surveys, which show a simultaneous frustration with growing government overreach, a spike in the number of Americans who believe the nation has a two-tiered justice system and an increase in the number of Americans becoming tangibly involved in civic activism.

An online survey by Daily Mail shows over 70 percent of their readers disapprove of the Mar-a-Lago raid. The Nationwide Issues Survey (pdf) conducted between July 24–28 by the Trafalgar Group with Convention of States Action found that 79 percent of 1,080 likely U.S. voters interviewed believe “there are two tiers of justice: one set of laws for politicians and Washington D.C. insiders vs one set of laws for everyday Americans.”

According to a national survey of general election likely voters conducted by McLaughlin & Associated for Summit Ministries from July 21–25, while 48 percent of American voters say their level of civic engagement has remained the same in recent years, nearly 30 percent said they have gotten more involved in the civic process within the last two years. Of those, 81 percent say they are civically engaged because they believe their activism is making a difference.

The first national survey taken after the FBI raid on Trump at Mar-a-Lago shows 83 percent of Republicans, 72 percent of independents, and 55.2 percent of Democrats are now more likely to vote in the 2022 Midterm Elections as a result of the raid. While only 11.9 percent of Democrats believe Trump’s political enemies are behind the FBI raid on the former president’s private home, 53.9 percent of Independent voters and 76.7 percent of Republican voters believe they are. More striking is that a majority of independents and Republicans believe the raid was unreasonable and that the raid is moving America closer to becoming a police state. Democrats, on the other hand, think such an invasion is completely reasonable.

A Change of Plans

“After the politically-motivated raid on President Trump’s residence at Mar-a-Lago, I initially called for a rally in the Northern Virginia/DC area,” Hardage told The Epoch Times amid the fallout from the Aug. 9 report. “My intent was to show solidarity and support for freedom, for the U.S. Constitution, and for President Trump. After receiving thousands of online comments and emails from across this nation from veterans on all sides of politics, I have decided to make a change to our plans to peacefully protest the FBI.”

While Hardage said the most common sentiment he received was in support of the protest, the warnings of Jan. 6-style entrapment raised some concerns.

“I don’t put it past this bureau or department of justice to come after upstanding Americans who are trying to defend the concepts of America and uphold the rule of law,” Hardage said. “This FBI and DOJ are anything but lawful.”

There was also the matter of some veterans saying they couldn’t make it all the way to Washington, like the “concerned veteran” who plans to “be protesting an end to the FBI on the busiest intersection” in his town of Kingwood, Texas, “in full uniform” on Saturday, Aug. 13. So instead of holding one rally in Washington, Hardage told The Epoch Times he is now encouraging all Americans, “especially the men and women who have served this great nation, to rally in their own hometowns in protest of what happened to President Trump.”

One CBS report showed people were already inspired to protest at the FBI headquarters in Riverside, California.

“I don’t care if it’s one veteran on a street corner holding a sign rebuking tyranny, or thousands who will be gathering with me as I speak at Clay Clark’s ReAwaken America Tour in New York this Saturday, our voices will be heard,” Hardage said. “I am also calling on all Americans to rally in support of their local political candidates who support an America-first agenda.  Get your friends involved and help us save America at the ballot box in 2022.”

Ultimately, Hardage believes what Americans are witnessing now “is nothing less than an attempted Marxist overthrow of the west and the United States.”

“It is coordinated. It is deliberate and it’s insulting to the American people,” Hardage asserted, “and quite frankly, the awakened patriot movement, the MAGA crowd, is not going to let this stand.”