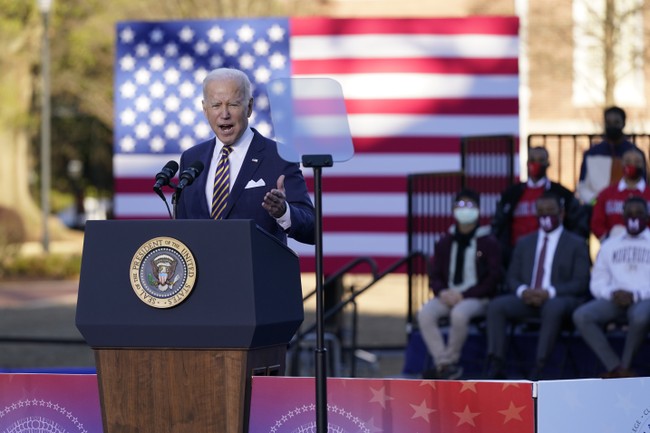 Early voting began in Georgia several days ago. There is, of course, intense interest in both the state’s Senate race, with University of Georgia football legend Herschel Walker challenging Democratic Sen. Raphael Warnock, and the governor’s race, between Gov. Brian Kemp and Democratic challenger Stacey Abrams. Kemp is going to win, but the Senate contest is essentially tied. Its outcome might well determine which party controls the Senate.

How intense is voter interest in Georgia? Just look at turnout. People are voting early in droves. Record numbers. More than ever in a midterm election. The evidence comes from the Georgia Secretary of State’s office in a weekend press release headlined, “Georgia Voters Shatter Second Presidential Turnout Record on Saturday.” In other words — more people are voting in the midterm election, at this stage of early voting, than voted in the 2020 presidential election. That is huge.

The numbers: Through Sunday, 740,615 Georgians have voted early in person. Another 76,247 have voted absentee, for a total of 816,862. “Saturday’s total marks an astounding 159% increase from day six of 2018 midterm early voting and shattered the turnout record of day six of early voting in the 2020 presidential election by 20%,” the office said.

Many of the early voters are black. Indeed, the group Black Voters Matter issued a press release celebrating black turnout in the first days of voting. “Black Voters in Georgia have done it again!” the group said. “Voter turnout in Georgia reached historic highs on the first day of early voting in this midterm election, and Black Voters comprised 35% of all those who turned out to vote. … We at Black Voters Matter never doubted the commitment of Black voters to use the ballot box to bring about change.” About 30% of Georgia’s registered voters, and about 33% of its population as a whole, are black, meaning the black turnout in early voting is quite strong.

Of course, the numbers are remarkable in themselves. But what makes them truly extraordinary is that Georgia’s enthusiastic turnout is coming after many Democrats, including the president of the United States, pronounced Georgia a hellhole of voter suppression in which racist authorities imposed Jim Crow-era rules in an effort to prevent thousands, or tens of thousands, or hundreds of thousands of Democrats, many of them minorities, from voting. The cause was a new voter reform law passed by the Republican-controlled Georgia legislature. Time after time, the president referred to the law as “Jim Crow.”

Did he really say that? Yes, he did. Here are eight examples:

On March 25, 2021, Biden said, “This makes Jim Crow look like Jim Eagle. I mean, this is gigantic what they’re trying to do, and it cannot be sustained.”

On June 22, 2021, Biden praised Democrats in Congress for standing together “against the ongoing assault of voter suppression that represents a Jim Crow era in the 21st century.”

On July 26, 2021, Biden decried “attacks on the right to vote unseen since the days of the Jim Crow system.”

On Oct. 21, 2021, speaking at the Martin Luther King Jr. Memorial in Washington, Biden said, “Jim Crow in the 21st century is now a sinister combination of voter suppression and election subversion.”

On Jan. 11, 2022, speaking in Atlanta, Biden said, “Jim Crow 2.0 is about two insidious things: voter suppression and election subversion. … It’s not hyperbole; this is a fact.”

Biden’s words, which were echoed by the vice president, Democrats in the House and Senate, Democrats in state legislatures and their many allies in the media, were the inspiration for literally thousands of references to Jim Crow in public discussion of the Georgia law. The point was clear: This was a racist voter-suppression law.

Biden’s Justice Department filed suit against Georgia, alleging that “several provisions [of the law] were adopted with the purpose of denying or abridging the right to vote on account of race.”

Big corporations and institutions got involved, too. The 2021 Major League Baseball All-Star Game was scheduled to be held in Atlanta, but MLB officials were scared by all the controversy. Biden said publicly that he would “strongly support” moving the game out of Georgia. The league went along, ordering that the game be played in Denver instead. The move cost the state of Georgia and its citizens millions of dollars.

Delta Airlines is Georgia’s biggest employer. On March 31, 2021, CEO Ed Bastian wrote, “I need to make it crystal clear that the final bill is unacceptable and does not match Delta’s values.” Another big Georgia-based business, Coca-Cola, said something quite similar. “I want to be crystal clear,” said Coke CEO James Quincey, “The Coca-Cola Company does not support this legislation, as it makes it harder for people to vote, not easier.”

So now, huge numbers of Georgia voters, including huge numbers of black voters, are taking part in the 2022 midterm elections. There is no Jim Crow 2.0. There is no Jim Crow on steroids. There is no 21st-century Jim Crow. It should be said that this is not a surprise. Many observers noted at the time that the Georgia bill would make incremental improvements in the state’s voting procedures and would not in any way hinder the ability of Georgians to vote. They noted at the time that Biden’s Jim Crow talk was ugly demagoguery. They tried, unsuccessfully, to cool down all the media talk that amplified Biden’s ugly demagoguery.

In the end, the Georgia legislature and other state officials did not back down. The law is now in effect. And voters are voting in droves. Voting is so suppressed that turnout records are being broken on a daily basis. Do not look for President Biden or those who echoed his words to apologize. That’s not going to happen. But events have proven them wrong, wrong, wrong.

This content originally appeared on the Washington Examiner at https://www.washingtonexaminer.com/opinion/exposing-bidens-jim-crow-2-0-slander.

(Byron York is chief political correspondent for The Washington Examiner. For a deeper dive into many of the topics Byron covers, listen to his podcast, The Byron York Show, available on the Ricochet Audio Network at ricochet.com/series/byron-york-show and everywhere else podcasts are found.)