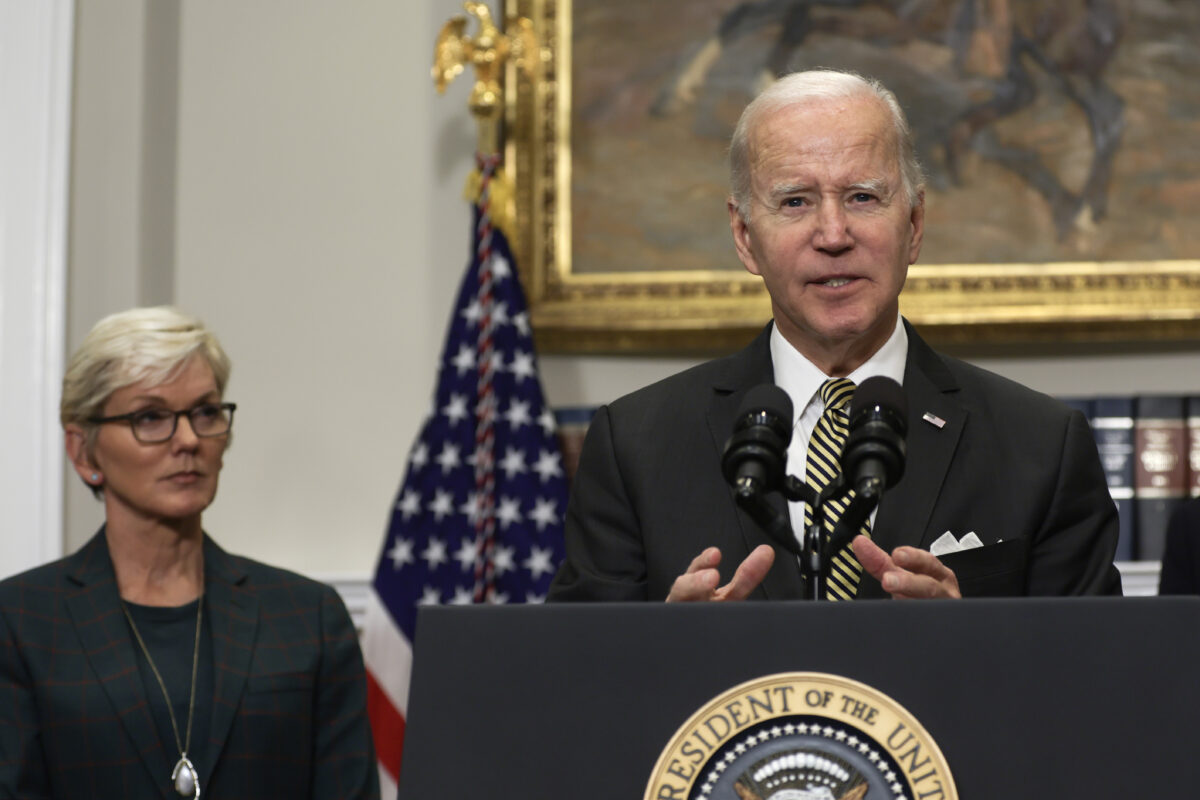 WASHINGTON—High gasoline prices are the problem that President Joe Biden keeps trying to fix—and roughly a year’s worth of efforts have done little to significantly lower costs.

With Biden’s latest push Wednesday to release 15 million barrels from the U.S. strategic reserve and consider additional withdrawals this winter, he’s telling frustrated voters ahead of the midterm elections that the White House hasn’t given up.

He rejected the notion that politics played a role in his latest action. But the issue has clear political implications as the president’s approval rating has moved inversely with changes in gasoline prices, which remain high despite coming down since a June peak.

“They’re not falling fast enough,” Biden said in remarks at the White House. “Families are hurting. You’ve heard me say it before, but I get it.”

Biden has consistently said that high prices are the fault of Russia invading Ukraine at the start of this year. Any declines in gas prices—no matter their magnitude—the president attributes to his policies. Biden denied his latest move was about the upcoming elections, even though he told The Associated Press in an interview earlier this year that his approval ratings seem to move in the opposite direction from gas prices.

“It’s not politically motivated at all,” Biden said Wednesday in response to reporters’ questions.

The open question is whether the announcement makes a difference with voters in Senate and House races in November that could be decided by razor-thin margins. Biden’s announcement comes as gas prices have declined over the past two weeks. Yet a gallon of gas still averages $3.85, up from a year ago when Biden called $3.35 a gallon a strain on families and from roughly $2.40 a gallon during his 2021 inaugural.

The withdrawals have sent the nation’s strategic reserve to its lowest level since 1984 in what the administration called a “bridge” until domestic production could be increased. The reserve now contains roughly 400 million barrels of oil, a level that opponents say has more to do with Biden’s attempts to help his fellow Democrats than spur more oil production in the United States.

During Tuesday night’s Florida Senate debate between Republican Sen. Marco Rubio and Democratic U.S. Rep. Val Demings, Rubio complained that the United States is “begging” other countries for oil and depleting its own reserves to help Democratic candidates.

“Our oil reserves do not exist to win midterms,” Rubio said. “They exist to help this country in an emergency or in the midst of a storm.”

The president’s political fortunes do appear to be tied to gas prices. In AP-NORC Center for Public Affairs polling, support for Biden recovered from a low of 36 percent in July to 45 percent in September. That period largely overlapped with a decline in prices from record levels. Prices began to rise again toward the end of September, only to drift down slightly in recent weeks.

Biden also wants to open the door to additional oil releases this winter in an effort to keep prices down. But administration officials would not detail how much the president would be willing to tap, nor by how much they want domestic production to increase to end the withdrawals.

Biden said the U.S. government will restock the strategic reserve when oil prices are at or lower than $67 to $72 a barrel, which administration officials said will support domestic production by guaranteeing a baseline level of demand. At the same time, he renewed his criticism of the profits reaped by oil companies—repeating a bet made this summer that public condemnation would matter more to these companies than shareholders’ focus on returns.

The offer to repurchase oil to fill the reserve could be meaningful to voters, as it could lead to greater production in the United States. That could possibly blunt Republican criticism that Biden should boost output by making more federal lands available for drilling and approve the construction of pipelines for transportation.

An analysis Monday by ClearView Energy Partners, an independent energy research firm based in Washington, suggested that two states that could decide control of the evenly split Senate—Nevada and Pennsylvania—are sensitive to energy prices. The analysis noted that gas prices over the past month rose above the national average in 18 states, which are home to 29 potentially “at risk” House seats.

The call to increase production marks the continuation of an about-face by Biden, who has tried to move the United States past fossil fuels and toward additional sources of energy to satisfy U.S. and global supply.

The prospective loss of 2 million barrels a day—2 percent of global supply—by OPEC+ has had the White House saying Saudi Arabia sided with Russian President Vladimir Putin and pledging there will be consequences for supply cuts that could prop up energy prices. Biden’s latest 15 million-barrel release would not cover even one full day’s use of oil in the United States, according to the Energy Information Administration.

Even if voters want cheaper gasoline, expected gains in supply are not materializing because of a weaker global economy. The U.S. government last week revised downward its forecasts, saying that domestic firms would produce 270,000 fewer barrels a day in 2023 than was forecast in September. Global production would be 600,000 barrels a day lower than forecast in September.

Biden said his commitment to replenish the reserves should give U.S. energy companies enough confidence to ramp up production, even as the administration pushes to switch to renewable energy.

“We’re giving you more certainty, so you can act now to increase oil production,” Biden said.