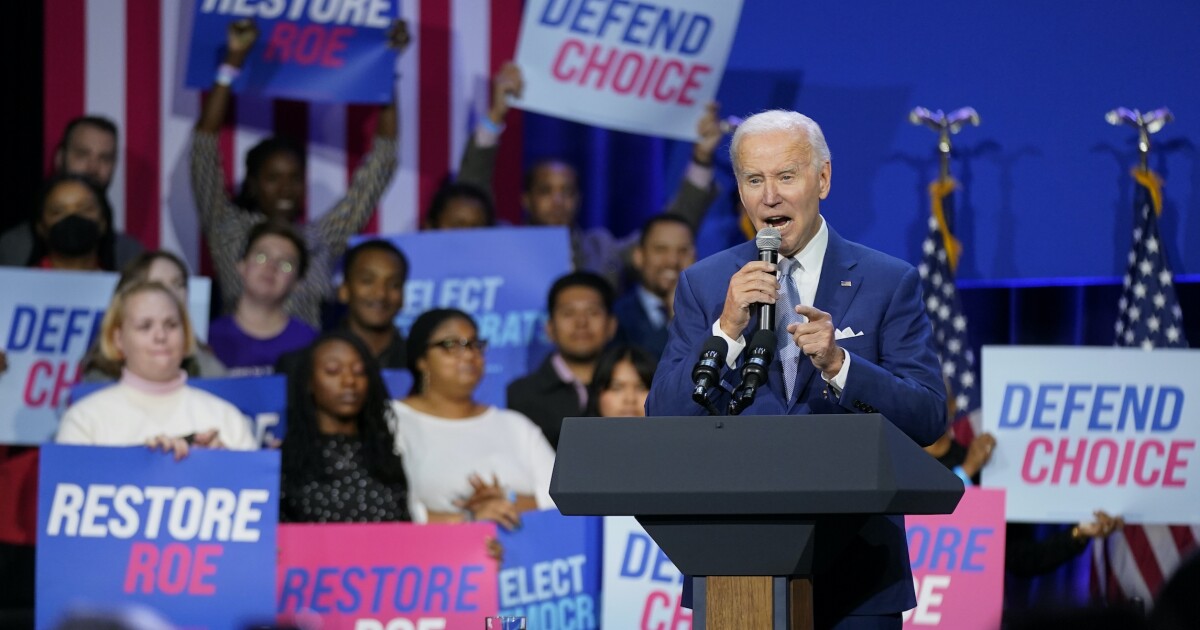 President Joe Biden vowed Tuesday that the first bill he would send to Congress would codify Roe v. Wade and that he would sign it into law on the 50th anniversary of the landmark Supreme Court abortion decision — if Democrats retain their congressional majorities.

Biden made the comment in a short but wide-ranging political stump speech at Howard Theater in Washington, D.C., but he has staked Democrats’ chances in November on the backlash against the Supreme Court’s reversal of Roe over the summer in the Dobbs v. Jackson Women’s Health Organization case.

“If we do that … the first bill that I will send to the Congress will be to codify Roe v. Wade,” Biden said of Democratic gains in November.

The Senate is currently split 50-50, under Democratic control solely because of Vice President Kamala Harris’s tiebreaking vote. Republicans could regain the majority with a net gain of one seat.

Even at the current Democratic numbers, the party cannot break a Republican filibuster of federal abortion rights legislation. The specific bill Congress has voted on does not have the support of all 50 Democrats or any pro-choice Republican senators because it is widely seen as nullifying state-level abortion restrictions and allowing post-viability abortions.

The Democrats’ House majority isn’t much larger, and Republicans are heavily favored to win that chamber in November. But the GOP’s Senate prospects are more tenuous.

If the Democrats were to gain Senate seats in November, a tall feat, they could potentially eliminate the filibuster and advance the legislation.

The 50th anniversary of Roe would take place on Jan. 22.

Biden vowed to sign any such bill into law. But if Republicans take control and enact national abortion restrictions, he pledged, speaking in a whisper, to “veto it.”

Most polls show inflation and the economy as the top voter concerns. But abortion is a major motivator for Democrats and a factor in races across the country.