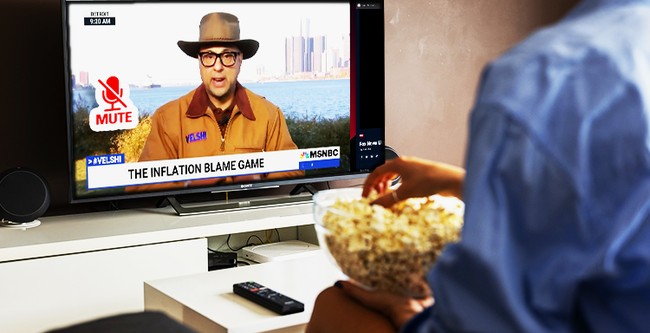 The press continues to get desperate as the polls show strong voter interest in the condition of our economy, ignoring the years of pleading from the media that January 6 and abortion are really extra, super important and that you are selfish for focusing on your personal challenges and not voting based on the pet causes of journalists!

In an attempt to tamp down this voter concern, Ali Velshi delivers a lecture on the proper approach to this topic: Get over yourselves!

Velshi explains how other countries have higher inflation rates, demonetized currencies, and far greater challenges than you are facing here in the States. See? So you are not watching your paycheck evaporate before the weekend is out and losing your savings by the week! Now go get concerned over issues that do not affect you directly, like Elon Musk buying Twitter and trans rights for teens to get mastectomies!

The good thing is this message from Ali is likely to be completely ignored, as viewers are likely distracted by his goofball hat and the fact that he seems to be sporting a jacket from his own personal label from his Autumn tactical wear line of clothing.

Ali Velshi: You might not like how the Biden administration or the Federal Reserve is handling inflation, but the problem is a global one, not one created by this White House…there are 100 economies with higher inflation rates right now than America. https://t.co/7QWge4nzwu pic.twitter.com/F1SugcGH3Y

No matter what the polls indicate, you are starting to get a real sense that the accurate figures are pointing at a massive red tidal wave in the coming election. A sign of this is from Nicolle Wallace, who appears to be in panic mode over the impending results, so much so that she is wantonly contradicting her own position regarding elections.

Recall we went through years of hearing how foreign influence in our elections was wrong. Also, we have been bludgeoned by this same press corps telling us the 2020 election was the most secure ever. Now suddenly, a GOP wave is cause for concern, and our system is reduced to the same level as an emerging third-world nation.

“At some point the U.S. is going to need to collectively decide that not only are we going to oppose Russians and Chinese and North Koreans and Iranians messing around with our elections, we’re not gonna allow the Republican Party to do it either” – @jahimes w/ @NicolleDWallace pic.twitter.com/36EeZvcwGF

Before we begin, let us assure you of something – Max Boot did, in fact, write once again about how he does not like his former party, the MAGA/Trump/Republicans. We want to be sure to alleviate any confusion and possible anxiety that Mr. Boot would deviate from his usual performance, possibly writing anything original, so be calm.

Now he does manage to at least find a way to include the coming election into his column template. He suggests that if people vote against his better wishes, this could become a threat to our democracy. He even says the upcoming vote is “a referendum on democracy.” Uh-huh, he wrote that. Max Boot suggests that giving people the right to vote for a particular result could lead to the end of people…um, having a right to vote for their desired result. He even says it is a referendum; the democratically set fashion people express their intentions. So, therefore, if you democratically vote the wrong way, democracy will die. It is better if we just let Max tell you how to vote, as he knows what is in your best interests.

If the current trends hold up, Republicans are likely to take over at least the House and quite possibly the Senate, too, along with many state offices.

This is how democracies die, both at home and abroad. https://t.co/L19xGFbC7x

For months, we have been getting updates on the new platform called Semafor from the unrelated duo of Ben Smith and Justin Smith. They have been gathering writers and getting advanced press coverage about their new format of presenting news. They also had a delayed rollout adding to the hype, but now they have gone live, and they also have a variety of newsletters of varying topics to offer up.

One of those is a bit curious in that it has a curious backing. We are not too surprised to see them dedicating one of their email letters to the environment; it just strikes us as a bit curious to see it delivered with promotional support from one of our Big Oil conglomerates.

The launch of @Semafor has arrived, and they have a climate-based newsletter among those offered.
It is..uh, sponsored by an old company. pic.twitter.com/CH4Io9ZrbN

There has been a regular narrative among the journalism eggheads in recent years that covering politics with the balanced and equal “both sides of the story” approach is not only outmoded, but these days it is downright pernicious. The argument goes that since Republicans are “the dishonest party,” giving them equal time is a disservice, and it helps to spread disinformation.

The latest comes from NYU journalism professor Jay Rosen, who bemoans giving Republicans equal time on the subject of political disenfranchisement, saying it is wrong to equate Democrats frustrated with gerrymandering to GOPers frustrated with other influences. Already you see the problem, as he needs to pretend Democrats do not gerrymander where they are in control.

Following his lead was Michael Calderone, himself a one-time J-school professor, who delivered a telling quote basically establishing that you do not need to report on both sides because delivering only the truth is what matters. So, these people teaching the next class of journalists sit on the belief that only Democrats are the politicians who tell the truth.

What Joe Kahn told @VanityFair in June: “The idea that the Times is stuck in some 1980s paradigm of both-sides journalism, where we don’t help readers sort out what’s really true or untrue, is pretty factually false.” https://t.co/El0r5GB3ZQ https://t.co/c9QRb6QT0O