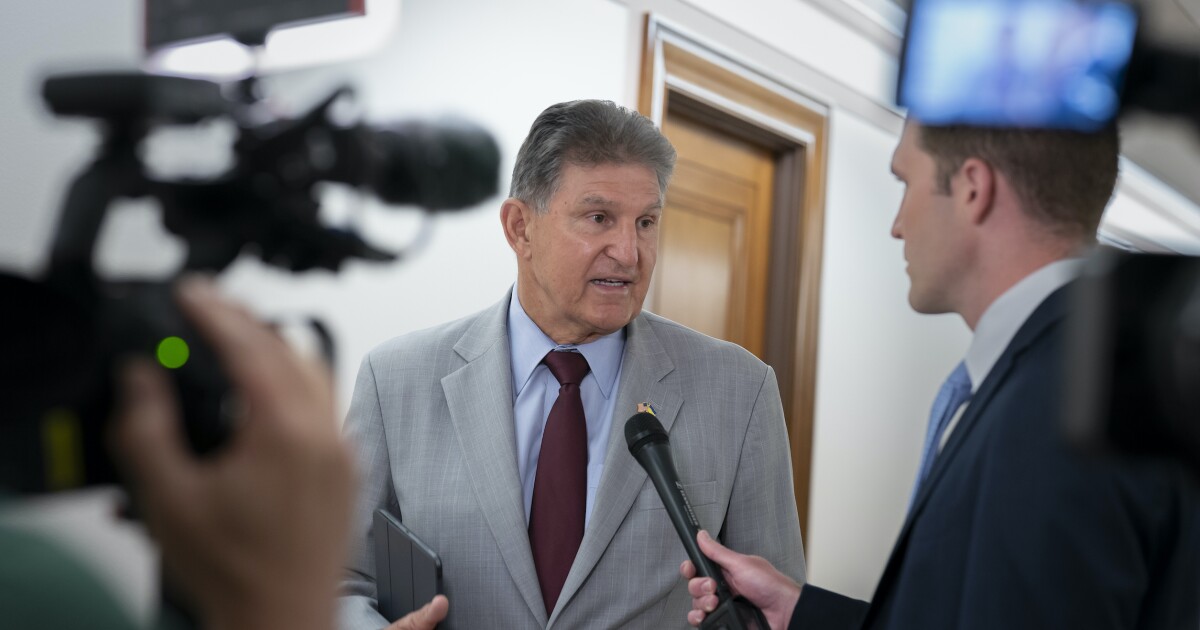 Leaving Manchin’s intentions aside, the centrist Democrat has bucked his party’s liberal flank on a number of key items.

Manchin said last week he would not support provisions in Democrats’ proposed economic legislation that would allocate spending toward climate change or increase certain taxes, citing his concern over rising inflation.

The announcement, a blow to revived negotiations that ended shortly before Christmas over a bigger version of the legislation, was a blow to Democrats seeking legislative victories before the midterm elections in November with their congressional majorities at risk. Manchin, who is not on the ballot this cycle, blasted the left flank of his party, arguing they were placing “political headlines” over “economic realities.”

“Political headlines are of no value to the millions of Americans struggling to afford groceries and gas as inflation soars to 9.1%,” Sam Runyon, a spokeswoman for Manchin, told the Washington Post. “Sen. Manchin believes it’s time for leaders to put political agendas aside, reevaluate, and adjust to the economic realities the country faces to avoid taking steps that add fuel to the inflation fire.”

The move sparked the ire of many Democrats, including Rep. Ilhan Omar (D-MN), a member of “the Squad,” a group of House liberals. In an MSNBC interview, Omar called Manchin’s announcement “really disappointing” but unsurprising and questioned why Senate Majority Leader Chuck Schumer (D-NY) permits Manchin to lead the Senate Energy and Natural Resources Committee.

“I think we ultimately have to come to terms that what we are doing at the moment and the way that we are dealing with Manchin isn’t working in advancing the Democratic agenda and the president’s agenda,” Omar said. “So, we must change course.”

After months of negotiations and a larger House-passed version of the bill, Manchin said shortly before Christmas that he would not vote for the $2.4 trillion social welfare and green energy bill, arguing its price tag was too high. Manchin’s position frustrated Democratic leadership, who had already trimmed the bill in an attempt to negotiate with him, and sparked the wrath of liberals who thought the bill should have been larger.

Without Manchin’s support, Democrats were left unable to pass the legislation in the Senate, where they could have otherwise passed the bill using a process called budget reconciliation, which would allow them to do so with only 51 votes.

Rep. Alexandria Ocasio-Cortez (D-NY) told an Instagram follower over the weekend who asked why “things get passed in the House faster than in the Senate” that it is because “the House doesn’t have Joe Manchin in it.”

Manchin, as well as Sen. Kyrsten Sinema (D-AZ), has come under fire from members of his party for his continued support of the Senate’s filibuster rules, which require most votes to clear 60 votes to pass. Both senators have reiterated their support for the filibuster since the Supreme Court issued its ruling in Dobbs.

Manchin’s office has repeated his support for the filibuster, with one lengthy January release detailing his longtime support for the rule saying, “MANCHIN AGAIN REITERATES HIS COMMITMENT TO PROTECTING FILIBUSTER.”

But even if Senate Democrats successfully changed or bypassed the upper chamber’s filibuster rules, they would still be unable to pass their sweeping abortion rights legislation, which Manchin opposes.

After the Supreme Court struck down Roe v. Wade, the House again passed the Women’s Health Protection Act, legislation that would make it a right for a woman to undergo an abortion, override certain state laws restricting those procedures, including mandatory waiting periods and bans on abortions via telemedicine, and require that providers have admitting privileges at nearby hospitals.

The legislation passed the House but went on to fail in the Senate during a procedural vote.

Proponents of the bill argue it would codify the standards previously set by Roe into law, while opponents say the bill goes beyond what Roe permitted by undoing state-level restrictions that had previously been upheld by courts with Roe still in place.

Manchin, who has said he is personally anti-abortion but supports the legal standard set by Roe, was the lone Senate Democrat to oppose the legislation, which he argued went too far beyond Roe.