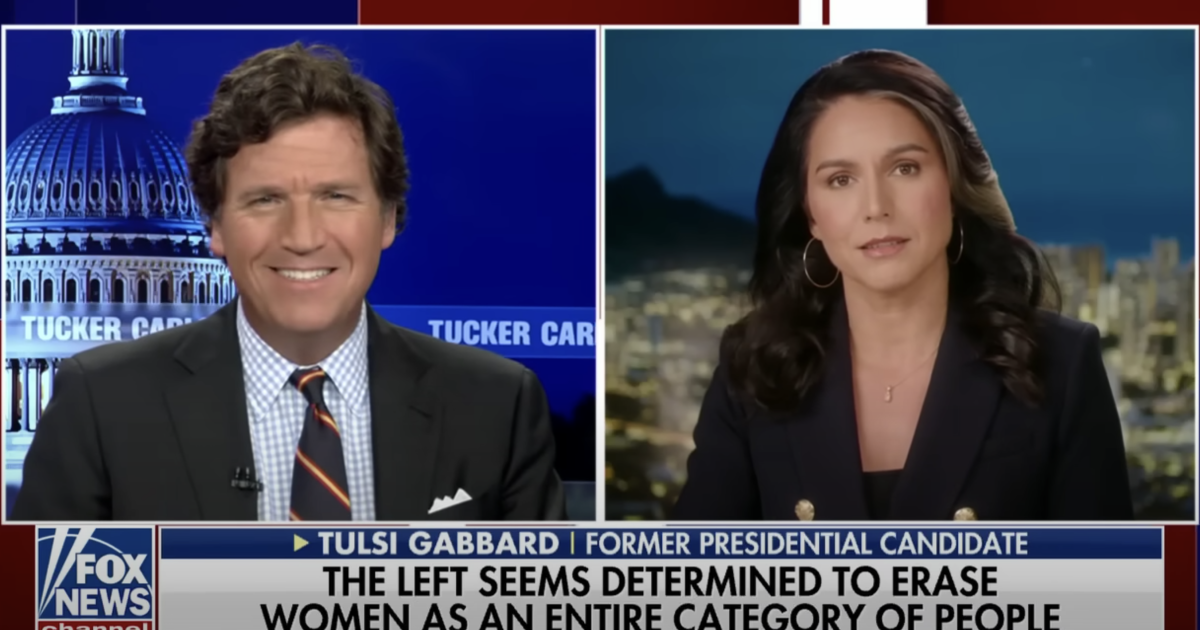 Former Democratic Hawaii Rep. Tulsi Gabbard claims modern-day feminists are “hypocrites” who are actually “trying to erase women” as a category of people.

“Today’s self-proclaimed feminists will not define what a woman is, and are unfortunately actively seeking to erase the progress that Title IX has made over the last 50 years,” Gabbard told Fox News host Tucker Carlson on Tuesday evening.

“I served in Congress for eight years. And this has been something that’s building and growing over time,” she said.

Gabbard, who recently left the Democratic Party, said actions by the Biden administration are actively seeking to undo Title IX, including blurring the lines of recognition of the differences in biological sex between men and women.

The former congresswoman, who also vied for the Democratic Party’s nomination for president in 2020, posted a video to her social media this week previewing an interview with swimmer Riley Gaines.

Gaines soared to notoriety when she spoke out against transgender swimmer Lia Thomas, who is biologically male but competed as a female at the University of Pennsylvania.

“[Gaines] has direct experience of the consequences of what this administration is doing, in that she was forced to compete against a biological male for the national championship,” Gabbard said.

“She was sidelined in the interest of this fear-filled culture where you’ve just got to go along to get along, no matter the fact that you’re actually denying the existence of objective truth,” she added.

Gabbard said society and Biden administration officials are even trying to change the language to erase the words woman, mother, and sister from our vocabulary.

This is dangerous, she noted, because when “we no longer believe that what is true is true, then what we’re left with is no boundaries,” Gabbard said. “And those in power being in a position where they and only they define and tell us what is true, and what is false.”

“And we end up with pure insanity,” she added.