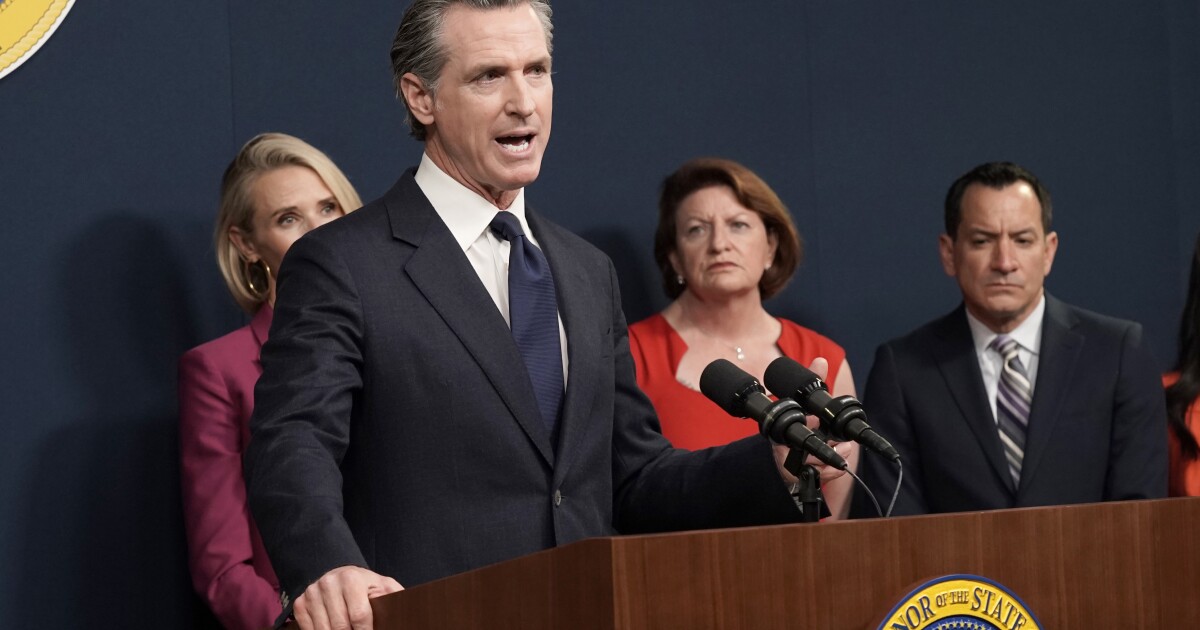 California Gov. Gavin Newsom took aim at Florida on Wednesday during a speech on education, renewing attacks pointed in the direction of Gov. Ron DeSantis as anticipation builds for a 2024 matchup.

In his remarks to the National Forum on Education Policy in Washington, D.C., the Democrat chastised Florida for its new restrictions on social emotional learning, claiming that it surpassed critical race theory as the “meme of the moment.”

Social emotional learning, which refers to the self-awareness, self-control, and interpersonal skills teachers believe students should learn in order to be successful later in life, became a target of the GOP after critics warned that the curriculum was the latest attempt to introduce liberal ideologies in the public school system.

Newsom also singled out DeSantis’s press secretary, Christina Pushaw, who called opponents of Florida’s Parental Rights in Education law “groomers” in March. She also referred to the bill, which was signed by the governor, as the “Anti-Grooming Bill.”

The bill restricts school discussions about “sexual orientation and gender identity” from kindergarten to the third grade in a “manner that is not age-appropriate or developmentally appropriate.” The bill also requires school boards to establish parental notification procedures about their rights to make “decisions regarding the upbringing and control of their children.” Critics of the bill have labeled it the “Don’t Say Gay” bill.

“I say grooming — yeah, it should offend,” Newsom said in his speech. “The press secretary for the governor, and I know a lot of people are offended by saying it’s not really a ‘Don’t Say Gay’ bill, but referred to those that opposed it in Florida as ‘groomers.’ I think she was promoted, not fired. Certainly wasn’t fired.”

Pushaw responded to the governor’s message by thanking him for the shoutout and stood by her remarks on her personal Twitter account.

Thanks for the shout out at your speech in DC today @GavinNewsom. You're correct, I was not fired for defending Parental Rights in Education. Do you fire people in California for stating that kindergarteners shouldn't be indoctrinated in gender theory behind their parents' backs?

“Opponents of the Parental Rights in Education law, by definition, support adults talking to young children about sexuality and gender ideology while keeping these conversations secret from those kids’ parents,” Pushaw told the Hill. “I cannot think of a more politically correct word for an adult who advocates for instructing young children (ages 4-9) about sexuality and gender theory while concealing that instruction from the child’s parents. If there is a polite word for such behavior, I’d use it instead.”

Newsom also argued that other conservative leaders were attacking personal freedoms, including by censoring free speech as seen in the parental bill, and the Stop W.O.K.E. Act, which seeks to prohibit anyone from feeling bad about their race or gender. Both bills were signed by DeSantis this year.

“I believe education is under assault in ways I’ve never seen in my lifetime, [from] banning books, suppressing speech, to the othering of our students, teachers, parents,” Newsom said.

Newsom also criticized Texas for reallocating funds from its mental health budget and used it for the U.S.-Mexico border instead.

Newsom is ramping up the broadsides against DeSantis as both governors are talked about as 2024 presidential candidates should they choose to run, even as they both run for reelection in their respective states. Newsom’s campaign recently paid for ads against DeSantis and encouraged families to move to the West Coast instead.

“Freedom, it’s under attack in your state. Republican leaders, they’re banning books, making it harder to vote, restricting speech in classrooms, even criminalizing women and doctors,” Newsom said in the video.

Newsom arrived in Washington on Tuesday to accept an education award on behalf of the state and will return to California on Friday.