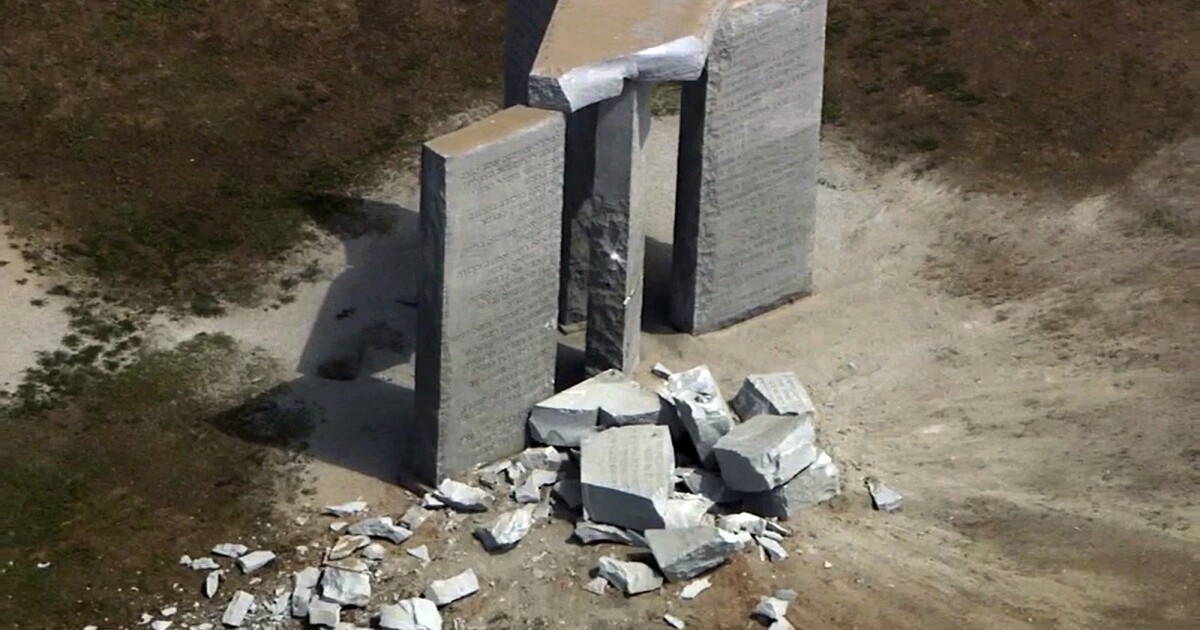 Following extensive damage from an apparent explosive device, the mysterious Georgia Guidestones have been brought down. The structure was damaged early Wednesday morning in an apparent act of vandalism.

The Georgia Bureau of Investigation stated at noon that around 4 a.m. on Wednesday morning, “unknown individuals” detonated an explosive device that destroyed a “large portion” of the mysterious structure.

A video taken by SKYFOX showed that one of the four pillars of the structure had been completely destroyed, damaging the granite slab it was supporting.

(1/3) The GBI and Elbert County Sheriff’s Office are investigating an explosion that destroyed the Georgia Guidestones near Elberton, GA.

The preliminary information indicates that unknown individuals detonated an explosive device at around 4:00 a.m. on Wednesday, July 6th.

By 5:16 p.m., an image shared on Twitter by journalist Myra Ruiz showed the remnants of the Guidestones torn down by a construction crew. The reason for the toppling of the remaining three monoliths is not yet clear.

The Georgia Guidestones, dubbed “America’s Stonehenge,” are described by the Elberton Granite Finishing Corporation as a 19-foot set of granite monoliths that serve as an astronomical calendar and are engraved with a 10-part list of instructions regarding the conservation of mankind.

The original sponsors of the Guidestones have remained unclear since the unveiling of the structure in 1979, along with the structure’s actual meaning.

The Guidestones have become a major tourist attraction in Georgia, drawing 10,000 visitors every year, according to the Elbert County Chamber of Commerce. However, the mysterious nature of the structure has also drawn the attention of conspiracy theorists, some of whom claim that the structure is “satanic” or meant to usher in a totalitarian world government, according to the Smithsonian magazine.

Elberton Granite Association Executive Vice President Kris Kubas told Fox5 Atlanta that stationary cameras were installed around the Guidestones following previous acts of vandalism. The cameras operate at all times and feed back to a 911 dispatch center.

Conspiracy theories surrounding the Georgia Guidestones gained prominence in May, when Georgia gubernatorial candidate Kandiss Taylor posted a video on Twitter in which she vowed to tear down the structure if she was elected, an act she claimed would “bring the Satanic Regime to its knees.”

Taylor took to Twitter on Wednesday to celebrate the news of the Guidestones’ partial destruction, claiming that it was God who struck down the “Satanic Guidestones.”

God is God all by Himself. He can do ANYTHING He wants to do. That includes striking down Satanic Guidestones.

When reached for comment, the GBI told the Washington Examiner that it is not releasing information regarding suspects at this time.