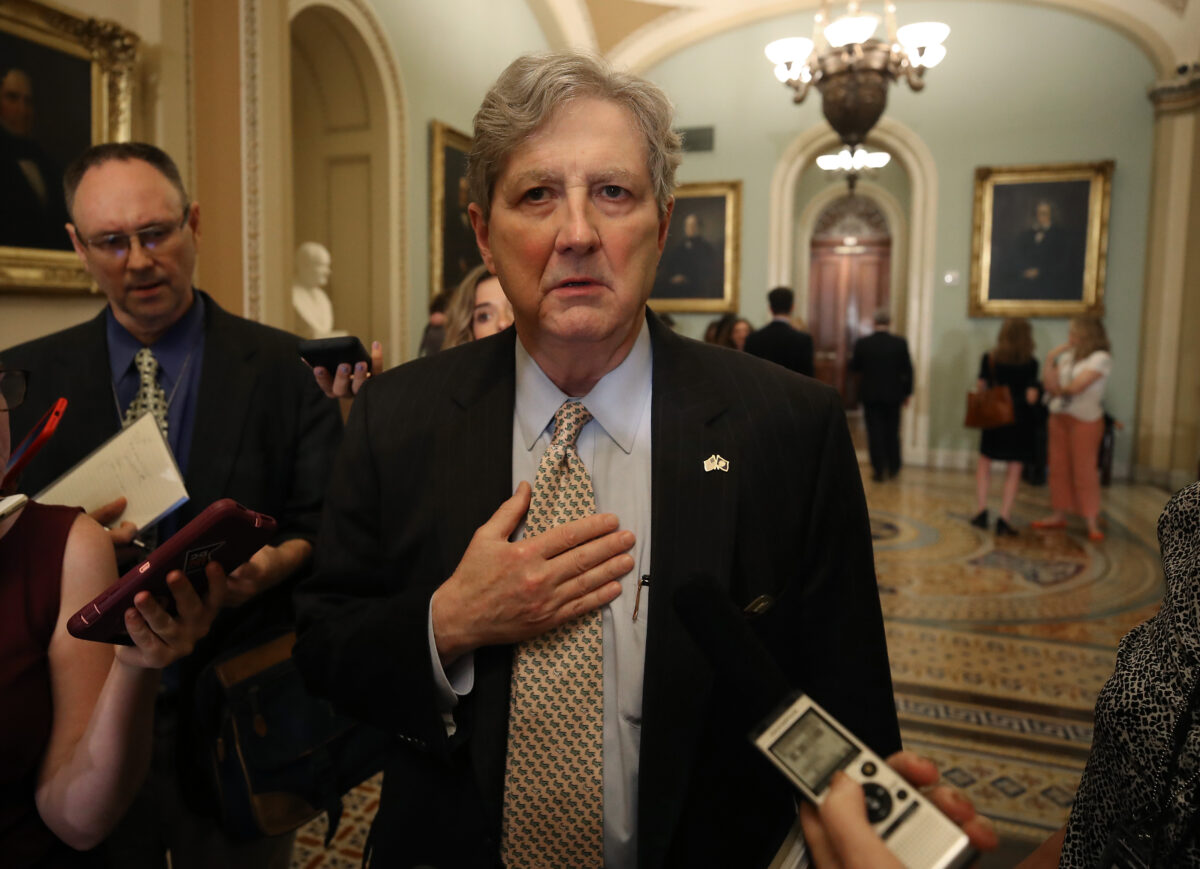 Sen. John Kennedy (R-La.) has said that inflation is a direct result of President Joe Biden’s policies as the cost of living has soared across the United States.

The Senate Judiciary Committee member took aim at Biden in an interview with Fox News’ “Jesse Watters Primetime” on July 26.

“After 18 months, we know what President Biden stands for,” Kennedy stated. “If you don’t know by now, you are as thick as a brick. He believes in bigger government, higher taxes, more spending, more debt, more regulation, open borders, a weaker military, and turning cops into social workers. And those policies have hurt the American people deeply.”

But Kennedy said that in no respect has the Biden administration hurt the American people more than in their pocketbooks.

“I’m talking about inflation,” he said. “Inflation, which is a direct result of the president’s policies, is a cancer on the American Dream, and it is rampant. It is unrestrained.”

Inflation has climbed steadily since Biden took office, reaching 9.1 percent in June and leaving Americans feeling the squeeze when it comes to purchasing everyday essentials and filling up their gas tanks.

A recent survey by AAA found that nearly two-thirds of Americans polled said they have changed their driving habits or lifestyle since March 2022 in an effort to offset soaring gas prices.

At a July 22 rally in Arizona, former President Donald Trump also took aim at Biden’s handling of rising inflation, telling rally-goers that the true rate of inflation is far higher than the official rate.

During his interview with Watters, Kennedy said he believes the solution to rampant inflation is “so straightforward” before calling on the Federal Reserve to stop spending and instead remain within the federal budget.

He also suggested reducing the deficit and freezing all proposed federal regulations, which he said are “just going to add to the cost of goods and services.”

The GOP lawmaker said America should regain its energy independence and extend the Tax Cuts and Jobs Act, which he said is set to expire within the next two years.

“If you do those things, in my judgment, inflation will start to abate in a matter of months. And if you don’t do them, we are just going to continue to be face down in the desert” he said.

The Fed is hoping to get inflation back to the target of 2 percent but noted in a revised statement that indicators of spending and production have softened. The labor market remains strong and the unemployment rate is low, the Fed said.

“Russia’s war against Ukraine is causing tremendous human and economic hardship,” the FOMC said in a statement. “The war and related events are creating additional upward pressure on inflation and are weighing on global economic activity.”

The FOMC added that the committee is “highly attentive to inflation risks.”