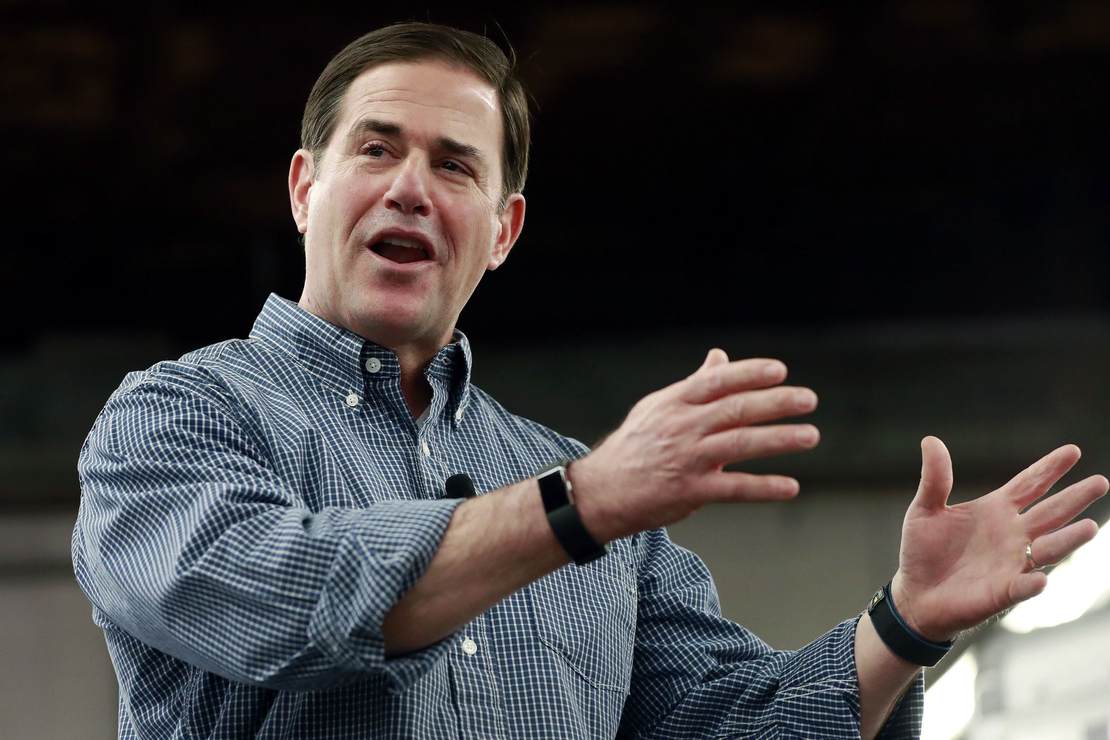 The State of Arizona is committing $564 million to secure its southern border. Governor Doug Ducey announced that $335 million out of the $564 million is earmarked for border fence construction and technology improvements. The plan is to build a “virtual border wall” to handle the state’s growing problems with illegal migration.

Governor Ducey cites Joe Biden’s “inaction” on immigration and supporting the rule of law. The plan is to install motion sensors, infrared cameras, and aerial drones to create a “virtual fence”. The federal government owns most of the land adjacent to the border and most of it is already walled.

“Inaction by President Biden has led to the worst border crisis in over 20 years,” Ducey, a Republican, said in a statement. “With this investment, we are giving our law enforcement professionals another critical resource they need to do their jobs. We are standing for the rule of law and cementing Arizona’s commitment to securing our state and our nation.”

DHS Secretary Mayorkas was interviewed on Sunday’s Face the Nation and insisted that his agency is doing a great job on the border. Even after the tragic story of 53 deaths in a tractor-trailer driven by a smuggler, Mayorkas says the border is secure and that potential migrants are being told not to make the trip to the border. Who does he think he’s fooling with such malarkey? The Biden border crisis has produced a humanitarian crisis that is deadly and only getting worse now in the summer heat.

“We have said repeatedly and we continue to warn people not to take the dangerous journey,” Mayorkas said in an interview with “Face the Nation.” “We saw so tragically in San Antonio, Texas, one of the possible tragic results of that dangerous journey and so many people don’t even make it that far in the hands of exploitative smugglers. And we continue to enforce immigration law, as is our legal responsibility.”

The secretary said migrants traveling through central America to the U.S.-Mexico border often receive false information from smugglers that encourages them to attempt the journey.

“They put their lives, their life savings, in the hands of these exploitative organizations, these criminal organizations that do not care for their lives and only seek to make a profit,” he said.

The number of apprehensions at the border continues to increase. Arizona, like Texas, finds itself on the hook for doing what it can to secure its border and handle the flood of illegal migrants into the state. The state legislature is allocating funds to put the governor’s plan into action.

U.S. authorities have “encountered” 385,631 unauthorized migrants in Arizona since October 1. The Tucson Sector, which includes Eastern Arizona, has seen 44.4 percent more migrants than the previous year. In comparison, the Yuma Sector which comprises the western portion of the state reports a 345 percent increase in apprehensions.

“The number of migrant encounters has skyrocketed at our border, overwhelming law enforcement and Border Patrol,” said U.S. Rep. John Kavanaugh, R-Arizona. “We need more support and physical barriers. This is a reasonable investment in Arizona’s safety and security.”

Ducey’s plan is detailed to address many problems brought on my illegal migration.

The legislation includes more than $125 million to support local law enforcement in dealing with the collateral effects of illegal immigration. Sheriff’s deputies will be getting $53.4 million in salary compensation; local counties get $30 million to prosecute human smugglers; Cochise County will receive a $20 million state match for a new jail; local officers working with U.S. Immigration and Customs Enforcement (ICE) get $15 million; and various departments can apply for $10 million in funds to reduce trafficking.

The package contemplates more than $55 million for operations. That includes $30 million for a new State Emergency Operations Center; $15 million for a state police Southern Border Coordinated Response Center; $10 million for National Guard troop deployment as needed; and $800,000 for the Department of Emergency and Military Affairs chain of command.

Another $25 million are to be spent on the migrants. A $15 million fund is created for the transportation of asylum-seekers and $10 million in state cash is earmarked for emergency health care and testing of migrants.

“This investment is critical to saving lives on the border and within our communities,” said Tim Roemer, director of the Arizona Department of Homeland Security. “Not only is this a border crisis, it’s a humanitarian crisis and it’s getting worse. More migrants are making the dangerous journey, fentanyl deaths are spiking […] This funding will go toward critical resources and tools to help us combat dangerous transnational organizations and protect victims.”

The point is that immigration and border security is a federal responsibility. It is the responsibility of Mayorkas and Biden to put resources and manpower into securing the southern border, whether it is in Texas or Arizona, and that is simply not being done. Efforts are not great enough. Biden is turning a blind eye to the humanitarian crisis he has created because this flood of illegal migrants is intentional. Progressives want open borders and see future Democrat voters on the horizon. Just wait until Biden starts making deals for blanket amnesty. Perhaps then news networks other than Fox News will cover the Biden border crisis with the seriousness the story deserves. Until then, governors will continue to try to find funds to deal with the problems their states are experiencing.

TAKING ACTION: Today we signed the most meaningful border security legislation in Arizona history – a plan to make record investments in protecting the state from the unprecedented crisis confronting our communities and law enforcement. 1/ pic.twitter.com/zHQk3NdlKA