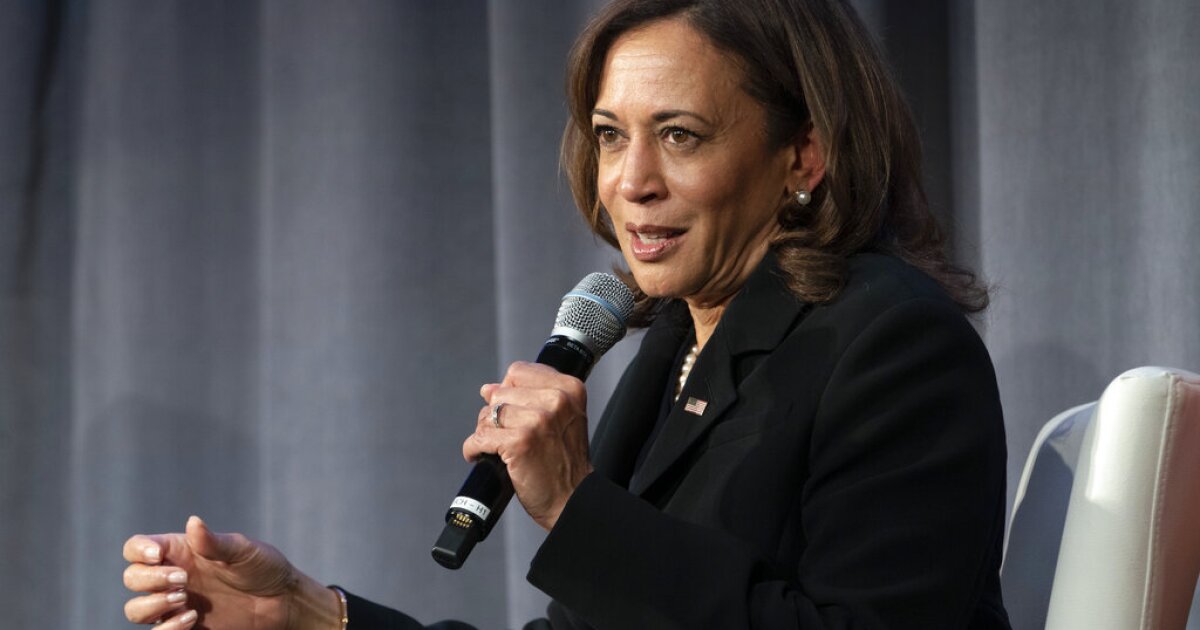 At a Michigan Democratic Party fundraiser Saturday, Vice President Kamala Harris delivered a version of a speech she has made again and again in recent weeks as she crisscrosses the country to rally Democrats to the ballot box in November.

“We got a lot to get done in the next 24 days,” Harris said to supporters gathered at Focus: HOPE, a Detroit job training facility. “Twenty-four days. Twenty-four days. And we are going to, again, ask our neighbors and our friends. … We’re going to ask them to vote.”

“Because there is still so much on the line. Think about where we are right now,” Harris continued, charging that the Supreme Court “took a constitutional right” away from women when it voted to overturn Roe v. Wade.

In remarks two days later at a Democratic National Committee fundraiser in Los Angeles, Harris promised the crowd at the Studio City residence of a top party official that if voters elect two more senators, President Joe Biden “will not let the filibuster get in the way of signing into law the Women’s Health Protection Act.”

“We’ve delivered on so many issues that have been long-standing issues in our country,” Harris said, ticking through the Biden administration’s infrastructure spending, its student debt relief program, and more. “We have a lot of material” to sell voters on “based on what the people demanded,” the vice president said.

Harris had delivered a similar refrain not long before when she told Democrats gathered at the New Jersey home of investor Deepak Raj that “to allow the president to put into law the protections that Roe v. Wade provided … we need to hold on to the Senate, and we need two more Senate seats.”

In a pitch to young Democrats at South Carolina State University’s fall convocation last month, Harris urged attendees of the historically black university to register their vote in time for the election. “Your vote is your voice, and we need your voice,” Harris said.

And while Harris has also raised voting rights, infrastructure, and other issues, the central focus of her message has often been abortion.

The vice president’s message may prove key to rousing segments of the Democratic coalition that could help decide the party’s fate in the midterm elections.

New polling indicates that Democrats have fallen behind in the generic ballot in recent weeks with a surge in the share of voters concerned about the economy. In a warning for the White House, independent voters now favor Republicans by 10 percentage points, compared to a 3-point lead for Democrats in September, according to the New York Times-Siena College poll. The shift is especially acute among women identifying as independents, who backed Democrats by 14 points last month. Now, they back Republicans by 18 points.

By promising to pass abortion rights legislation, the White House hopes to raise the stakes for Democratic voters.

Historian Joel Goldstein said Harris’s effort to rouse “reachable” voters is typical before the midterm elections as political parties hope to ensure base voters turn out in large numbers.

“Like all modern vice presidents, Vice President Harris is playing an active role in the midterm campaigns by discussing issues and administration successes likely to resonate with reachable voters, appearing with candidates, and raising money for co-partisans and the party,” said Goldstein, a professor emeritus at Saint Louis University School of Law.

Harris’s focus on black, female, and younger voters ahead of the midterm elections is key to this effort, a Harris aide told CNN. “The positioning is not so much about the geography but about the demography,” the person said.

Abortion has animated important Democratic constituencies since the Supreme Court returned the decision to the states in the Dobbs v. Jackson Women’s Health Organization case this summer. In response, Biden issued new executive orders that promised to protect access to reproductive healthcare services.

The president went further Tuesday, promising that if Democrats retain their majorities, the first bill he would send to Congress next year will codify Roe. He urged Democrats to reflect on how they felt when the 50-year law was overturned before predicting a revolt from women at the ballot box.

And Harris will again raise the issue of abortion rights at events in Minnesota later this week before appearing at a fundraiser with Democratic Gov. Tim Walz, who is leading his Republican challenger, Scott Jensen, by several points.

Whether the White House’s push on abortion is enough to help Democrats stave off a collapse in three weeks isn’t clear.

In August, voters in Republican-leaning Kansas rejected a ballot amendment removing the right to abortion from the state constitution. The result, weeks after the court’s decision was announced, appeared to show Democrats more enthusiastic about turning out.

Democrats now face significant headwinds as they work to boost turnout. The share of likely voters whose top concerns were the economy and inflation has grown by nearly double digits since July, to 44% from 36%, far above any other issue, according to the Sienna College poll.

Meanwhile, just 5% of likely voters said abortion was their top issue, a fraction of the share that pointed to the economy.