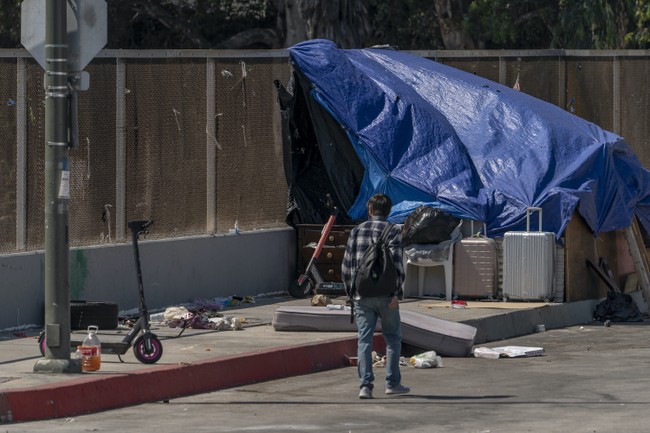 Most people probably think of homelessness as being a blue big city problem, but that’s not entirely true. Sure, blue cities all have major issues with homelessness, and those issues, for reasons we’ll delve into here, are generally worse than large red cities that also deal with it. But small towns – even conservative ones – have their battles to wage against this scourge, especially if they deploy the wrong strategy.

Consider my city of Bristol, Tennessee/Virginia. Two cities, two governments, right next to each other divided by a state line that runs directly down the main street. Though there is a fairly obnoxious leftist minority, residents here are mostly conservative and mostly middle-class. Except during early Covid, when Democratic Virginia state mandates created a weird time when half of the main street was essentially shuttered while the other half prospered, the casual nonresident observer wouldn’t know one half from the other without asking.

Of late, however, another kind of differentiator has arisen between the two cities, sparked by Tennessee’s fantastic recently passed law making camping on public property a felony. It’s a step in the right direction, but it also has caused the homeless problem faced by Bristol to gravitate towards the Virginia side.

“We’ve heard numerous people at the evening meal say, ‘I’m going to get this meal and then I’m going to go over to Virginia, so I don’t have to worry about getting thrown in jail and have a felony on my record,’” local shelter and food kitchen director Brian Plank told WJHL. It’s not rocket science. Remove incentives and create disincentives for homeless people, and they will go elsewhere. In this case, the other side of town.

So, its leadership not being entirely devoid of any logic or compassion for its businesses and citizens, it wasn’t long before Bristol, Virginia passed its camping ban, which went into effect last month. Their version is only a misdemeanor offense, but it’s better than nothing.

Speaking in favor of the law, Beth Rhinehart, president and CEO of the Bristol Chamber of Commerce, told WJHL: “We have business owners who have never called about this type of issue before saying they have travel consultants coming in, who have been coming here for years, who now have said I have some concerns about leaving my hotel and walking to a restaurant … We have business owners who have had a lot of challenges, to be frank, with homeless people. Sleeping in their doorways or using the streets and doorways and alleyways as public restrooms. Folks who have been aggressive with visitors here.”

Despite the recent camping ban, the problem persists. In an article by the Bristol Herald Courier last week, Bristol Virginia City Manager Randy Eads estimated that there could be between 300 and 400 homeless people in Bristol, a figure that includes over 100 who live in a large encampment in Washington County near Bristol Virginia’s Sugar Hollow Park.

Calling homelessness a “crisis” that requires tough decisions, Eades described spending several evenings speaking with around 100 homeless people to find out why they are here and what could be done to help them. What he found out was telling. One woman admitted to chronic drug addiction and told Eades frankly, “There’s nothing you can do to help me.” Four men told him they wanted jobs, but none bothered to turn in applications they were given for open jobs with the City of Bristol. Eades compared the homeless situation in our small town to that of Portland, Oregon, which has seen its homeless population – according to the Bristol Herald Courier – “skyrocket while the city continues to throw millions of dollars at the problem.” Go figure.

Eades described a “crossroads” where the community needs to decide whether it wants to throw more money at the problem or withdraw food, shelter, and other forms of assistance. “Those are the questions we have to ask,” he told BHC. “How do we do it so we aren’t creating a bigger problem? How do we do it so we get a handle on our current problem and make sure we’re helping people who want to be helped? At the end of the day, the people who do not want to be helped do not need to be in our community. That’s a harsh thing to say but, if you’re not willing to help yourself, we cannot be willing to help you.” Bingo.

Still, there is talk of building actual infrastructure to ‘help’ the homeless in our area. In an op-ed about Eades’ statements published in the paper a few days later, Roger Watson called for “initiatives and programs to alleviate the problem,” including turning an empty jail in the middle of town into a homeless shelter, after citing Matthew 25’s admonition to feed the hungry and so on. “There is nothing in those familiar verses about feeding people only if they are qualified for food stamps, sheltering them only if they are natives of the area, or clothing them only if they express interest in getting a job and have no felony convictions,” Watson writes.

Watson and others like him, of course, conveniently leave out the Apostle Paul’s words in 2 Thessalonians 3:10: “If anyone is not willing to work, let him not eat.” In truth, the argument to perpetually feed and care for people who have no desire to help themselves is unsustainable, absurd, and the opposite of real compassion.

Create incentives for homeless people to come, and like bees to honey or raccoons to unsecured restaurant trash cans, they will come in droves. Remove incentives and punish lawlessness, and they will either begin the process of straightening their lives out or they will find greener pastures. There are real solutions that would work if leaders had the guts and political will to implement them. If the problem gets bad enough in enough small towns, perhaps politics will be forced on them.