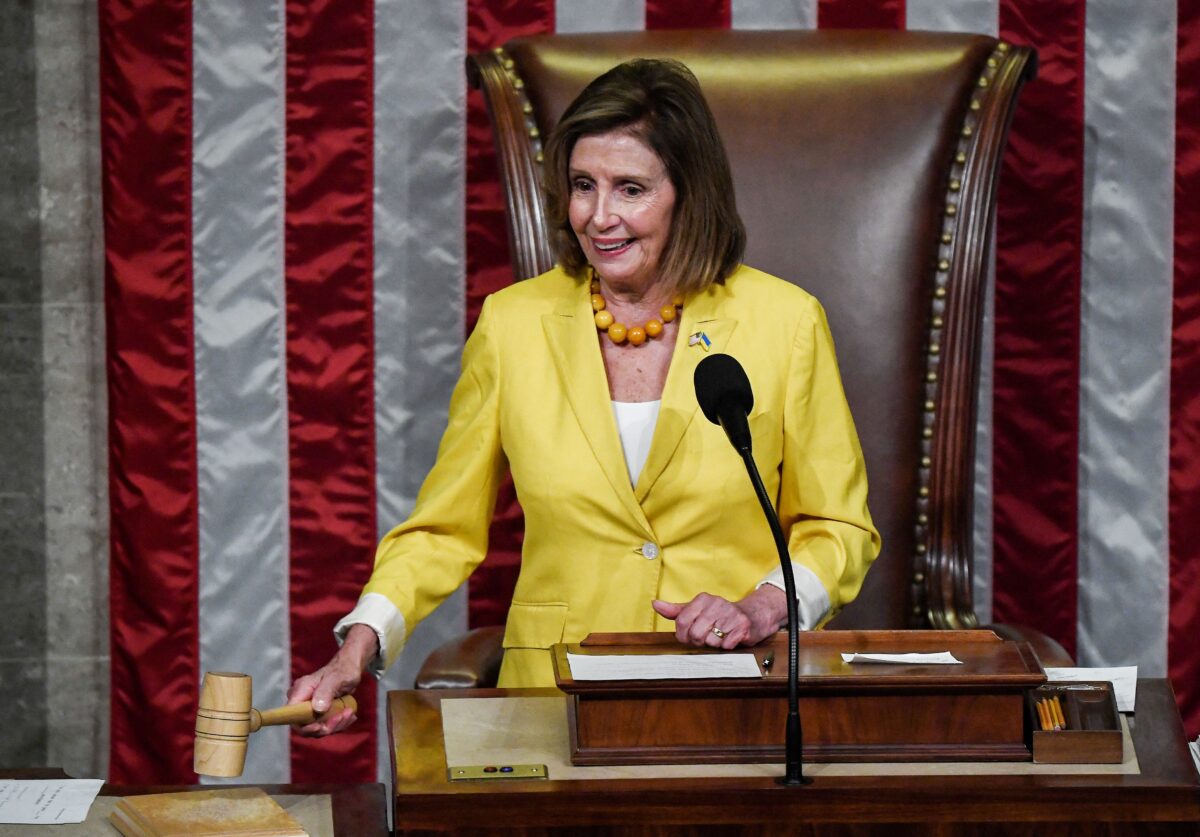 The 220-207 vote came as little surprise, as Democrats have been outspoken in their support for the package while Republicans have come out strongly against the legislation. Four Republicans did not vote.

The bill was passed by the Senate on Aug. 7 using the reconciliation process, which rendered it immune to the filibuster.

On July 27, Sen. Joe Manchin (D-W.Va.) announced that he had reached a deal with Senate Majority Leader Chuck Schumer (D-N.Y.) to pledge his support for the $700 billion spending bill, which Democrats claim will bring in $725 billion in new revenue to the federal government and reduce the deficit by around $292 billion annually.

The Inflation Reduction Act was the product of a year of harried negotiations, compromises, and disappointments for Democrats as they tried to pass the much larger $1.75 trillion Build Back Better (BBB) Act.

Speaker of the House Nancy Pelosi (D-Calif.) barreled ahead with the vote even though the Congressional Budget Office (CBO) had not given its final scores yet, meaning that the actual effect the bill will have on federal revenues, spending, the deficit, and national debt are largely unknown.

Republicans and Democrats alike have pointed to hundreds of economists who either support the bill or oppose it.

There is no consensus among the experts, and without CBO numbers, analysts can do little more than make an educated guess about the effects it will have.

Prior to the vote, Republicans and Democrats debated the bill for about three hours on the House floor.

Democrats portrayed the bill as a timely one which will help reduce inflation and lower costs for American families. Republicans, on the other hand, contended that the bill would only worsen the situation, and blasted Democrats for moving the partisan bill through Congress without proper bipartisan consideration.

“For too long, too many people in this country have felt like the work that happens in Washington isn’t meant to help them,” Rules Committee Chairman Jim McGovern (D-Mass.), who led Democrats’ caucus during the floor debate, said in his party’s opening remarks. “And for a long time, they’ve been right.”

“At the end of the day, this is not a complicated vote—it comes down to what your values are,” McGovern continued.

“This is a historic bill,” McGovern said, encouraging others to support the legislation.

“The legislation before us today is a big deal for American families and a big deal for our planet,” he said. “The Inflation Reduction Act will lower health care and energy costs for working families. This legislation finally makes the wealthiest corporations start paying their fair share in taxes, and it ensures that rich tax cheats start paying what they owe.”

Yarmuth said that the bill was fiscally responsible, fully paid-for, and had been endorsed by top U.S. economists.

“Not one American family making less than $400,000 per year will see their federal tax bill increased by this legislation—not by a penny,” Yarmuth insisted. However, some critics of the legislation have described this oft-repeated claim as misleading, saying that it ignores the trickle-down effects that raising corporate taxes will have on consumer prices and wages.

In his opening remarks for Republicans, Rep. Michael Burgess (R-Texas) blasted Democrats for the haste with which they’ve moved the bill through Congress, with no Republican input.

He also mocked the title of the bill, saying that “you would need a nanometer [or a] micrometer” to measure the effect that the legislation will have on inflation.

“This is the second time we’ve seen this legislative vehicle. The Democrats tried to push through partisan budget reconciliation—what does that mean? That means there is zero input from the Republican side of the aisle. And why is that important? You have a House and a Senate that are almost evenly-divided!

“It’s 50-50 in the Senate—they relied on the vice president’s vote to get this across the finish line,” Burgess said, adding that Democrats barely have a majority in the House.

“So don’t try to tell people that this has been an exercise that was well thought-out, that has come through the committees of jurisdiction, where people have had input—no! No Republican has had any input into this travesty that we have in front of us today.”

Burgess said the Inflation Reduction Act is a reconfigured Build Back Better Act, and that the Democratic senators cut a deal with themselves

“I stress again,” Burgess emphasized, concluding his remarks. “This bill had no Republican input and it will have a negligible effect on inflation.”

Budget Committee Ranking Member Jason Smith (R-Mo.), who has been outspoken in his opposition to the bill, opened Republicans’ remarks during the floor debate.

“This week we found out inflation remains at a 40-year high, with inflation having risen 13.7 percent since Biden became president,” Smith began. “Real wages have decreased by 4.5 percent. Americans are suffering.

“Are we here debating how to alleviate that suffering? No. We are here to debate what Democrats call the ‘Inflation Reduction Act’—which everyone from the Congressional Budget Office, to 230 different economists, [and even] Sen. Bernie Sanders, have said will not reduce inflation.

Democrats’ claims that the bill will reduce the deficit, Smith noted, point to provisions which will not even begin to go into effect until 2029.

“So lots of spending up front, lots of debt up front—and maybe savings eight years from now.”

What’s In the Bill

Included in the bill’s $700 billion in new spending is an $80 billion appropriation to the Internal Revenue Service—six times the agency’s current budget—as well as an array of new climate policies and tax incentives for individuals and corporations who switch to renewable energy sources and low-emission vehicles.

Broken down, the roughly $80 billion appropriation to the IRS will go toward “necessary expenses for tax enforcement activities … to determine and collect owed taxes, to provide legal and litigation support, to conduct criminal investigations (including investigative technology), to provide digital asset monitoring and compliance activities, to enforce criminal statutes related to violations of internal revenue laws and other financial crimes … and to provide other services.”

In addition, the funds would go to hire tens of thousands of new IRS agents to further aid enforcement of the new tax rules—which likely will mean far more audits across the board.

Unsurprisingly, the effort to expand the IRS is not popular with Republicans, who have generally opposed such efforts in the past.

“Democrats are scheming to double the size of the IRS by hiring an army of 87,000 new agents to spy on Americans,” wrote House Minority Leader Kevin McCarthy (R-Calif.) in an Aug. 4 tweet.

The bill also includes a series of new taxes.

The most substantial of these is a 15 percent minimum tax on corporations that make more than $1 billion per year. Though the law currently sets the tax rate for U.S. corporations at 21 percent, many megacorporations end up paying a substantially lower rate after exemptions, write-offs, and tax code workarounds are taken into account.

The effect that this new tax requirement will have on consumer prices and workers’ wages is disputed. But Preston Brashers, a senior tax policy analyst at The Heritage Foundation, predicted in an interview with The Epoch Times that the new tax would cause prices to surge and wage growth to slow or stagnate.

In a compromise with Sen. Kyrsten Sinema (D-Ariz.) to win her support, Democrats also added a 1 percent excise tax on corporate stock buybacks, a practice commonly used by retirement account managers to increase the value of clients’ retirement portfolios.

In addition the bill would, for the first time ever, allow Medicare Part D to negotiate with prescription drug manufacturers, who will have no choice under the legislation but to enter negotiations or face a massive 95 percent excise tax as punishment.

While private insurers have long had the ability to haggle with drug manufacturers, such negotiations have been voluntary for both parties. But under the Inflation Reduction Act, drug manufacturers would not be permitted to refuse negotiations upon receiving an offer from the secretary of the U.S. Department of Health and Human Services.

These mandated price controls, the CBO has warned in the past, could greatly reduce medical innovation in the United States—meaning the number of new, life-saving drugs coming to market every year could shrink by as much as 50 percent.

In the worst case, the CBO warned in a 2019 letter to Democrats discussing the same policy included in the Inflation Reduction Act, pharmaceutical companies may simply pull out of the U.S. market entirely rather than accept price controls or the excise tax (pdf).

What’s Next for the Bill

Because the bill has already been passed by the Senate, it will not need to go back to the upper chamber. Instead, it will now go directly to Biden’s desk for approval, which he has vowed to give.

In the past, Sens. Kyrsten Sinema and Manchin, the two swing-voting members of the Democrats in the upper chamber, have been the largest threat to the passage of any overly ambitious reconciliation bill from their party. As soon as the agreement was unveiled by Manchin and Schumer, Manchin vowed his support for the legislation, leaving a question mark only on Sinema.

Despite some hopes among critics that Sinema would hold out against the bill, denying it of the 50 votes needed to activate Harris’ tie-breaking vote, her office announced late in the evening on Aug. 4 that Sinema had decided to back the bill.

The original draft of the bill would have closed the “carried interest loophole,” a tax code workaround that allows money managers to pay a lower tax rate than normal on profitable investments. This proposal, which was part of the original BBB plan, would have brought in another $14 billion in revenue, Democrats said.

As part of committing her support for the bill, Sinema demanded that this provision be removed, despite Manchin’s expressed demands that the provision remain in the bill. Democratic negotiators acceded to Sinema’s request, instead adding the one percent excise on corporate stock buybacks and paving a way forward for the bill.

With the House’s passage of the bill, it is all but guaranteed to become law in the coming weeks.