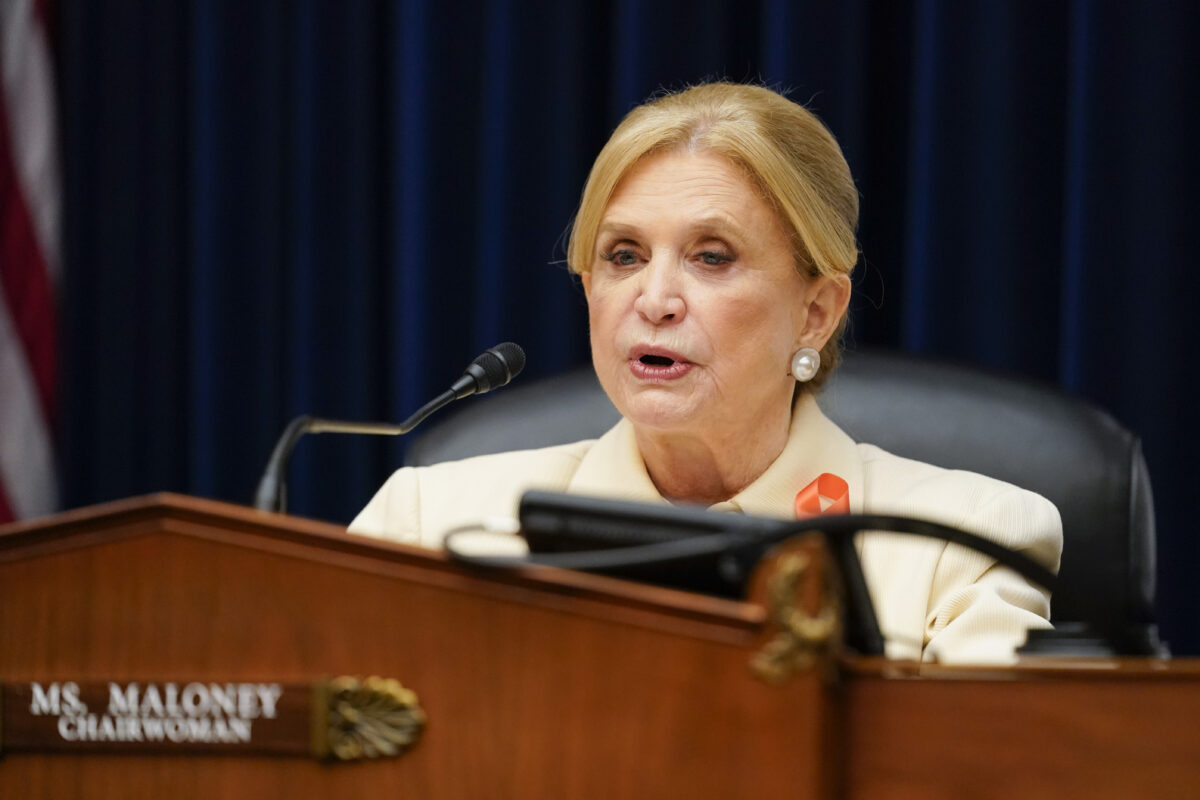 During a July 27 hearing, Democrats on the House Oversight Committee pushed top U.S. gun manufacturers to end the sale of so-called “assault weapons” in the wake of a spurt of gun violence across the nation.

The hearing—coming in the wake of two deadly shootings in Uvalde, Texas, and Buffalo, New York—featured testimony from chief executives at two gun manufacturing firms.

Committee Chairwoman Carolyn Maloney (D-N.Y.) set the tone for Democrats at the hearing in her opening statement.

“The gun industry has flooded our neighborhoods, our schools, even our churches and synagogues, and gotten rich doing it,” Maloney said.

During the hearing, Democrats pressed Christopher Killoy, president and CEO of Sturm, Ruger & Co., and Marty Daniel, CEO of Daniel Defense, to commit to ending the sale of so-called “assault weapons,” a term with a much-debated meaning that critics have described as an undefined catchall term.

Killoy and Daniel, for their parts, defended the industry, shrugging off Democrats’ accusations that they were responsible for the tragedies in Uvalde and Buffalo.

“A firearm, any firearm, can be used for good or evil,” Killoy said. “The difference is in the intent of the individual possessing it.”

Killoy added that blaming an “inanimate object” like a firearm for actions committed by a person is a thinly veiled attempt to deprive law-abiding American citizens of their Second Amendment rights.

“We firmly believe that it is wrong to deprive citizens of their constitutional right to purchase a lawful firearm they desire because of the criminal acts of wicked people,” Killoy said. “A firearm, any firearm, can be used for good or for evil. The difference is in the intent of the individual possessing it, which we respectfully submit should be the focus of any investigation into the root causes of criminal violence involving firearms.”

“These acts are committed by murderers,” said Daniel. “The murderers are responsible.”

Countering these claims, Democrats said, were a series of advertisements showing the use of military-style firearms in military or combat-like situations, including one advertisement that appeared to show a sniper taking aim at a vehicle in a crowded city street.

Committee Republicans, on the other hand, blasted Democrats for blaming firearms for the spurt of gun violence, saying that the focus should instead be on Democrats’ “soft-on-crime” policies that have seen a rapid uptick in violent crime across the board over the past few years.

“It’s absolutely disgusting to me and unthinkable, the height of irresponsibility and lack of accountability,” said Rep. Jody Hice (R-Ga.) “My colleagues seem to forget that the American people have a right to own guns.”

Another Republican, Rep. Clay Higgins (R-La.), got into a heated exchange with Rep. Gerry Connolly (D-Va.) at one point in the hearing, saying that depriving citizens of the right to a firearm would cause law-abiding citizens to be unprepared to defend themselves from criminals, who don’t follow gun laws.

“My colleagues in the Democratic party, when those gun fights happen, that blood will be on your hands,” Higgins said.

Connolly replied that “[Democrats] will not be threatened with violence and bloodshed because we want reasonable gun control.”

The hearing comes as Democrats in the House and Senate seek to advance much stricter gun control laws.

At the end of June, a compromise gun bill brokered in the Senate between Sens. John Cornyn (R-Texas) and Chris Murphy (D-Conn.) won enough support to overcome the 60-vote filibuster threshold, and has since passed the House and been signed into law by President Joe Biden.

Though the bill was a victory for gun control proponents and a stinging defeat to Second Amendment advocates, Democrats have little chance of being able to replicate the feat with more wide-reaching gun control legislation.

Still, Speaker of the House Nancy Pelosi (D-Calif.) has said that Democrats will in coming weeks consider another gun control bill to ban the sale of “assault weapons,” but that bill has even won some critics among Democrats. In the thinly-held lower chamber, where Democrats have only a four-seat majority, Pelosi can scarcely afford to lose a single vote if Republicans are united against the bill, and the fate of the assault weapons ban remains largely undetermined.

Even if the House were to pass that bill, it is all but guaranteed to fail in the Senate, where it will likely fail to gain the support of at least 10 Republicans to overcome the filibuster threshold.