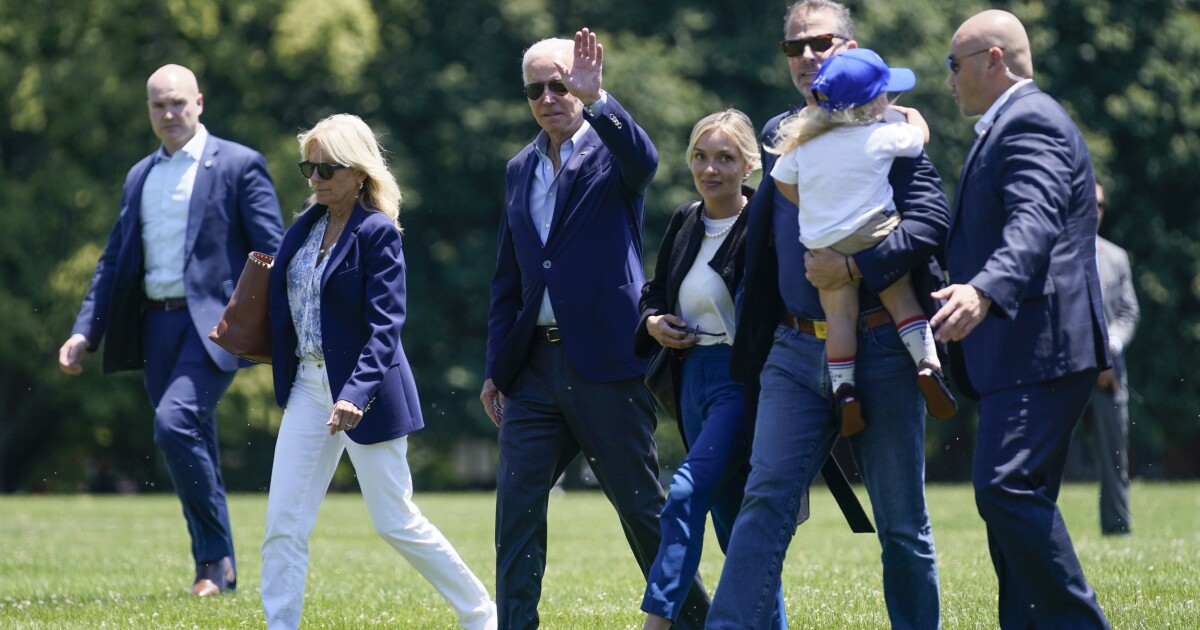 A top House Republican investigator says the Treasury Department is restricting access to suspicious activity reports on Hunter Biden and is investigating whether that is being done to protect President Joe Biden and his troubled son.

Rep. James Comer (R-KY), the ranking member on the House Oversight and Reform Committee, sent a letter to Treasury Secretary Janet Yellen on Wednesday, following up on a May letter.

“I wrote to you requesting information regarding Hunter Biden and other Biden associates and family members’ financial transactions flagged by U.S. banks for reporting to the Financial Crimes Enforcement Network (FinCEN) through Suspicious Activity Reports (SARs). The Biden Administration is restricting Congress’ access to SARs, and Committee Republicans are investigating whether this change in longstanding policy is motivated by efforts to shield Hunter Biden and potentially President Biden from scrutiny,” Comer wrote.

Comer said that “despite Treasury’s assertion in the press … Treasury is refusing to release SARs connected with Hunter Biden or his family and associates — including the President.”

The Treasury Department claimed in May that it “provides SARs to Congress in a manner that enables robust oversight and that is consistent with how other sensitive law enforcement information is produced” and that it “has made SARs available for every request we’ve received, regardless of party, and will continue to do so.”

Comer added: “Treasury’s actions call for investigation and raise new questions about the degree to which the Biden Administration is using the federal government to provide cover for the Biden family and its associates. The American people deserve to know whether the President’s connections to his son’s business deals occurred at the expense of the United States’ interests and whether they represent a national security threat.”

The Republican asked Yellen to hand over “all SARs generated in connection with” Hunter Biden, with his uncle James Biden, with Hunter’s various business partners such as Eric Schwerin and Devon Archer, and with his businesses, including Rosemont Seneca. Comer also asked Treasury to provide “all documents and communications” between the Treasury Department and the White House regarding Hunter and James Biden and their businesses and associates, as well as any FinCEN records tied to any banks related to Hunter, James, and others.

In a statement given to the Washington Examiner on Wednesday, a Treasury official said: “Treasury provides SARs to Congress in a manner that enables robust oversight and that is consistent with how other sensitive law enforcement information is often produced. It is not a political process. Since the beginning of this Administration, Treasury has made SARs available in response to authorized committee requests and continues to engage on the process with any individual members seeking information.”

It comes after a Washington Examiner investigation found Hunter Biden disclosed in text messages to a woman named Eva, the go-between who served as his primary point of contact for UberGFE, that his accounts were temporarily frozen at one point because his attempted payments to her “girls” with Russian email accounts were too much of a “red flag” for his bank.

Hunter Biden spent over $30,000 on Russian escorts linked to Eva and UberGFE between Nov. 26, 2018, and March 10, 2019. Eva directed him to make payments to bank accounts linked to Russian email addresses at least 11 times during that time frame.

A 2020 Senate report by Sens. Chuck Grassley (R-IA) and Ron Johnson (R-WI) said: “Hunter Biden paid nonresident women who were nationals of Russia or other Eastern European countries,” and records note some of these transactions are linked to what “appears to be an Eastern European prostitution or human trafficking ring.”

The report said Hunter Biden “sent thousands of dollars” to people either involved in “transactions consistent with possible human trafficking” or “potential association with prostitution.” Some of the women “subsequently wired funds they have received from Hunter Biden to individuals located in Russia and Ukraine.”

“The sheer number of flagged transactions in this case is highly unusual, and may be indicative of serious criminal activity or a national security threat,” Comer told Yellen in May. “We are particularly concerned where those transactions may involve business with firms or entities, including those with direct ties to foreign governments, hostile to the United States’ interests.

“Hunter Biden routinely sought business deals with foreign entities that would have a high likelihood of triggering the filing of SARs. Given Hunter Biden’s apparent ability to continue his international business dealings notwithstanding numerous SARs filed in relation to his business transactions, we must determine the full extent to which SARs were generated by various financial institutions in these cases, and if so, whether suspicious activities or any other SARs were ignored by law enforcement and bank regulators.”