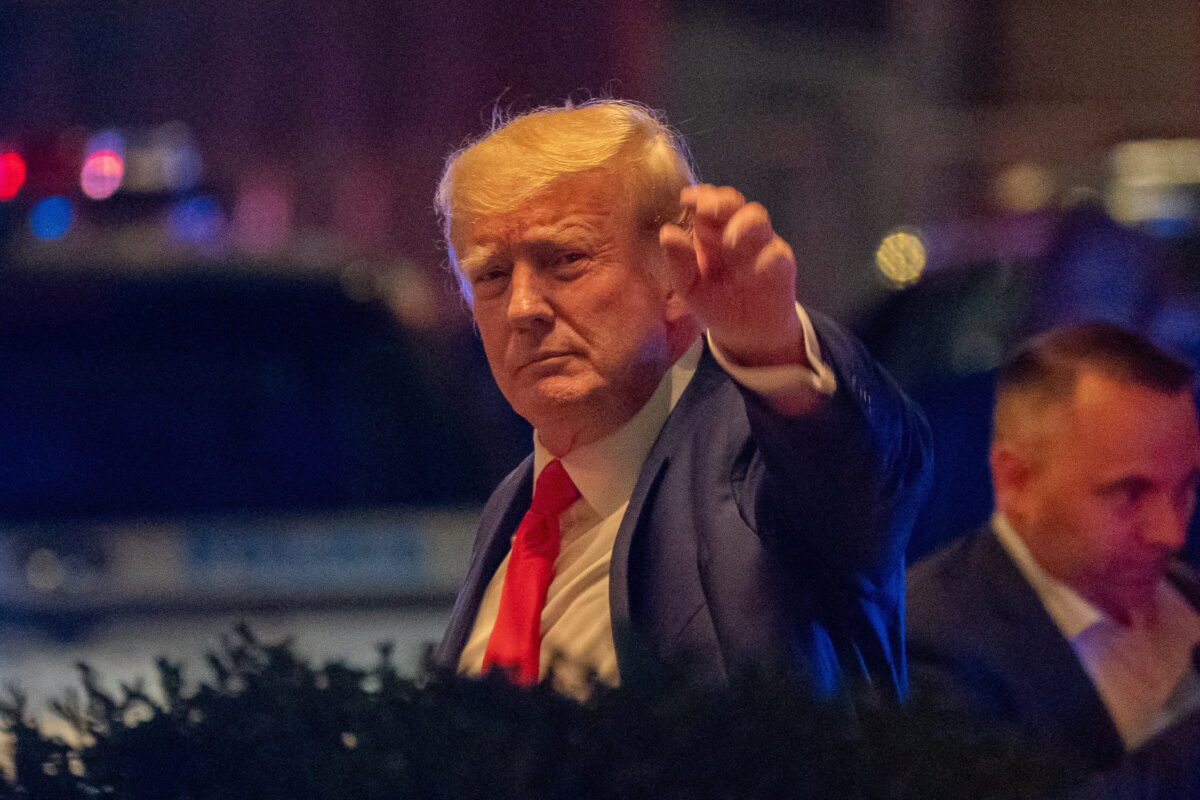 Former President Donald Trump was “very upbeat” in the wake of the FBI raid on his home, according to Republican lawmakers who met with him on Aug. 9.

About a dozen members of the Republican Study Committee, led by chairman Jim Banks (R-Ind.), met with Trump over dinner at his golf club in Bedminster, New Jersey, a day after the FBI raid on his Mar-a-Lago resort, which Trump and allies have characterized as an attempt from the left to keep the former president from taking the office again.

The raid was an inevitable topic during the roughly three hours they spent together, but it wasn’t a major focus, the lawmakers said. During the meeting, which was scheduled ahead of the raid, the former president appeared to be in a great mood. He made jokes and signed autographs on his trademark red hats. He talked to all the Republican members in the room and interacted with some of their staff members.

He and others saw the FBI’s move as part of a continued campaign to attack and discredit the former president, who, he said, was “not moved by it.”

“Yes, the left is after him. But he’s been dealing with these whack jobs for five years now. So this is nothing new to him. Donald Trump knows what he’s done. And Donald Trump hasn’t done anything wrong,” he said.

“He’s Teflon, everything bounces off of it,” he said. “Why? Because he’s an honorable man that loves this country.”

The conversation was casual and relaxed with “fantastic food,” according to Rep. Claudia Tenney (R-N.Y.), who at one point shared with Trump some photos of “cute kids that are big Trump supporters” in her district.

While Trump “expressed his disregard for [Attorney General] Merrick Garland and the FBI,” he was upset that the agents went through Melania Trump’s wardrobe, said Tenney. The consensus in the room, she said, was that “it was an abuse of power.”

“They tried twice to impeach him when he was in office, they had the January 6 show trial that never ends … they will convene another meeting with a predetermined outcome, just like a Soviet-style event,” she told The Epoch Times. “And now, this is another attempt.”

Trump’s second son Eric Trump, who said he had first alerted his father, who was in New York, to the raid, on Aug. 9 said the FBI agents had breached a personal safe that was empty. The agents wouldn’t allow Trump’s representatives to oversee the 10-hour search and took boxes of documents from the Trump home, his lawyer Christina Bobb earlier told The Epoch Times. She noted that the agents were given access to a storage facility in the resort in June but didn’t leave with anything at the time.

The FBI raid is reportedly in connection with a Department of Justice (DOJ) probe into whether Trump took presidential records with him after he left office. But representatives of Trump have maintained that the former president had been cooperating with the National Archives and Records Administration on this matter. The DOJ and FBI have declined to publicly comment on the case.

Trump on Wednesday said the DOJ and FBI had earlier asked his legal team had put an extra lock on the door leading to the place where boxes containing records were stored, to which they agreed.

“Then on Monday, without notification or warning, an army of agents broke into Mar-a-Lago, went to the same storage area, and ripped open the lock that they had asked to be installed. A surprise attack, POLITICS, and all the while our Country is going to HELL!” Trump said on his social media platform Truth Social.

While the White House has denied having foreknowledge of the FBI action, Tenney found it hard to believe.

“Everybody behind the scenes knew exactly what they were doing and this was a calculated event,” she said. “The proof will be in the evidence when it comes out and if we can ever get to the truth.”

“The Democrats thought this would really make Trump look bad,” she said. “I think they’re trying to cook up some kind of scheme, again, to prevent him from running again, should he decide to enter the race.”

Tenney also saw it as a way to distract the public from the “horrific bill that they just passed,” the Inflation Reduction Act, a $700 billion Democrat spending bill that includes $80 billion in funding to the Internal Revenue Service (IRS), which Republicans say would allow the agency to hire an additional 87,000 enforcement agents. The bill passed along party lines in the Senate earlier this week, and is expected to pass the House on Friday, before it is sent to President Joe Biden’s desk for signing.

While the White House has maintained that the IRS wouldn’t increase audits for households making less than $400,000 each year, critics have disagreed. Ultimately, the middle class will be the ones “leveraged into just paying whatever the IRS wants, because they can’t afford a lawyer to fight it,” said Tenney.

With three months left until the midterm elections, Republicans are poised to take back control of the House chamber. The timing of the raid makes it a likely bid for the Democrats to discredit their opponents, suggested Rep. Lisa McClain (R-Mich.).

Part of the dinner table discussions involved “putting America First in November and how the left is using every dirty trick in the book to try and save their fading majority,” she told The Epoch Times. “I was glad to see President Trump doing well and I look forward to working with him to save our country.”

Tenney believes that the “weaponized federal government’s acting, whether it’s the FBI, the Department of Justice, and its two-tier justice system,” will backfire on the Democrats, and rally even those who don’t really like Trump but believe in freedom.

“This is going to make people even more concerned, especially with all these IRS agents, scattering the country looking for people,” she said. “The Democrats made a calculated error, in my opinion.”

Voters appear to be reacting to the raid as well, according to findings released by Convention of States Action, a conservative advocacy group, in the first national poll conducted following the raid.

“Not only has The FBI’s raid of President Trump’s home fueled his spirit and energized his supporters—but for those on the fence, it’s pulled back the curtain on the deep partisan bias which has become entrenched in much of the bureaucracy,” Rep. Michael Cloud (R-Texas) told The Epoch Times.

Trump, during the meeting, gathered viewpoints from around the room on his entering into the 2024 presidential race, and whether he should announce his bid after the midterm elections in November.

Nehls, when it was his turn, urged Trump to “get out there right away” to remove anxiety from his supporters, who know how “ruthless” Trump’s enemies are and are overwhelming him with their concerns.

“My phone and my texts, my emails are blowing up,” the congressman said.

Nehls cited the success of Trump-endorsed candidates in key races as evidence of the former president’s influence among voters. Trump should “make that announcement” and “take away any doubt” from his supporters, Nehls said he told Trump.

“You don’t have to wait. There’s no need to wait. You’re the leader of our party,” he told Trump, Nehls recalled.

“You will put [the Democrats] on Rolaids for the next two years. And it’s going to be great to see,” the congressman also said to Trump, referring to medication used for heartburn.

His confidence in Trump’s 2024 presidency was shared by another Texas Republican Rep. Randy Weber. “I encouraged President Trump to run in 2024, and I hope he does,” he told The Epoch Times.

House Minority Leader Rep. Kevin McCarthy (R-Calif.) has pledged action against what he described as the DOJ’s “weaponized politicization” when Republicans are back in charge of the chamber.

“I’ve seen enough,” he said in a statement late Monday following the raid on Trump’s property, vowing the investigation will “leave no stone unturned.”

“Attorney General Garland: preserve your documents and clear your calendar,” he said.

Multiple lawmakers at the dinner also echoed such calls and highlighted what they observed to be a double standard being applied to Republicans vis-à-vis Democrats.

Weber noted what he described as an absence of outrage over Hillary Clinton’s use of private emails when serving as secretary of state, as well as foreign business dealings involving Hunter Biden, President Joe Biden’s second son.

“We remain focused on November, and President Trump is fired up. When the Republicans are in charge, we will conduct rigorous oversight of the unelected bureaucracy,” he said, naming the FBI, the DOJ, the Biden family’s “suspicious foreign business deals,” the COVID-19 origins, and the record surge of illegal immigrants at the southern border as some of the key priorities after midterms.

“This egregious double standard must be stopped, and the swamp must be drained!”

Nehls, in the interview, shared this indignation.

“Could you imagine if Hunter’s last name was Trump? Just think about what the left and the dishonest media and that the Liberals the far left what they would have been doing to Trump every day, all day long,” said Nehls.

“They would be asking for Donald to resign. They would say your family’s a disgrace … But looking at what the media has done to Hunter, nothing. Zero.”

Biden’s sale of strategic oil reserve oil to foreign adversaries, the debacle at the southern border, and the disastrous Afghanistan withdrawal are “impeachable offenses,” he added.

Trump’s ‘Going to Come Back’

Trump didn’t reveal his plans for 2024 at the meeting.

Whatever decision he makes, Nehls said he would stand behind the former president.

“I will fight to the gates of hell if was for him,” he said. “That man loves this country more than just about anybody I’ve ever met. He put the American people first. His policies and the results of those policies, put America on a trajectory to just having a lot of hope—a bright, bright future for every American, but disenfranchised.“

The congressman said that he couldn’t be more excited to be part of the group.

“Our country is burning on several fronts. If they call it a crisis, I guess we have a crisis everywhere,” he said. “And there’s only one guy that did come in and save this country right now, in my humble opinion, and that’s Donald J. Trump.”

The Epoch Times has reached out to the White House, DOJ, and FBI for comment.