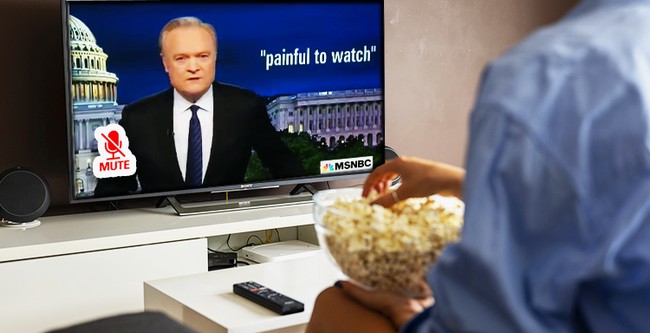 Many a commentator and journalist spoke honestly after the Tuesday Pennsylvania debate to declare it was painful to watch. The desperation in some to prop up John Fetterman reaches a new low, as Lawrence O’Donnell dares to liken Fetterman to FDR and Winston Churchill in an effort to diffuse those using the phrase. Yes, he does just that.

This is insipid to watch.

Larry O’Donnell actually invoked Franklin Roosevelt and Churchill in his effort to defend John Fetterman, a candidate with no accomplishments in his resume. pic.twitter.com/U5BpP6TqZv

Maybe the best way to illustrate the desperation of some to prop up Fetterman is that after O’Donnell compared him to other disabled politicians, the Washington Post came out to state Fetterman’s stumbling and painful-to-watch performance was a milestone for the disabled community.

Here’s an idle question for The Post: Was it not considered a milestone when the actually disabled Greg Abbot won the governorship of Texas?

Whatever voters ultimately decide at the polls, Fetterman’s performance marks something of a milestone for the disability community, which remains underrepresented at every level of elected office. https://t.co/P6VHWtpBju

Adding to the support staff in the press corps, People Magazine came out with an interview with Fetterman, and in that profile, there is no indication at all that there were any of the same problems with John’s mental faculties. Of course, a possible contributing factor to this surprising turnaround in his performance is that People permitted the candidate to deviate from the normal process, as his interview was conducted in a fashion rarely seen on a campaign.

– “‘When we launched we knew it would be close in the end. Pennsylvania is the ultimate swing state,'” John, 53, tells PEOPLE in an interview conducted via email.“

John and Gisele Fetterman Open Up About Stroke, Parenting on Campaign Trail https://t.co/cEKfaRgeeW

On “Morning Joe,” they hosted a lively debate about the elections between host Mehdi Hasan and Shadi Hamid of the Brookings Institute. As Hamid was asking if Hasan would accept a result of a Donald Trump victory in 2024, Hasan hedged his going against his prior charges of contesting elections by declaring that there could be no acceptable result because of all of the election corruption the GOP has already committed.

Hasan stated that blacks were being prevented from voting, which had Shadi Hamid a touch befuddled, and he asked where blacks were being prevented. “Georgia,” was Hasan’s response, as he appeared dismayed that anyone would even dare question the accusation. Lost on Hasan, apparently, is the fact that Georgia has been experiencing record minority voter turnout in the primaries and early voting locations.

This morning the New York Post posted a number of questionable and tasteless postings that were the result of a very obvious hack within their system. The paper came out to declare they pinned the source down to a disgruntled employee and later this same morning announced the employee had been terminated.

In Kathy Hochul’s circle, her press secretary Jen Goodman came out with a sternly-worded comment demanding a response from the Post.

Our response to the NY Post this AM: pic.twitter.com/ALvvON79Je

This is the same Jen Goodman who, during her stint as Terry McAuliffe’s press secretary, was in full-throat PR about the hoax tiki torch racism incident with Glenn Youngkin’s campaign. She posted her outrage demand nearly an hour after the Post already explained what happened.