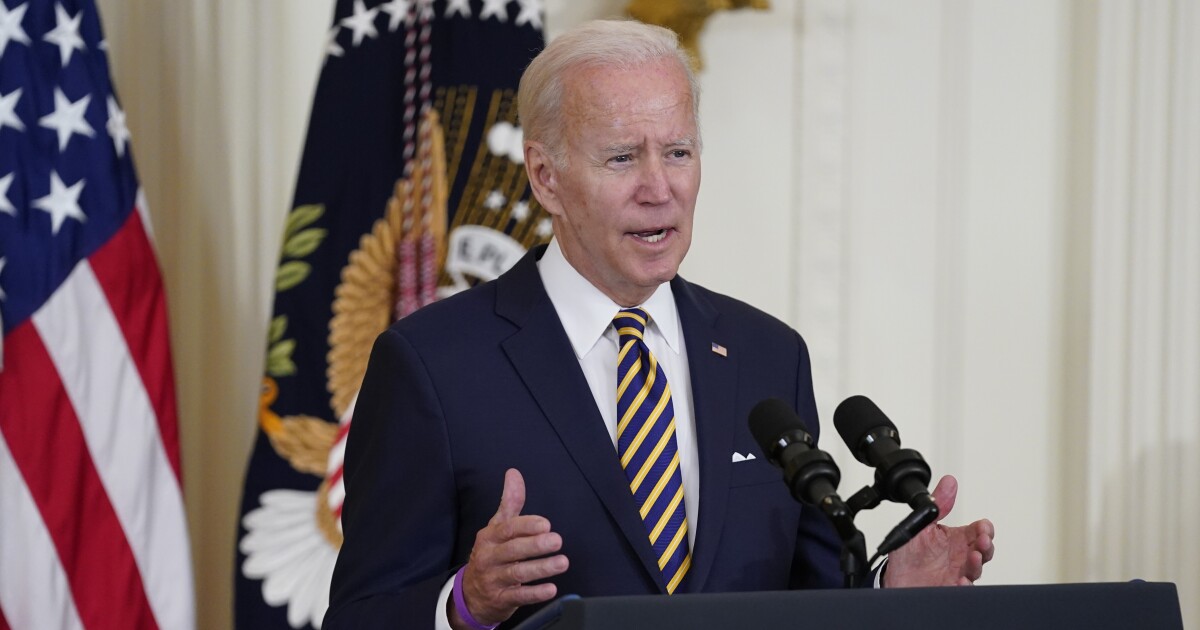 Democrats made a bold move by rebranding the remnants of Build Back Better as the Inflation Reduction Act, and now that President Joe Biden has signed it into law, voters will be expecting results.

Biden took a brief break from his vacation to hold a signing ceremony for the bill at the White House, where he praised the legislation as a major step forward for his agenda and for the country.

“We’re cutting deficits to fight inflation by having the wealthy and big corporations finally begin to pay part of their fair share,” Biden said at the signing ceremony. “Big corporations will now pay a minimum of 15% tax instead of 55 of them getting away with paying zero dollars in federal income tax on $40 billion in profit. And I’m keeping my campaign commitment: No one earning less than $400,000 a year will pay a penny more in federal taxes.”

The bill aims to reduce inflation, currently at 8.5%, mostly through a 15% minimum corporate income tax and via stricter tax collection at a beefed-up IRS. But it goes far beyond that, despite the name, by including allowances for Medicare to negotiate some drug prices, price caps on insulin for Medicare recipients, and the largest climate provision ever undertaken.

Biden stopped over in Washington between vacationing in South Carolina and another leg of vacation in Delaware. He’s been largely staying out of the spotlight amid a modest rise in his poll numbers.

Republicans roundly oppose the bill, which only passed the Senate thanks to a tiebreaking vote from Vice President Kamala Harris, arguing it is misleading and that it violates Biden’s campaign pledge not to raise taxes on people earning less than $400,000 a year.

Though the legislation does not include higher taxes on anyone earning less than that figure, Republicans argue the bill will nonetheless effectively raise the tax burden on middle-class voters. They say the new 15% minimum tax on corporations will result in higher prices, lower wages, and suppressed retirement accounts, while a beefed-up IRS funded by the bill will result in more painful tax audits for regular folks.

“It’s getting harder by the day to make ends meet, and now, Americans are watching in fear as Democrats hike taxes and send an army of IRS agents to shake down families for every penny they have left,” said Congressional Leadership Fund press secretary Cally Perkins. “Democrats torched the economy and continue fanning the flames with their failed policies.”

Much of Biden’s comments and progressive praise for the bill focuses on aspects unrelated to inflation.

“Today, House Democrats stood up to lobbyists, Big Pharma, and Big Oil to vote for cleaner air, more affordable healthcare and prescription drugs, and to stop wealthy tax cheats from gaming the U.S. tax system,” said Center for American Progress CEO Patrick Gaspard after the bill passed. “Not one House Republican was willing to do the same.”

Biden has been on something of a winning streak lately. As of Monday, Biden registered a 40.3% approval rating in the RealClearPolitics polling average, a 3.5-point increase from his term low registered back on July 21. Since that time, the president has secured a series of major legislative victories, ordered the killing of a top terrorist leader, personally kicked coronavirus, and seen gas prices decrease for more than two consecutive months.

Still, his political fate remains closely tied to inflation. The public has voiced negative sentiment about Biden’s economic policy for months, with his handling of inflation registering just 29% support from 665 respondents in the latest poll from Ipsos and ABC. More than two-thirds of respondents said they thought the economy was headed in the wrong direction under the current administration.

Those numbers are unlikely to improve as long as inflation remains at levels not seen since the early days of the Reagan administration.

The IRA received praise from the Committee for a Responsible Federal Budget, a nonpartisan think tank, which estimates the bill will reduce deficits by nearly $2 trillion over two decades. But the group’s analysis says much of the savings will take years to materialize, with prescription drug savings not being felt until 2027.

With the bill unlikely to affect inflation in the near term, Republicans plan to escalate attacks against the 15% corporate minimum tax and an essential doubling in funding for the IRS as violations of Biden’s pledge not to raise taxes on households earning less than $400,000 per year.

To counter those criticisms, Democrats plan to rally around the bill ahead of the midterm elections. Biden will be touring the country touting the IRA and other recent legislation and will hold another celebration of the bill at the White House on Sept. 6.