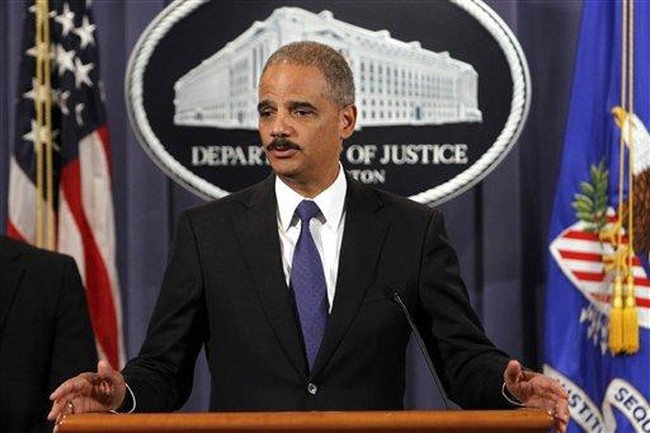 News broke Friday morning that longtime conservative activist and Trump advisor Steve Bannon was sentenced to four months in federal prison after being held in contempt of Congress. His crime? Ignoring a subpoena for testimony in front of the heavily partisan, illegitimate and anti-American January 6 Committee.

I’ve been in this business long enough to remember when Attorney General Eric Holder was voted in criminal and civil contempt of Congress by Republicans and Democrats in the House. I covered it live and remember watching the build-up to the moment on the floor when it finally happened.

Lawmakers took the vote after months of stonewalling and lack of cooperation from Holder on Obama’s Operation Fast and Furious scandal, which resulted in the murder of Border Patrol agent Brian Terry and hundreds of Mexican citizens. It was an operation that involved the Bureau of Alcohol, Tobacco and Firearms, overseen by Holder and the DOJ, that framed American gun shops while handing thousands of rifles to Mexican narco-terrorists.

Despite these facts, Holder never spent a day in prison, not to mention federal court.

There is an ongoing, consistent and systemic double standard corrupting the justice system.

Since May, dozens of pro-life crisis pregnancy centers have been violently targeted by pro-abortion activists. A report released  by Susan B. Anthony Pro-Life America “details more than 40 incidents of violence, vandalism and intimidation directed toward pro-life individuals and organizations, including pregnancy centers and houses of worship, since the leak of a draft opinion in the Dobbs case.” Jane’s Revenge, the Antifa-linked pro-abortion organization, took credit for the violence and vowed to inflict more.

And yet, no arrests have been made, and the Department of Justice seems uninterested in pursuing any leads on who is conducting the attacks.

But the DOJ is making arrests that satisfy its rabid abortion agenda.

Earlier this month, pro-life father of seven Paul Vaughn was arrested at gunpoint in the early morning hours by FBI agents who stormed through his home. His crime? Standing in front of an abortion clinic and allegedly engaging in a “civil rights conspiracy.”

“Vaughn shared his family’s account of the FBI raid with Townhall, providing harrowing details of his arrest just before the father was about to take his children to school. According to a statement provided to Townhall, Vaughn was handcuffed on the porch in front of his kids after FBI agents raided the Vaughn family property while carrying assault rifles and side arms. Three of Vaughn’s children were outside walking through the backyard when an FBI agent armed with an AR-15 confronted the kids and questioned them. Several kids were asleep upstairs, and one child ran to her mother frantically crying,” Townhall’s Mia Cathell reported about the incident. “His wife, shaking and fighting back tears, said she demanded to know what was happening. Still, the FBI agents refused to answer why they were there, did not identify themselves, did not show badges, provided no warrant proof, and did not say where they were taking her husband. Vaughn was placed in an SUV wearing his undershirt and jeans with no identification or means of communication when he got whisked away within a 10-minute timeframe.”

Vaughn didn’t throw bricks, break windows, or firebomb the place. Instead, he suggested women make a different choice about their pregnancy and prayed for their unborn children. Ten others like him, most parents and grandparents, were also charged.

This is the pattern. Whether its social justice rioters and leftist anarchists who destroyed a number of American cities in the summer of 2020, inflicting the most expensive damage in American history, still walking free, or Hunter Biden’s readily available and provable criminal acts being buried on behalf of President Joe Biden.

The United States of America is supposed to have a legal system that provides equal justice under the law. Democrats have issued new rules, and they aren’t going to like playing by them when Republicans regain power in Washington, D.C. In the meantime, law-abiding Americans are tired of the double standard and political games.