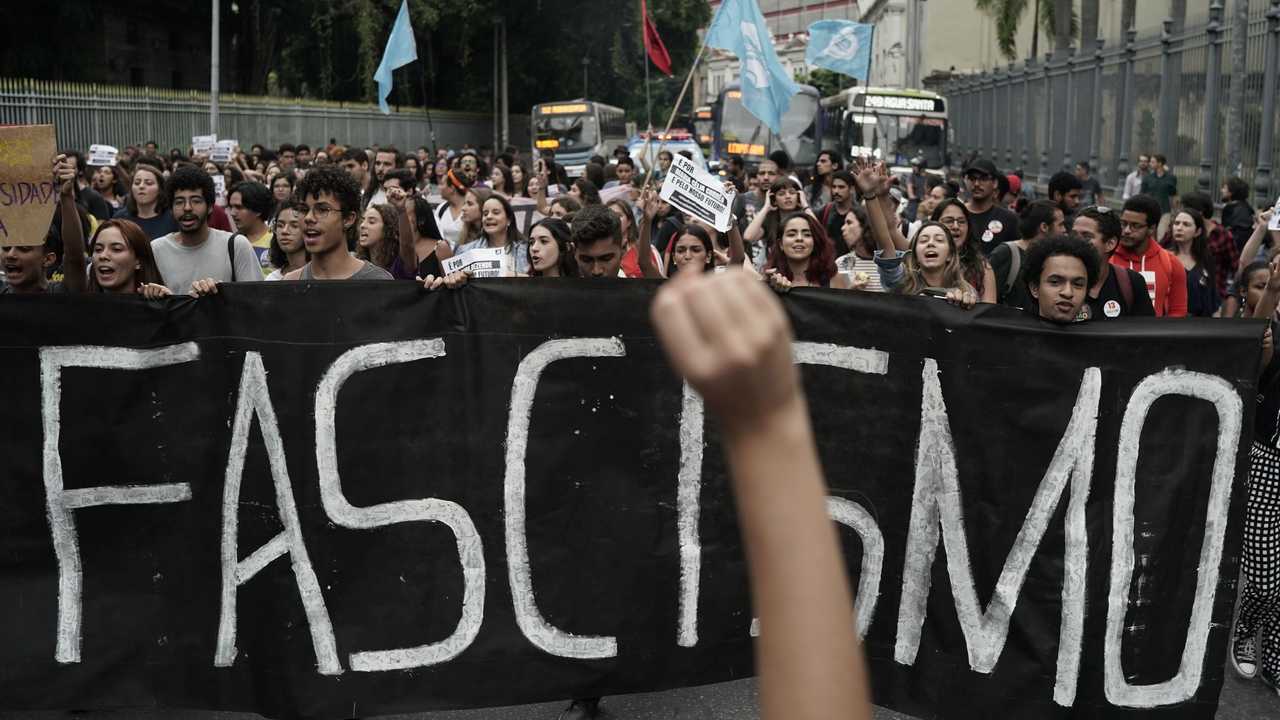 Mehdi Hasan is one of MSNBC’s most popular hosts. For American liberals, he’s a dream come true. Muslim, check. Raised in the United Kingdom, he went to an exclusive prep school in London, founded in 1561, check. He speaks like an English aristocrat, check. He despises America, check. And he has publicly referred to Christians and other non-Muslims as “animals” and “people of no intelligence.” Double check. And he’s always angry.

He did a show this week about how “Fascism is on the Rise in Europe, Not Just in the U.S.” You see, for MSNBC viewers, Europe is the Land of Enlightenment and Progress, except for those vicious right-wing governments in Poland and Hungary. But Hasan had a Yale professor and an Italian Muslim to warn us, you can’t escape fascism in America by moving to Europe, fascism is on the march everywhere these days.

“Fascists” have done well in this week’s elections in Sweden and will be part of a new coalition government. And “Fascists” are poised to do well in upcoming Italian elections. And you only see “fascism” in white-majority countries, like the U.S. or in Europe.

And what is fascism? According to Hasan and his guests, you can see several key elements in the “fascist” Swedish Democrats party and its members. They are against unlimited immigration. Check, fascism. They support traditional family values. They support gay rights, but some members find Gay Pride parades a bit boring, annoying even. Fascism, double check. They respect religious rights, but believe that Muslim immigrants should obey the laws of Sweden and should learn Swedish language, in return for generous social benefits. Fascism, triple check.

And yet, somehow Hasan seems incapable of recognizing simple facts. Now, his audience doesn’t know anything about Islam, the Middle East, Africa, or Europe. But Hasan does, so his ignorance is really just willful blindness.

There are no countries in Africa or the Middle East that welcome immigrants. In South Africa, the only country in Africa wealthy enough to attract immigrants, immigrants from neighboring countries like Zimbabwe are beaten and sometimes murdered. They are certainly not offered social benefit packages and citizenship. In Saudi Arabia, United Arab Emirates, Qatar, Kuwait and Oman, there are millions of immigrants, mostly from India and the Philippines. They have only “guest worker” status, they can never be accorded citizenship, and they have basically no rights in the courts.

Sweden legalized homosexuality in 1944. Gay civil unions were recognized from 1995 onwards, gay marriages since 2009. Sweden is probably the most progressive country in the world where it comes to gay rights, and the Swedish Democrats agree with such progressive policies. But for Mehdi Hasan (who has had to apologize for his own homophobic past public statements comparing homosexuals to pedophiles, dog lovers, and blasphemers), the Swedes are fascists.

But what about Africa? In almost every country, homosexuality is illegal. In many countries, like Nigeria and Somalia, it is punishable by death. And in almost all countries in Africa, gay people are murdered for their sexual orientation. But for Mehdi Hasan and his guests, that’s OK.

And the Middle East? There is one country in the Middle East where homosexuality is not illegal and where gay civil unions are recognized. Yes, Israel of course, another country Hasan deems “fascist.” In Saudi Arabia, Iran, Qatar, Yemen, and other Muslim countries, being convicted of being gay carries a death sentence. But isn’t Islam the religion of peace?

And a query. How many Jews live in Syria, Iraq, Iran? All three had local Jewish populations who had been living there since Biblical times. Now there are zero Jews left in Iraq, maybe a dozen or so elderly pensioners in Syria, and a few hundred grudgingly tolerated in Iran. Out of what was once a Middle Eastern Jewish population numbering in the millions. They were either murdered or forced to immigrate under threat of deadly violence.

And how many Christians remain in the Middle East? Very few outside Lebanon and Israel.

And yet it is the Swedes who are “fascists” because they are insufficiently welcoming of Muslim immigrants and reluctant to bow down before the commands of the Muslim community.

Personally, if I were a Muslim immigrant in Sweden, I’d be a bit more grateful for the apartment and generous financial stipend Sweden provides me. I’d be a bit more respectful of a rich culture and a people who are so tolerant and welcoming to foreigner immigrants. But most Swedish Muslims are not grateful. They hate tolerance, they resent not getting more, and they have nothing but contempt for the people who were born there, and some of whom persist in thinking it’s their country.

So, for Mehdi Hasan, not enthusiastically marching in a Gay Pride parade is “fascism,” if you’re Swedish or American. If you’re a Muslim, stoning gays to death is OK, if you’re African, chopping gays to death with a machete is OK. If you question unlimited social benefits for immigrants, you’re a “fascist” if you’re Swedish or American. If you’re Arabic, you can enslave immigrant guest workers, no problem at all. Haven’t read the Koran and learned to submit? That makes you a “fascist.” Ban Bibles, murder non-believers, make Christian faith a crime? If you’re Muslim, well, that’s just hunky-dory.

For Mehdi Hasan and MSNBC viewers, and for Joe Biden’s Democratic Party, you are the problem. Not someone they just disagree with, not just a political adversary. No, you are to be defined as a “fascist,” which is a polite term for “Nazi.” And what is the solution for “Nazism”? “De-Nazification.” I see dark days ahead for American Democracy. We must stand and fight, these people mean to extinguish the rights of anyone and everyone who doesn’t submit to their views.