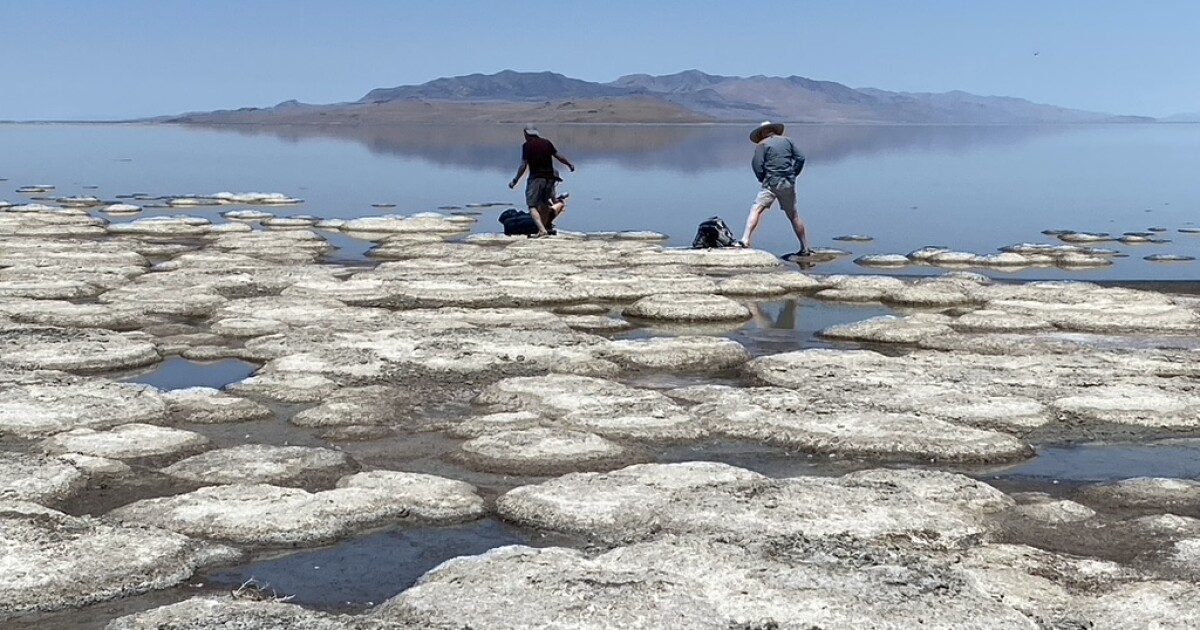 The pitched battle for a Senate majority is being fought, in part, along the Great Salt Lake’s miles of flat expanses in northern Utah.

The iconic ultra-salty lake, larger in square mileage than the state of Rhode Island, is rapidly drying. Its water is being diverted to nearby communities in Utah, one of the nation’s fastest-growing states. The Great Salt Lake’s shrinkage has now become a hot topic in a Senate battle that wasn’t on many people’s political radar screens earlier in the 2022 cycle: the race between Utah Republican Sen. Mike Lee and independent candidate Evan McMullin.

To be sure, Lee is a favorite to win reelection. Lee is nearing 12 years in the Senate, where he has become a national spokesman for conservative causes. Utah is one of America’s most Republican states, regularly giving GOP presidential nominees some of their best results.

But supporters of McMullin, a former undercover CIA officer and chief policy director for House Republicans before growing disaffected with the GOP in 2016, when the party nominated Donald Trump for president, note the results of a Deseret News/Hinckley Institute of Politics poll. The survey, conducted from Sept. 3 to Sept. 21, gave Lee a lead over McMullin of only 36% to 34%. Another 16% said they didn’t know who they would vote for, while 13% would mark the ballot, which includes two third-party candidates in addition to Lee and McMullin, for somebody else.

The McMullin campaign can point to a mid-July Deseret News/Hinckley Institute poll showing environmental protection legislation has emerged as one of the top five issues facing Utah voters. It’s easy to see why, even in one of the nation’s most Republican states. If the Great Salt Lake continues to shrink and shrivel, the effects on the state’s environment, wildlife, and economy would be catastrophic, according to local experts.

The erosion of the largest saltwater lake in the Western Hemisphere reflects the importance of local issues in a high-stakes battle for Senate control. The chamber has been split 50-50 since Jan. 20, 2021, and Democrats hold the majority thanks to Vice President Kamala Harris’s tiebreaking vote.

Running for Senate this year, McMullin is pursuing a nonpartisan campaign, pledging he won’t caucus with either party if he makes it to the Senate. McMullin got a serious boost in April when Utah Democrats decided not to put forward their own Senate nominee and instead combine forces with his candidacy.

On the campaign trail, McMullin has talked up the need for mitigation efforts around the rapidly shrinking Great Salt Lake, where the salinity of the water averages about 12%, making it much saltier than the ocean. Lee, in contrast, has focused, among other issues, on his high-profile roles in helping to get confirmed former President Donald Trump’s three Supreme Court justices. And Lee wrote a book released in June Saving Nine, arguing against expanding the size of the Supreme Court, as some liberal Democrats argue.

But local issues have played outsize roles in state races in recent years, sometimes yielding surprising electoral results. In short, voters often are most interested in topics that affect them directly. In the 2021 Virginia governor’s race, Republican Glenn Youngkin, a wealthy former private equity executive and first-time candidate, emphasized education extensively on the campaign trail. That ended up being a deciding factor with many voters, giving Youngkin a win over Democratic rival Terry McAuliffe, a former governor who sought a comeback.

Salt Lake City and its suburbs are among the nation’s fastest-growing regions, with the population surpassing 1.2 million residents in 2021. But with rapid population growth comes a range of environmental problems. Water that is typically diverted from rivers and snowfall into the Great Salt Lake is being sent elsewhere, causing the lake to reach its lowest water levels on record.

The lake’s shrinking water levels, which threaten the state’s surrounding ecosystem, air quality, and economic growth, have prompted state legislators and local officials to begin allocating federal dollars toward preserving it. But local biologists are also seeking help from federal lawmakers to boost their efforts.

The lake has already shrunk by more than 65% over the last three decades, taking up less than 1,000 square miles, compared to the 3,300 it covered in the late 1980s, according to the U.S. Geological Survey. As the water levels continue to shrink, the lake’s salinity will only rise — threatening the local ecosystem.

Because the Great Salt Lake is a terminal lake, meaning it only retains water that flows into it without outflowing to other bodies of water, it relies on a consistent inflow to maintain its water levels. This has historically been done by melting snowfall in the Utah mountains that is diverted to the lake via small streams and rivers.

However, as the state has experienced a surge in population growth, more and more of this water has been diverted to other sources, such as farms, residential areas, and businesses. This process, combined with climate change, has greatly reduced water levels in the lake.

“We’re taking too much water too early in the process of trickling downstream, and so now we have the pressures of climate change, where we’re seeing these extremely high temperatures and we’re getting more precipitation in the form of rain instead of snow,” Bonnie Baxter, a biology professor at Westminster College in Utah, told the Washington Examiner. “This is on top of a system where we’ve diverted so much of the water and the aquifers are depleted so we don’t get a rebound effect. … In fact, if we get a good water year, what happens is the reservoirs upstream fill up and the water never makes it down to the lake.”

As water continues to shrink, that salinity could reach 17% by the end of the summer and threaten the algae in the water. The algae is a crucial food source for brine shrimp that live in the lake, which in turn are crucial food sources for the millions of migratory birds that travel through the area each year.

But the shrinking water levels pose an even greater threat to the surrounding population: As the lake recedes, more dust that contains harmful contaminants such as arsenic and copper (some of which have settled in the lake due to nearby mining) become airborne.

“That dust problem is a potential catastrophic crisis,” Baxter said. “We get particulate matter and also heavy metals blown into the air, so it’s an air quality problem. As the lake shrinks, more of that basin is exposed, and some of that lake bed will become airborne.”

In theory, fixing the shrinking levels is simple: Divert water back to the lake. This, however, is easier said than done.

Utah legislators have sought to address the shrinking Great Salt Lake because of the potential air quality threats it poses to nearby residents, as well as the state’s economy.

During Utah’s legislative session earlier this year, lawmakers passed a bill that would divert funds to “prepare and maintain a comprehensive plan” for the lake that would develop strategies to “deal with a fluctuating lake level” and encourage nearby development to preserve its water levels. Lawmakers also established a Great Salt Lake Watershed Enhancement Program that aims to increase water flow into the lake.

Utah’s members of Congress, all Republicans, have also pushed efforts to bring federal help to the lake. Sen. Mitt Romney and Reps. Chris Stewart, Burgess Owens, and John Curtis introduced legislation that would authorize $10 million for the U.S. Army Corps of Engineers to “monitor and assess the water availability and conditions” of the Great Salt Lake. Lee also supported the legislation.

McMullin has long pointed to environmental issues in Utah since launching his election bid in October.

While applauding efforts already being spearheaded by local legislators and Congress, McMullin said he would continue working on efforts to preserve the lake. This would include strengthening economic development in rural areas, investing in low-emissions innovation, and developing water conservation practices, among other things.

“There are already some wise steps being taken to address the shrinking lake — and we will all need to be aggressive to do our part,” McMullin told the Washington Examiner. “Utah is one of the most stunning places on Earth. We are fortunate to call it home, and tens of millions of others visit from around the world every year. We have a responsibility to be stewards of this beautiful place that powers our economy.”

McMullin said environmental issues are just one area where that attitude can help, he said, because it’s “an issue where there is common ground.”

“No one wants to see the lake levels receding to record-low levels and or our air quality further damaged by exposed shores and salt flats,” McMullin said. “This Senate race is about replacing divisive and ineffective senators like Mike Lee, changing the broken politics of Washington, and coming together to solve problems. It doesn’t matter if you’re a Democrat, Republican, or independent — the health and future of the Great Salt Lake affects all of us, and we have to be willing to work together to address it.”

Lee’s Senate office and reelection campaigns did not respond to questions from the Washington Examiner about Great Salt Lake erosion mitigation efforts.