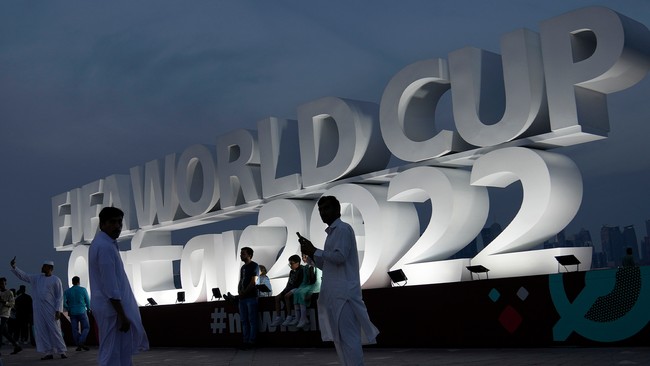 The World Cup and Rivalry Saturday show that people feel most related to local places and are not just cogs in some worldwide community.

The Quadrennial World Cup has returned, and even those who do not pay much attention to soccer/football might watch some of the action or keep tabs on the teams playing. The World Cup has brought a million fans to Qatar and over a billion watch games throughout the world. Even in Israel, whose national squad did not cut, people are enamored by the event and watch the games with great interest. I went to my favorite local liquor store and found two of the young staff with a tablet computer watching Saudi Arabia remarkably defeat Argentina. A local politician suggested punishing terror convicts by not letting them watch the games. His request was denied. Fans love their teams and great rivalries spanning the globe are played out daily from the sands of Qatar.

If one thinks about the fan passion for their country’s squad, he/she realizes that yes, borders do matter. Whereas the Davos crowd and much of the Democratic party wish for a world without borders and with some type of transnational government, the World Cup—and college football rivalry Saturday—shows clearly that people feel a special bond to their countries and states and will travel at great expense to see their college brothers or fellow countrymen fight it out for the chance to hold up a Big Ten or World Cup trophy. How is it that countries that have mutual borders can so passionately root for their squad and against the other? The globalists are enthralled that the US southern border is open to anyone who can make it across. Yet, we see that Brazil and Argentina as well as France and Spain are great rivals, and their fans feel strongly for their home country and much less so for their immediate neighbors. This behavior makes sense to those who love their countries but for the globalists, why would one country be any different than another? They are all in favor of Europe taking in millions from Africa and the Middle East, even if it means destroying the local culture and way of life. The new Italian government understands the risks of uncontrolled immigration and has taken the first steps to stop it now. A few years ago, Mexico played the US in a “friendly” match in LA, and not surprisingly, the large Mexican-born fan base cheered the visitors and booed the country for which they had made such an effort to reach.

A long time ago, when I was a Freshman at Harvard, I took a very popular course from Professor Michael Sandel. At that time, he was a rising star; today, he is a veritable rock star on campus. One of the theories that Professor Sandel postulated was that individuals have, if you will, concentric rings of identity: family, religion, home, state, country, etc. Those identities help to define a person and the decisions that he/she makes. The globalists wish to destroy these rings, just as Mao and other Communists worked to destroy the natural bonds between an individual and his or her family and surroundings. Yet, we see with the passion of the masses at the World Cup that people still feel proud to call themselves citizens of a very specific country and are not interested in rooting for Land Mass 42 that in the past was once known as Ecuador. The Globalist dream of putting all of the worlds into a blender and getting some type of homogenized product is destructive and divisive. Germany sits on huge coal reserves but uses solar panels, though it is far too north to benefit from solar energy. The US has the largest hydrocarbon reserves in the world yet joins Europe and China in installing inefficient and ugly wind turbines. There is a push for a minimum 15% tax on all corporations all over the world. Does it matter if such a tax as imposed might wipe out small businesses if this somehow benefits some ill-defined worldwide greater good? John Kerry just signed up the US to pay “energy reparations” to third-world countries. Local conditions, customs, tradition, and religion will never give to globalist ambitions of creating by force a single playing field for everybody. All people are equal; not all people—or countries—are the same.

One has only to look at the European Union to see the problems with trying to throw disparate cultures together. Greece and Italy joined with Germany and France, but the Greeks and Italians do not produce like their northern neighbors or save like them. Both countries suffered terribly with the 2008-2009 economic downturn because, simply speaking, they are not like Germany. The faceless bureaucrats in Brussels tried to impose, of all things, rules on the shape of olive oil bottles on EU restaurant tables. Countries in the south of the union balked as they put olive oil on the tables and did not want to be told what type of bottles they can use. Yet this is what John Kerry and his friends at Davos want to do to the world: to tell each country how much energy it can use and in what form, to ban fertilizer even if it wipes out local agriculture, to determine what types of industry can and cannot exist and where, and to allow people to move freely without any consideration for the locals already present in their former countries. Their dream is an international government that supersedes local and national governments, and of course, they will be the ones in charge. Brexit was a fight to get power back to the UK from the EU juggernaut to let UK citizens determine their future. Such a fight is now brewing on a much larger scale. Look at the Dutch farmers fighting for their livestock and livelihood. Davos may be in Switzerland, but the World Economic Forum’s destructive ideas for a “new world order” are fanning out throughout the world.

The lessons from the World Cup should tell the globalists that people feel a strong bond to their location, more so than to some nebulous world entity. People feel very strongly about their home countries, even if they are connected to them by forces, not of their choosing—they were born and raised in those countries. They love home and root raucously for the success of their national teams even though they’ve never met a single player and all year long those same players play for clubs far away from their home country. It is a beautiful sight and it gives strength to the idea that yes, borders do matter, and yes, those who live in a country should have priority over those shipped in to fulfill some type of liberal/globalist fantasy of a world without borders. Is everything perfect between the nation-states? Of course not. Israelis for the first time were allowed to fly directly to Qatar, the nation that has brought suitcases filled with millions of dollars to the terrorist government of Hamas in Gaza. So there have been some heartwarming stories of Iranians meeting their first Israelis. There have also been stories of Israelis threatened and kicked out of cabs and restaurants to the point that they claim to be from Europe rather than endure more abuse. No system is perfect, but people feel a special bond to the countries in which they live, and the globalist dream of wiping out that feeling will only lead to their own goal for the jet-setting elite who could not care less about those painted fans wearing their national colors in the stands of Qatar