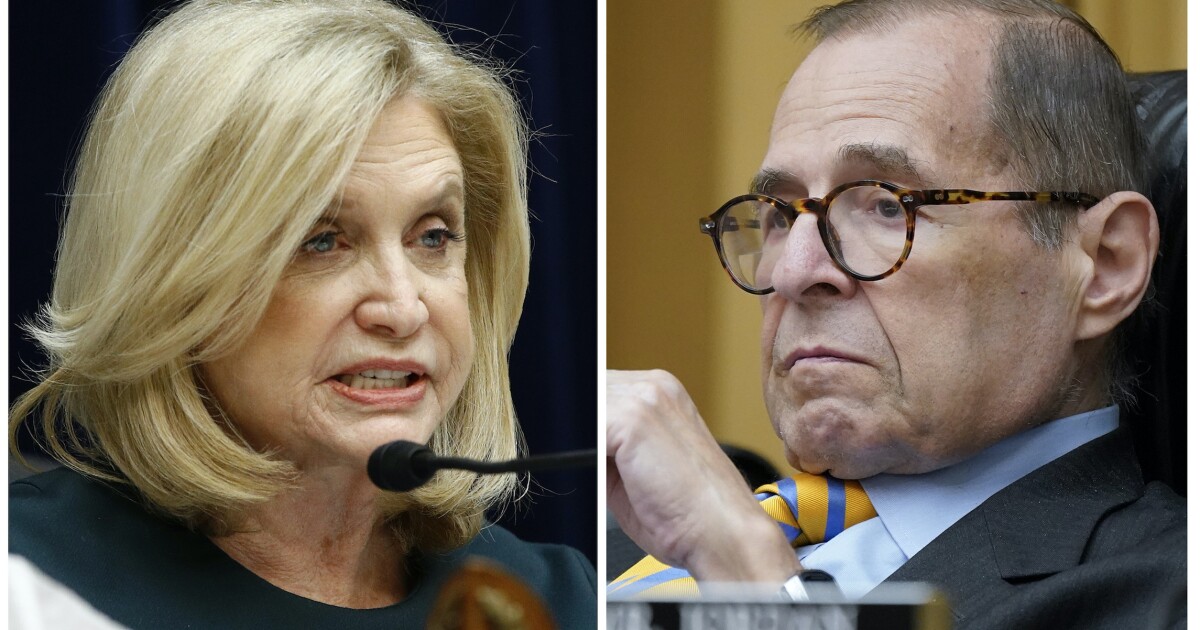 Rep. Carolyn Maloney launched a new television ad centered on the issue of abortion in her Democratic member vs. member primary against her longtime House colleague from New York City, Rep. Jerry Nadler.

“You cannot send a man to do a woman’s job,” says Maloney in the ad, part of an increasingly bitter fight between the two liberal Democrats who share similar voting records over nearly 30 years together in office.

The ad campaign follows Maloney’s recent arrest at an abortion-rights protest outside the Supreme Court alongside a handful of other Democratic lawmakers, including her New York delegation Democratic colleague Rep. Alexandria Ocasio-Cortez.

I’ve just been arrested at the Supreme Court protesting the horrendous overturn of Roe v Wade.

This is the time to stand up, speak out, and not shy away when seeking justice and equality. pic.twitter.com/XhwteFktl5

The primary in the new 12th District, the result of the state’s recent redistricting process, cast the pair — onetime allies, as well as New York City political heavyweights and committee chairs — against one another. The compact district includes both lawmakers’ home political bases — Nadler on the Upper West Side and Maloney on the Upper East Side.

The new ad seeks to paint Maloney as a champion for gender equality, including an anecdote about how she was denied family leave at one of her jobs but returned to work anyway. She also tied her decision to run for office to Planned Parenthood v. Casey, a Supreme Court decision following Roe v. Wade that was also overturned in Dobbs v. Jackson Women’s Health Organization.

“Being at the forefront of women’s rights has taught me that we can fight back and win,” Maloney said in the ad.

The Nadler campaign did not respond to a request for comment from the Washington Examiner.

Both Democrats support abortion rights, and Nadler and Maloney each have a 100% rating from Planned Parenthood Action Fund’s scorecard.

But the new ad suggests Maloney sees the issues of gender equality and abortion rights as a pathway to victory over Nadler.

“Women fight harder and when a woman is at the table, the agenda changes,” Maloney told MSNBC’s Morning Joe Monday.

Addressing her protest arrest, Maloney continued, “I’ve been in the fights in the street.”

“Just got arrested last week — the week before last,” she said. “And also in the back room. I can tell you, in the back room, when the doors are closed and the cameras are off, the people who stand up and fight for the death for women’s rights are women.”

Nadler has also leaned into identity politics for the race, seeking to highlight his status as New York City’s “last remaining” Jewish representative, which Nadler recently told the Washington Post matters for the representation of a city with the largest Jewish population anywhere in the world outside Israel.

A May poll by WPIX/Emerson College/Hill found Maloney leading Nadler in the contest by double digits. The primary is scheduled for Aug. 23.

The New York City district is a safe blue seat, but Maloney’s move to campaign on abortion mirrors a strategy by other Democrats who are seeking to run on the issue, as they aim to defend their congressional majorities amid President Joe Biden’s low approval ratings and voter concern over inflation.