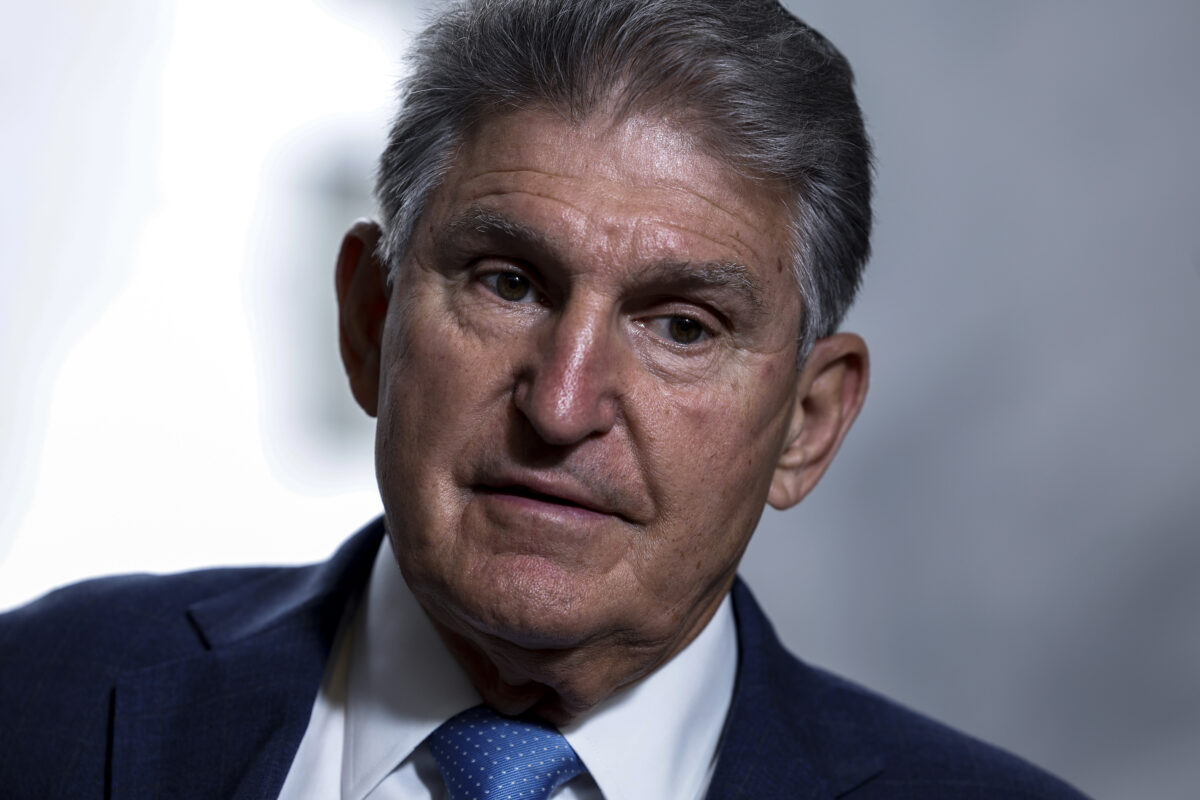 Sen. Joe Manchin (D-W. Va.), a key sponsor of the recently-passed Inflation Reduction Act, has vowed to ensure that the Internal Revenue Service (IRS) “doesn’t harass anybody” after receiving an $80 billion appropriation in the bill.

The IRS provisions of the Inflation Reduction Act were among its most controversial.

The $80 billion allocated to the agency by the bill sextuples its budget, and Republican critics have warned that the bulked-up IRS could hire as many as 87,000 new agents. These agents in turn, critics have said, will be let loose among middle-class Americans and small businesses, despite Democrats’ claims that nobody making less than $400,000 per year will see their tax bill increase.

Speaking to reporters on Aug. 17 after President Joe Biden signed the legislation, Manchin vowed to ensure that this does not happen.

A key claim for Democrats, including Manchin, in both the now-defunct Build Back Better Act and the Inflation Reduction Act was that the bill would not raise taxes on people making less than $400,000 per year.

However, critics have raised eyebrows at this claim, citing the effects that raising business taxes will have on consumer prices and workers’ wages, as well as the potential for abuse by the greatly-expanded IRS.

Specifically, the bill would impose a 15 percent minimum tax on corporations with more than $1 billion annually in revenue, using book income rather than taxable income as the gauge, which means the bill does not take into account exemptions, write-offs, deductions, or other tax code rules when deciding whether to apply the tax.

Neither, Brashers said, are they targeting businesses necessarily.

“A brand can’t pay a tax,” he said. “Technically, legally, the corporations are the ones paying taxes, but ultimately that has to be paid by people, one way or the other. It’s not like Jeff Bezos—if you tax Amazon—that this is coming out of Jeff Bezos’s pocket.

“It’s coming out of everyone’s pocket that’s involved in that operation, whether you’re a worker, if you buy the products, if you have any stock in the companies, if you have a 401(k).

“These are gonna be taxes that are just kind of economy-wide.”

However, the effects of the IRS provisions have caused even more alarm among critics.

“They’re expanding enforcement of [tax law by the IRS], they’re going to expand audits on individuals and businesses,” he said, noting the appropriation of $80 billion to bulk up the IRS.

Proponents of the bill suggest that, in addition to the new tax code changes, a bulkier IRS will bring in an additional $124 billion annually through enforcement efforts.

The funding for the IRS will go toward “necessary expenses for tax enforcement activities … to determine and collect owed taxes, to provide legal and litigation support, to conduct criminal investigations (including investigative technology), to provide digital asset monitoring and compliance activities, to enforce criminal statutes related to violations of internal revenue laws and other financial crimes … and to provide other services.”

Brashers argued that the IRS expansion will affect lower-income individuals and small businesses.

“If you look at the [dispersion] of audits right now, there’s a lot of audits that happen on the lower end,” he said. “Especially on the business side: if you’re a small business, a sole proprietor—if you’re running your own books—a lot of times the IRS looks at that as a prime target because you don’t have the accountants that are keeping everything buttoned down necessarily.

“If you’re a sole proprietor and you’re keeping your own books … it’s probably just gonna be harder for you to keep up with the convoluted tax code.

“So, if anything, more of that weight is probably gonna hit small businesses.”

House Minority Leader Kevin McCarthy (R-Calif.) expressed a common refrain among Republicans in a recent Twitter post, in which he warned of the risk of the expanded IRS “spying” on American citizens.

“Democrats are scheming to double the size of the IRS by hiring an army of 87,000 new agents to spy on Americans,” McCarthy wrote.

Democrats are scheming to double the size of the IRS by hiring an army of 87,00 new agents to spy on Americans.

To put that in context —> We have fewer than 20,000 Border Patrol agents. We should hire there instead.

Manchin Weighs in on Climate Policies

Manchin has also weighed in on some of the bill’s new climate policies, including going so far as to condemn a tax credit for electric vehicles (EVs) in the bill that he helped to write.

Climate policies are by far the most expensive items in the $700 billion spending bill, coming out to around $400 billion in new bills for taxpayers.

Emphasized by Democrats in the legislation are policies to give tax credits of up to $28,000 per household to families who switch to EVs, more efficient appliances, and renewable energy sources for their homes like solar panels.

Critics have blasted the EV kickbacks for being a benefit largely to the wealthy families who can afford the expensive vehicles at the cost, in taxes, to poorer families who cannot.

Speaking to reporters after the signing of the bill, Manchin admitted that he too was not thrilled with the EV tax credits.

“I’m not a fan of the credits, okay?” Manchin confessed. “I’m a fan of basically building a supply chain here so we don’t have to be dependent on China to send their batteries and their anodes and cathodes and everything. So I’ve always said that.

“People are waiting a year right now to get their cars. Well, why would you give a discount? Why should the government give a discount when you’re willing to wait for a year for a product you want? If we’re going to do something, do something productive and good. Build a supply chain here.”

Further, the policies in the bill do not allow families who lease an EV, as opposed to buying one, to collect the tax credit. Instead, those credits go directly to the vehicle manufacturer who leases out the vehicle. Manufacturers are not required under the terms of the bill to pass these savings onto the consumer.

When asked why it was the case that leases did not qualify for the credits, Manchin suggested that he didn’t much discuss the issue during negotiations.

“We never went into that,” Manchin admitted. “We really didn’t. We went into basically making sure that used cars, used EVs would get the [credit], so that was the thing we compromised on.”

Manchin as well touched on fears of “overreach” by the Environmental Protection Agency (EPA) in enforcing the new climate rules contained in the Inflation Reduction Act, and vowed to work to ensure that this does not happen.

“I want to make sure the EPA doesn’t overreach, and it’s balanced of how they do it. You know, there’s always a way to go out, rather than going out with a cease and desist order, go out with an idea of how you make it better, work together.

“[Critics] said this is a green bill, it’s not a green bill … it’s a red, white, and blue bill,” Manchin added.