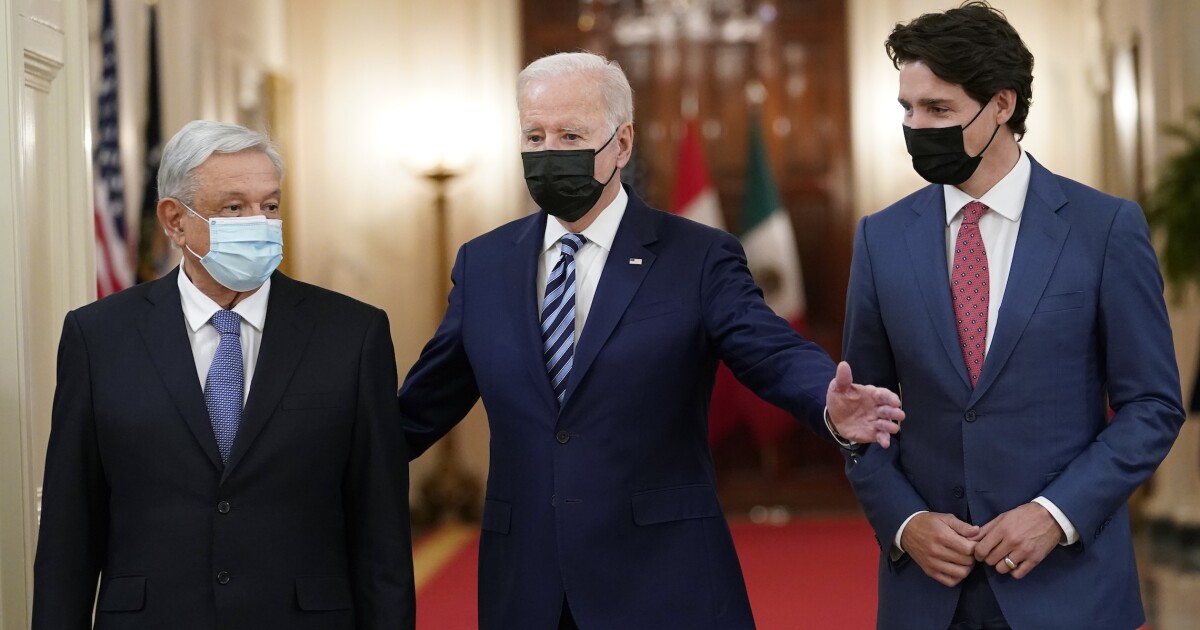 The Manchin-Schumer bill would expand tax credits for electric vehicle manufacturing in Canada, a provision meant to ease production and fulfill climate goals that comes at the expense of domestic labor interests.

The Inflation Reduction Act of 2022 expands the $7,500 EV tax credit to all North American manufacturers, doing away with an earlier plan that would have limited the tax credit to U.S.-made EVs.

The changes in the new deal reached by Sen. Joe Manchin (D-WV) and Senate Majority Leader Chuck Schumer (D-NY) were praised by Canadian officials. They also come after an intense lobbying effort from Canada’s lobbying interests on Capitol Hill — as well as from Canadian Prime Minister Justin Trudeau, who directly pressed President Joe Biden to make the changes during his visit to the White House last November.

By cutting Canada out of the picture, industry officials argued, U.S. lawmakers would have risked hampering domestic production in a short-sighted effort to nationalize EV manufacturing.

In excluding Canada from EV production as it tries to start an manufacturing “race with China,” the United States would have been “shooting [itself] in the foot” in a sector it hopes to be competitive in, Flavio Volpe, the president of the Canadian Automotive Manufacturers Association, told the Washington Examiner in an interview.

“What we argued for the last year in Washington was: ‘If you exclude vehicles assembled in Canada, you are hurting American companies more than anybody else,’” Volpe said. “Their operations just happen to be on this side of the border.”

DAILY ON ENERGY: HOW MANCHIN-SCHUMER DEAL THREATENS COAL AND WHAT IT MEANS

“North America is stronger competitively as a unit than just separate countries,” and without expanding the incentive to Canada, “you are essentially pitting [them] against each other,” Joseph McCabe, president and CEO of AutoForecast Solutions, said in an interview. “Canada has a significant amount of EV investment now from most of the manufacturers out there.”

Canada manufactures a total of 2 million cars per year, Volpe noted, and is home to local assembly lines for five major car manufacturers — Ford, General Motors, FCA, Toyota, and Honda — that have all committed to making EVs by 2023 or 2025.

Roughly 48% of parts in those vehicles come from suppliers in the U.S. or Mexico, including steel and resins for plastic parts, Volpe added. One million of those 2 million cars are made by American companies: Ford, GM, and the U.S. divisions of Stellantis — Chrysler and Dodge.

The changes from the initial version of the bill also highlight the tension among Democrats when it comes to squaring labor goals with progressives’ efforts to fight climate change.

The West Virginia senator also successfully lobbied to exclude from the Inflation Reduction Act a $4,500 tax credit bonus for domestic union-made vehicles that was included in the earlier version.

Manchin had argued that the proposal was “ludicrous” and would subsidize a product with an already long waiting list.

The earlier version had also sparked stiff opposition from nonunionized EV manufacturer Tesla, as well as from Toyota, Honda, and other foreign-owned automakers.

“I think the first bill was put forward, in many ways, to bolster Democrats’ relationship with the United Auto Workers,” Volpe said of the original proposal. “And so I don’t think there was any malicious intent … or intent to exclude Canada. I think they were gearing it for best domestic political advantages.”

“When we first engaged Democrat leadership in the Senate, they said, ‘Well, we’ll fix it after the bill passes,’” Volpe added. “And as you can imagine, that’s not bankable.”