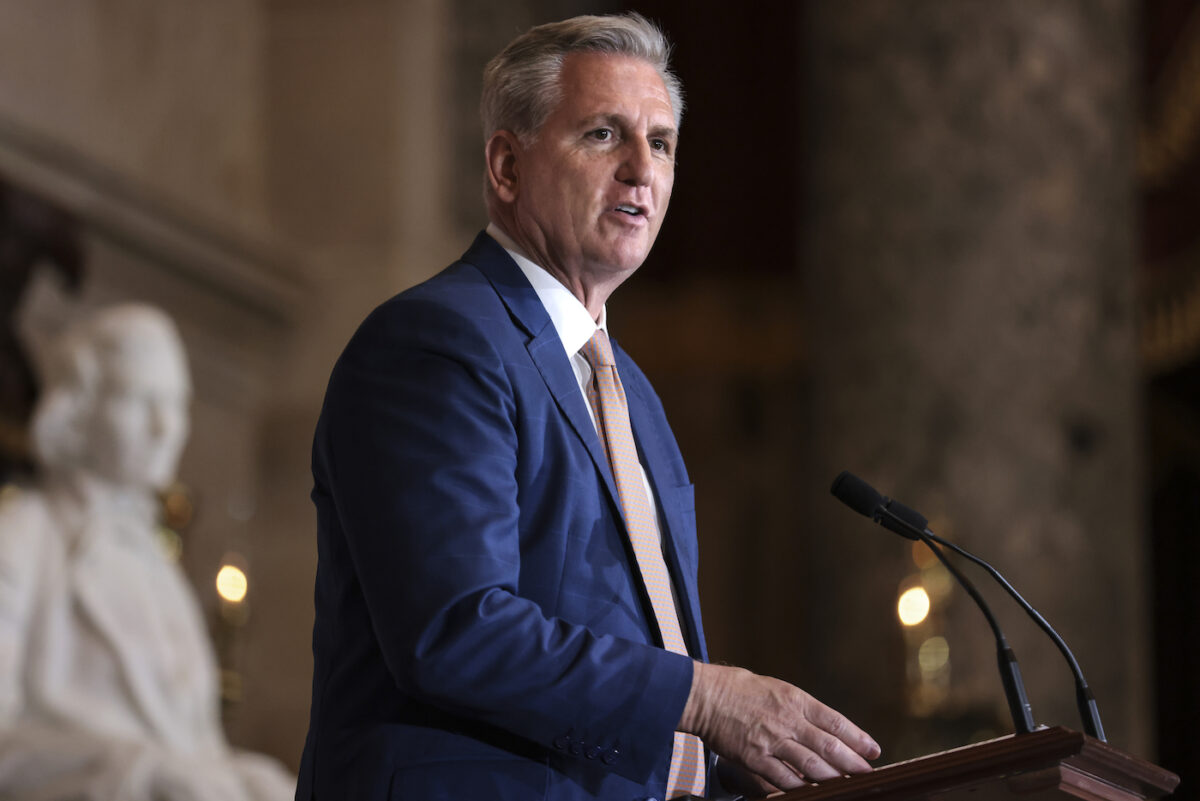 House Minority Leader Kevin McCarthy (R-Calif.) suggested that he opposes efforts from within his caucus to impeach President Joe Biden.

If Republicans take the House, as observers expect, McCarthy is likely to be elected speaker of the House.

After two failed efforts by Democrats to remove President Donald Trump from office, and amid scandals surrounding Biden’s role in his son’s business dealings, some Republicans have already put forward an impeachment resolution for Biden.

Though it is almost certain that the resolution will not be considered under the current Congress, Rep. Marjorie Taylor Greene (R-Ga.) introduced such a resolution against Biden.

In the articles, Greene cited the involvement of both Bidens in Burisma, a Ukrainian oil and natural gas company. Greene accused Biden of “enabling bribery and other high crimes and misdemeanors” through his involvement with the firm.

Though that resolution has been lying dormant since March 2021, Republicans could take up the issue again if they retake the majority.

Republicans could also use the majority to seek impeachment for Biden’s heavily-criticized role in the withdrawal of U.S. forces from Afghanistan, which culminated in an unexpectedly rapid fall of the nation to the Taliban and a frantic weeks-long effort to rescue Americans and Afghan allies trapped in the country.

But that hinges in part on McCarthy’s support. As speaker, McCarthy would have wide discretion over what comes to the floor for a vote—meaning McCarthy could kill any such effort in its cradle if he opposed it.

At the end of September, McCarthy indicated that he would be hesitant to use the impeachment process as political revenge, despite Democrats’ unprecedented use of the process during the 116th Congress.

“We will uphold the law. We will not play politics with it,” McCarthy told reporters at the time.

On Oct. 19, McCarthy reiterated these sentiments in comments to Punchbowl News.

“I think the country doesn’t like impeachment used for political purposes at all,” McCarthy said. “If anyone ever rises to that occasion, you have to, but I think the country wants to heal and … start to see the system that actually works. What we’ve done in the Commitment to America, but we’re really focused on the economy, on crime, and the border.”

Voters “don’t want you to focus on it,” McCarthy added. “We focus on accountability.”

McCarthy intimated that efforts to impeach Biden would be hypocritical after Republicans’ criticisms of Democrat-led impeachment efforts against Trump.

“I don’t see it before me right now,” he continued. “You watch what the Democrats did. They all came out and said they would impeach before Trump was ever sworn in. There wasn’t a purpose for it. If you spent all that time arguing against using impeachment for political purposes, you got to be able to sustain exactly what you said.”

No Comments on Lower Positions

McCarthy did not address other impeachment resolutions and efforts that target lower government officials.

For instance, in Oct. 2021, Rep. Scott Perry (R-Pa.) introduced articles of impeachment against Attorney General Merrick Garland. In the intervening months, GOP dissatisfaction with the attorney general has ballooned, particularly in the wake of the FBI’s much-criticized raid of Trump’s Mar-a-Lago home in Florida.

Rep. Chip Roy (R-Texas), whose popularity among Trump-allied Republicans has blossomed in the 117th Congress, also called in a March 2022 letter for Republicans to take up impeachment proceedings against Homeland Defense Secretary Alejandro Mayorkas, who Republicans blame for the current border crisis.

Moreover, it still remains unclear whether these efforts would have the green light from a potential Speaker McCarthy, who may prefer for his caucus to focus efforts on probes and inquiries into the policies pushed by Biden and his cabinet over the past two years.