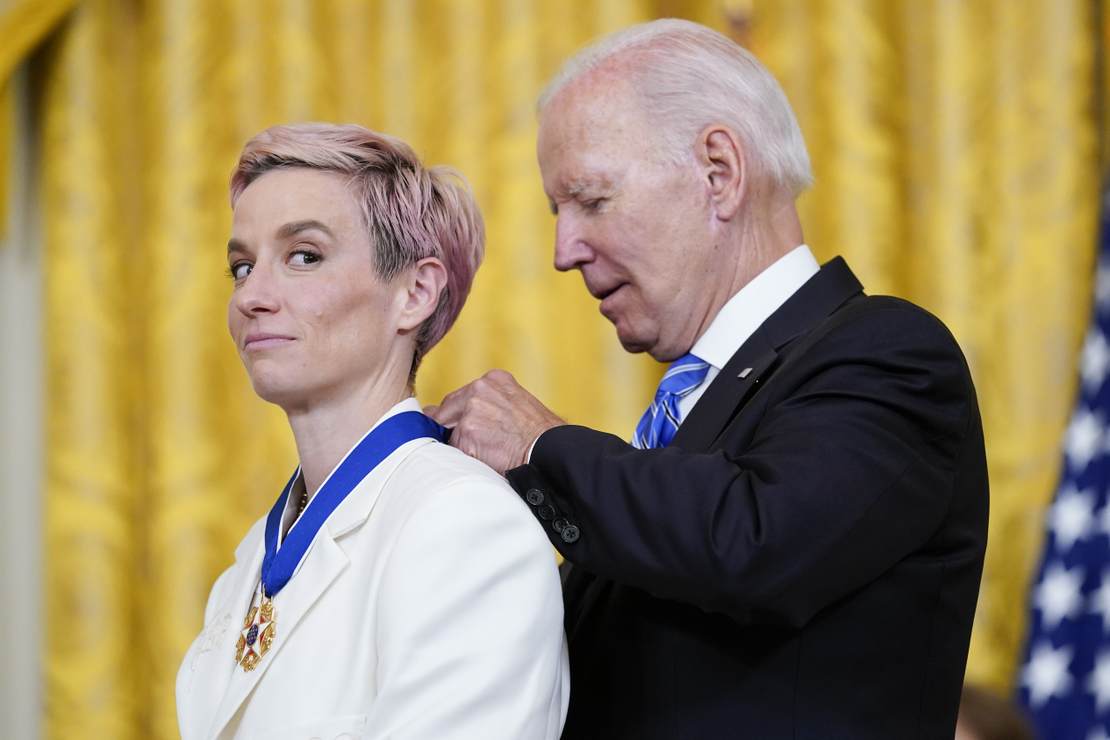 The White House held the Medal of Freedom ceremony on Thursday and among the recipients were former Congresswoman Gabrielle Giffords, the late Sen. John McCain, and Olympic gold medalists Simone Biles (gymnastics) and Megan Rapinoe (soccer).

The announcement earlier this month that Rapinoe was in line to receive the nation’s highest civilian honor was met with outrage from people who have been disgusted with her penchant for trashing the police and her country before soccer games and during puff piece interviews, as well as recent comments from the self-styled “progressive activist” in which she said that when it came to the “transgender women in women’s sports” debate that girls’ grade-school sports teams “just [aren’t] that important.”

During today’s ceremony, however, the uproar over news that Rapinoe would be receiving the award took a back seat – however temporary – to Rapinoe’s reaction when it came time to President Biden awarding it to her.

Watch below as midway in it looks like Biden, who is struggling to snap the award in place, is mumbling something to Rapinoe in the process. She reacts by turning her head slightly and raising an eyebrow as if to say “say what?”:

I saw numerous Twitter users suggest Rapinoe’s reaction was in response to being so close to the notorious hair sniffer:

The face every woman makes when she realizes Biden is behind her and within sniffinggroping distance pic.twitter.com/0fCwJfbbjW

Some even suggested he actually sniffed her hair. I watched the video a couple of times. No need to Zapruder it. 😉 It didn’t look like that’s what he did.

“She just had he hair sniffed, bracing for a 2nd sniff,” opined one.

I watched the video a couple of times. No need to Zapruder it, nor add sound effects for emphasis. 😉 It didn’t look like that’s what he did.

Others believed it was just Rapinoe “mocking” Biden’s infamous “ineptitude” considering those extra seconds he took standing behind her after draping the medal sash around her neck:

Video of Simone Biles receiving the award was also shared on Twitter, and was met with similar reactions, although from the clip below you can see that it looks like Biden was just briefly muttering something to her in her ear (she’s a lot shorter than him) as he gave her the medal:

Simone Biles, the most decorated U.S. gymnast in history, became the youngest recipient of the Presidential Medal of Freedom.

She is an outspoken advocate on athletes’ mental health, children in foster care and sexual assault victims. pic.twitter.com/W3MZch2TZ6

That said, I wouldn’t put it past Biden to say and do something inappropriate during an official ceremony. It’s happened before and, unfortunately for the women who will interact with him in the future, it’s likely to happen again at some point. Because that’s just who he is. He’s not called “creepy Joe” for no reason.