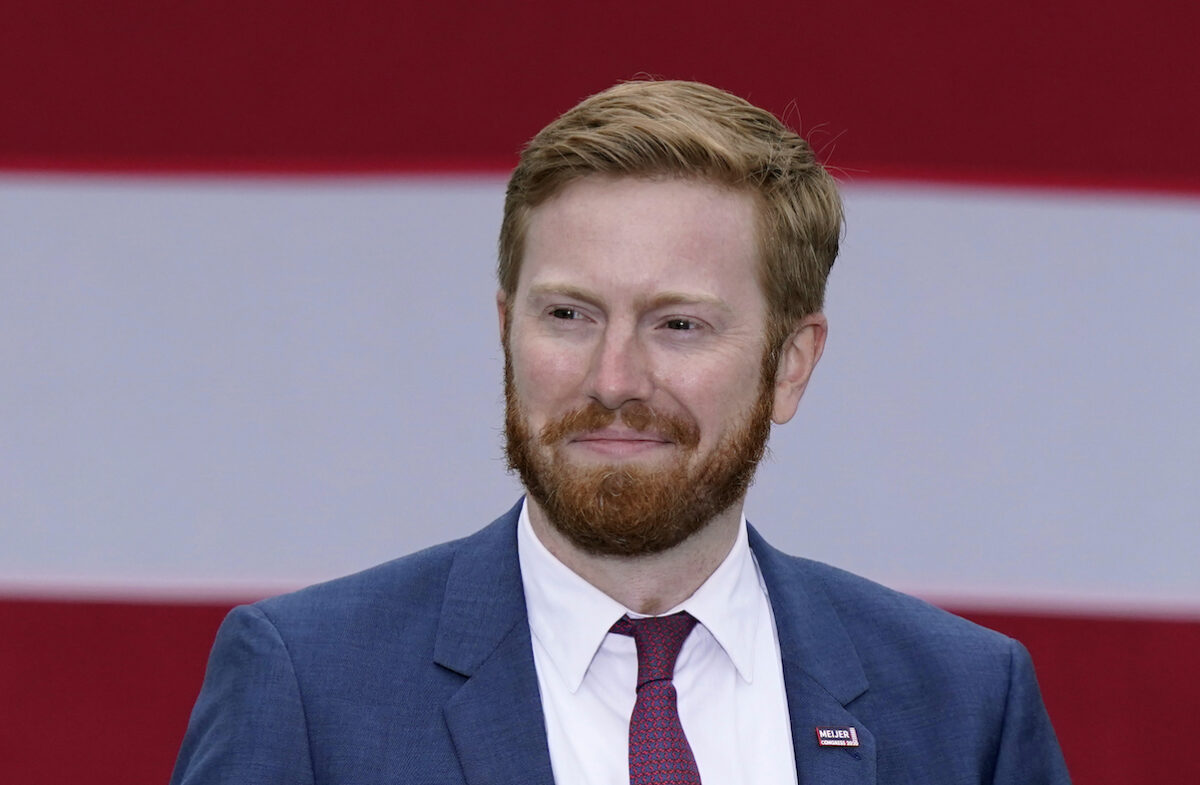 Hours before western Michigan voters head to the polls for the primary, first-term Republican Rep. Peter Meijer blamed the Democratic Congressional Campaign Committee for funding a $435,000 ad that has given airtime to his competitor, Donald Trump-endorsed John Gibbs.

Democrats had praised Meijer, who represents Michigan’s 3rd Congressional District, when he was one of 10 House Republicans who voted to impeach President Trump over the U.S. Capitol breach on Jan. 6, 2021.

“To leading Democrats, we were the Good Republicans,” Meijer wrote on Aug. 1 in a column titled “Why the Democrats Are Funding My Far-Right Opponent” that appeared on the Substack outlet, Common Sense.

“I am a staunch defender of the Constitution and the rule of law. Accordingly, I became the first incoming freshman to recognize former Vice President Biden’s presidential victory. Then, three days after I was sworn into office in January 2021, I was in the House chamber when rioters overran the Capitol,” Meijer wrote.

“A week later, I joined nine other Republicans, including Liz Cheney, to impeach then-President Donald Trump with a heavy but resolute conscience. I am the only freshman in history to impeach a president of his own party,” he added.

Meijer’s decision to impeach Trump motivated the former president to endorse Gibbs, who holds a computer science degree from Stanford University and a master’s degree in public administration from Harvard University, and worked as a U.S. Department of Housing and Urban Development (HUD) official during the Trump administration.

The ad appears to attack Gibbs, but has also provided airtime for a campaign that has not had the money to elevate its name recognition on television in the Grand Rapids market, which critics say was the DCCC’s ultimate objective.

“Gibbs has promised to push that same conservative agenda in Congress—a hard line against immigrants at the border—and so-called patriotic education in our schools.”

Meijer wrote that it would seem like “the Democrats would look at John Gibbs and see the embodiment of what they say they most fear. That as patriots, they would use every tool at their disposal to defeat him and similar candidates that they’ve said are an existential threat.” Instead, they are funding Gibbs.

Meijer added that the $435,000 ad buy “was more than Gibbs raised over the entire duration of his campaign. It was also nearly 100x the support Donald Trump himself offered to Gibbs (a single $5,000 contribution from the Save America Super PAC). In other words, the Democrats are not merely attempting to boost a candidate over the finish line: They are subsidizing his entire campaign.”

Meijer criticized Democrats for meddling in Republican races beyond Michigan, writing “While claiming the moral high ground, Democrats have been busy rewarding candidates like my opponent across the country.”

He referenced Colorado, pointing out that Democrats have funded $4 million in TV and digital spots to support Jan. 6 rally attendee Ron Hanks over moderate businessman Joe O’Dea in the Republican U.S. Senate primary.

Conventional wisdom, Meijer explained, “dictates that these extreme candidates are less electable than the normal Republicans Democrats targeted to defeat. But with a historically unpopular president in Joe Biden and inflation at 40-year highs, less-electable doesn’t mean un-electable.

“As the January 6 Select Committee continues to warn about the ongoing threat to democracy, their own party dues are paying to help elect the same villains they rail against,” Meijer added.

Rep. Sean Patrick Maloney (D-N.Y.) is chairman of the DCCC. In a July interview with MSNBC, he said that Democrats should be cautious in serving as a spoiler in Republican primary elections but added that the strategy could help Democrats win in November.

“If you’re talking about trying to pick your opponent, you might see us do that, sure,” Maloney said. “And I think sometimes, it does make sense.”

Gibbs or Meijer will face Democrat Hillary Scholten in November’s general election in a newly drawn 3rd District that once favored Republicans but is now friendlier to Democrats.

Meijer defeated Scholten, who is unopposed in the Aug. 2 Democratic primary, by six percentage points in 2020.