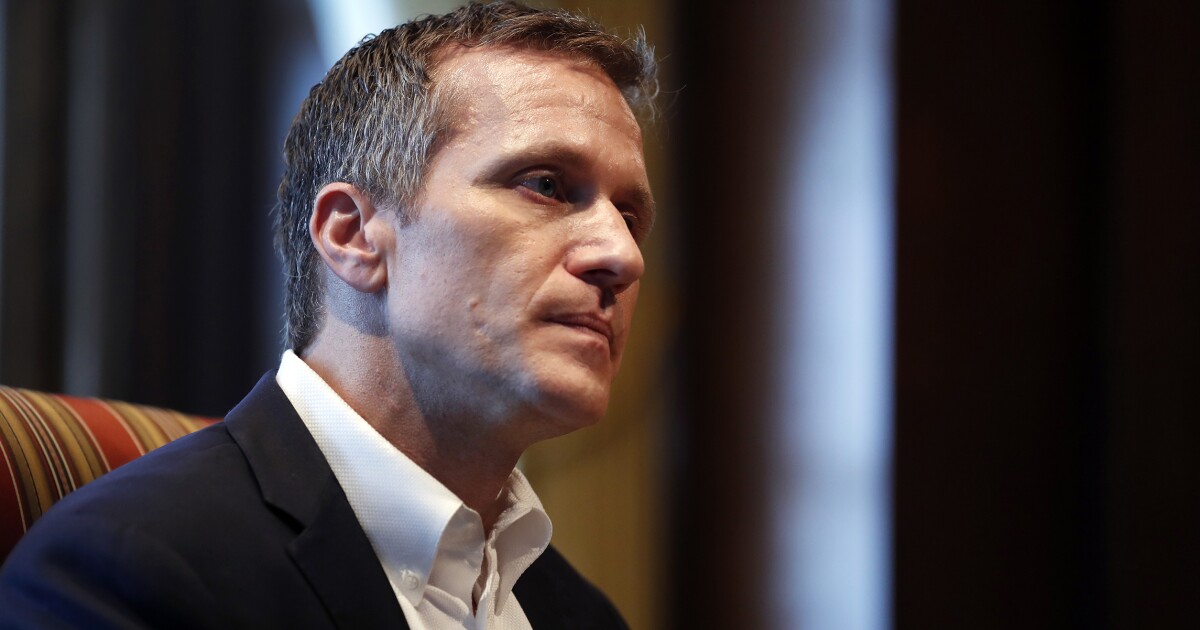 I spent Wednesday on the phone with Republican strategists in the Show Me State to get a sense of how reliable they find recent public opinion polls placing the disgraced former governor in third place, trailing Rep. Vicky Hartzler and state Attorney General Eric Schmitt. And the sense among this group, all of whom are supporting anyone but Greitens, is that the surveys publicized ahead of Tuesday’s closely watched primary are very reliable. Of course, there is one crucial caveat they all concede could revive Greitens’s political fortunes: an eleventh-hour endorsement by former President Donald Trump.

“Whenever there’s a Trump endorsement still hanging out there, the race is always going to be in flux,” a Republican insider in Missouri told me. “Right now, people are throwing dirt on Eric Greitens’s grave. But if Trump suddenly decides to endorse Eric Greitens, it could put him back in contention. Without that, Eric Greitens’s political career is dead.”

There’s no word yet from Trump on what he plans to do in this primary, although in a spring interview with the Washington Examiner, the former president said he did plan to grant an endorsement and did not rule out backing Greitens. I reached out to Trump’s spokesman Wednesday for an update, but my text message went unanswered.

Three polls conducted within the past 10 days showed Schmitt in front, followed by Hartzler and then Greitens.

The surveys suggest support for the former governor is trending in the wrong direction — at the exact wrong time. His polling earlier in the campaign was more favorable, motivating Republican insiders in Washington and Missouri to get collaborate on a super PAC, Show Me Values, that has been hammering Greitens on television for several weeks. Along with attack ads from his primary opponents, the scandal-plagued Republican appears on the verge of being put out to pasture.

The Greitens campaign rejects this characterization of the race, to say the least. Below is the full statement from Dylan Johnson, the former governor’s campaign manager, texted to me by a Greitens spokesman. In it, Johnson calls Schmitt a “RINO,” a “Republican in name only,” and emphasizes Greitens’s opposition to Senate Minority Leader Mitch McConnell (R-KY), whose ouster by Senate Republicans Trump has demanded since last summer.

“Gov. Greitens is the front runner in this race because he’s the only America First candidate who has defended President Trump, and stood up against Mitch McConnell and his RINO allies like Eric Schmitt,” Johnson said. “None of these biased polls — either paid [for] by Governor Greitens’ opponents or under sampling Trump voters — reflect the actual enthusiasm for our campaign.” The Greitens spokesman did not offer any internal campaign polling to refute the conclusion of the surveys they claim are wrong.

Most of the voting in the Missouri GOP Senate primary will take place on Tuesday. The state allows for absentee voting, but Republicans say it will not account for a significant portion of the returns, as it does in many other red states. That means a late endorsement by Trump, not to mention the various television advertisements blanketing Missouri’s airwaves, could (continue to) affect voter attitudes toward the three front-runners.

Show Me Values is running a hard-hitting spot focused on the sexual misconduct allegations that forced Greitens to resign from office — plus related scandals that surfaced during his Senate bid. Hartzler is running a positive-negative advertisement that plays up her strengths and ridicules Greitens and Schmitt, the latter of whom is running a similar ad, touting his accomplishments as attorney general while taking swipes at Greitens and Hartzler.

“I don’t have the patience for D.C. insiders,” Schmitt says in the spot, referring to the congresswoman, or “lying little quitters.” That last dig was directed toward the former governor, whose campaign was dark on the air. However, in mid-July, the group Missouri First Action, a pro-Greitens super PAC, went on television in rural Missouri media markets with a $900,000 advertising buy.

Now, to the field…

Michigan’s 3rd Congressional District: The Democratic Congressional Campaign Committee is on television in this western Michigan swing district, meddling in the Republican primary to boost the candidate they assume is more beatable in the general election.

Hardly unheard of in the annals of political strategy, except in this case, the DCCC is elevating the sort of pro-Trump, so-called election denier Democrats claim constitutes a threat to American democracy. And, in the process, the House Democratic campaign arm is jeopardizing the renomination of Rep. Peter Meijer, among the 10 House Republicans who voted to impeach Trump for his culpability in the Jan. 6 ransacking of the Capitol and a frequent critic of the former president.

This move has upset some rank-and-file House Democrats and is generating understandable criticism from Republicans and conservatives who oppose Trump. The strategy undermines Democratic messaging that Republicans stand ready to overthrow democracy at Trump’s behest, critics say, adding that if that really is a concern, the strategy is irresponsible.

The midterm elections are shaping up as a red electoral wave. Even flawed Republican nominees can win in November under these conditions.

Oregon governor: Republicans last won a governor’s race in Oregon in 1978. Jimmy Carter was president, the average cost of a gallon of gas ranged from 65 cents to 71 cents, and Grease, Animal House, and Close Encounters of the Third Kind topped the box office.

But with a red electoral wave brewing this year, Republicans are spying an upset. Fueling their optimist are four factors: the aforementioned favorable political environment, an unpopular incumbent in term-limited Gov. Kate Brown (D), an apparently divided Democratic Party, and a Republican nominee, former state legislator Christine Drazan, who, at least in the early going, is inspiring confidence.

On the Democratic side, there is an internecine battle between the party’s nominee, Tina Kotek, and state Sen. Betsy Johnson (D), who has spent roughly $7 million so far and is running as an independent. That could enable Drazan to overcome the challenges Republicans typically face in deep-blue Oregon. Indeed, garnering a plurality of the vote might just be enough to win the governor’s mansion.

2024 watch: Sen. Ted Cruz (R-TX) has said in interview after interview that running for president is the most fun he has ever had, other than the fact that he lost. And he has spent the years since preparing for a second White House bid.

But the runner-up for the Republican nomination in 2016 signaled that he might be hedging on that next campaign when he conceded to Fox News that the deep field of would-be GOP presidential contenders is waiting on Trump before making any final decisions on a 2024 bid.

“We’ll see what happens,” Cruz said. “Look, the lay of the land is, everyone is waiting to see what Trump decides to do. Anyone who tells you they’re not is lying to you. And he’s going to decide on whatever time frame he desires.”

Trump essentially declared in a recent interview that he has decided to run for president in 2024, saying the only decision left to make was whether to announce his bid before or after this year’s midterm elections.