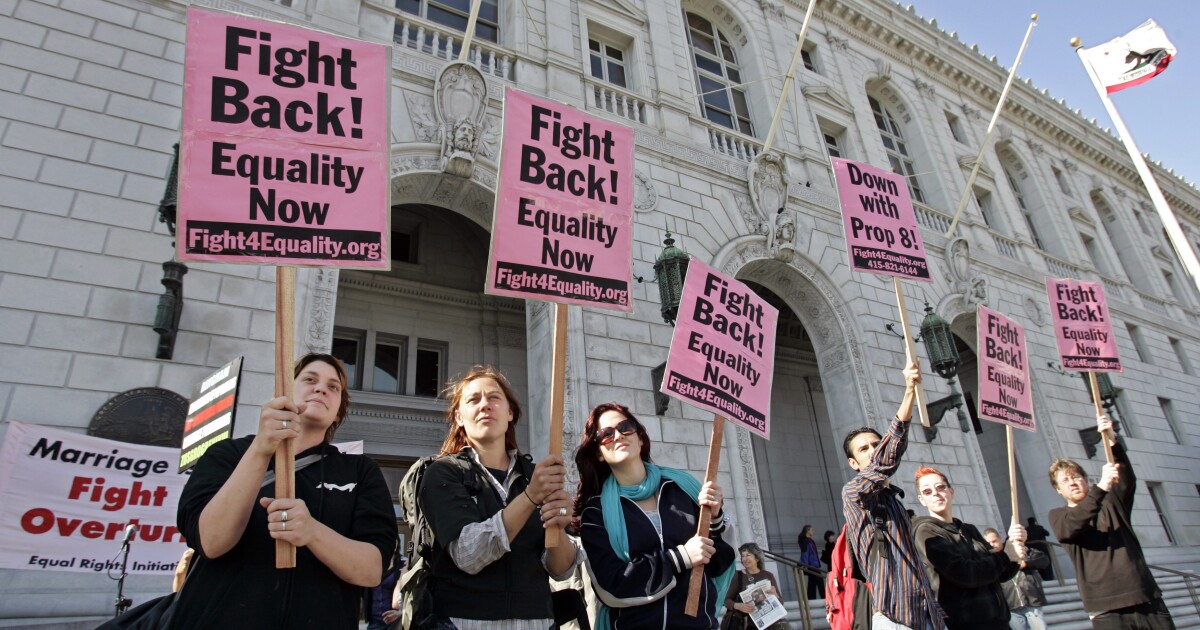 Senate Republicans may yet sink House-passed legislation that would essentially codify federal same-sex marriage rights granted by the Supreme Court in 2015.

But that was far from certain Wednesday as the Senate began informally considering the Respect for Marriage Act, which cleared the House 24 hours earlier with unanimous Democratic support and 47 out of 204 available Republican votes. There immediately appeared to be four GOP votes for the bill, while several other Senate Republicans, including Senate Minority Leader Mitch McConnell of Kentucky, were noncommittal. In other words, it’s quite possible the 10 Republican votes needed to break a filibuster and send the legislation to President Joe Biden’s desk could materialize.

Partisans will decide if the Republican Party’s softening opposition to same-sex marriage is worth cheering about — a conclusion that no doubt depends on what happens in the Senate in the ensuing days. Already, some House Republicans who voted in favor of the Respect for Marriage Act are coming under fire at home from social conservatives who wield influence inside the GOP.

“Last night, the U.S. House of Representatives rejected the truth that marriage is between one man and one woman. Especially disappointing, three of Iowa’s representatives … voted to redefine marriage,” read a statement from The Family Leader, a conservative group in the Hawkeye State whose endorsement in quadrennial GOP presidential caucuses is much sought after. “We urge Senators Grassley and Ernst to oppose the redefinition of marriage.”

So, Sen. Chuck Grassley (R-IA), who is up for reelection this year, and Sen. Joni Ernst (R-IA) are both under pressure to oppose legislation that would require all states to recognize same-sex marriages. Nonetheless, Ernst told Huffington Post’s Igor Bobic she is “keeping an open mind,” adding: “I have a good number of very close friends that are same-sex married.” Reps. Mariannette Miller-Meeks and Ashley Hinson are the two House Republicans from Iowa who voted for the Respect for Marriage Act on Tuesday. Rep. Cindy Axne (D-IA) also voted yes; Rep. Randy Feenstra (R-IA) voted no. In a tweet, Hinson said it was time for Democrats to move on and focus on the issues most important to midterm election voters.

“I voted for the Respect for Marriage Act, legislation that respects and maintains settled law. Now, Democrats need to focus on policies that will help working families: lowering costs for groceries & gas, securing our border to keep our communities safe & getting our economy working again,” the freshman Iowa Republican said.

Twenty years ago, or even a decade ago, supporting same-sex marriage was a dicey proposition for politicians in both parties. Republicans, the party that more reflexively opposed same-sex marriage, often gained a political advantage from doing so. But times have changed. As the party that broadly supports marriage rights for same-sex couples, Democrats are now in a better political position on this issue. It has the potential to divide Republicans and, if not boost the Democrats’ prospects in 2022, certainly provide them with an edge in the 2024 presidential election.

That’s why the Senate vote on the Respect for Marriage Act is so fascinating.

With 10 Republican votes, the United States might, for all intents and purposes, close the book on the debate over expanding marriage rights to same-sex couples (should Obergefell ever be overturned, the Respect for Marriage Act would mandate all states to recognize same-sex marriages performed in states where such unions are legal).

The ramifications for same-sex couples and their families are, of course, intensely personal
and carry great social significance. But politically, Republicans have an opportunity to take this issue off the table and deny the Democrats a weapon to use against them in future campaigns. And they would even be able to claim some credit for doing so. Some Republican operatives say that in the year 2022, the move, from the standpoint of effective political strategy, is a complete no-brainer.

“It’s a far easier vote, with less downside and more upside, than the gun bill they just passed,” said a Republican lobbyist in reference to the bipartisan gun safety legislation that recently cleared the Senate with 15 GOP votes and McConnell’s blessing. “In a vacuum, maybe you just blame Democrats for fearmongering and playing politics. But the Thomas concurrence put them in a tough spot made worse if they vote this down.”

McConnell, reports Josh Kraushaar of Axios, made a “surprise appearance” at a fundraiser O’Dea held in Washington and promised his full support. “I just want to assure everybody, we’re going to be all-in in Colorado,” the Senate minority leader assured O’Dea and the assembled crowd. “I wanted to dispel any notion that you may have that we’re not going to play in Colorado.” McConnell added, “We can win this race.”

Republican insiders are high on O’Dea, who defeated Ron Hanks, who is aligned with former President Donald Trump, in the Colorado GOP Senate primary. Needless to say, McConnell would not have touched this race had Hanks won. But with O’Dea, a wealthy businessman who is positioning himself as a centrist, Republicans believe the building red electoral wave has made Bennet vulnerable, even in a reliably Democratic state such as Colorado.

Should Republicans stretch the Senate map this election cycle, the Rocky Mountain State is the first upset special they’ll be looking for on Nov. 8.

Money chase. Warnings that Republicans threaten American democracy are a regular part of the Democratic Party’s midterm election messaging, a nod to Trump’s ultimately failed efforts to overturn President Joe Biden’s 2020 victory that received substantial assistance from scores of House Republicans and some GOP officials in the states. However, according to fresh reporting from Open Secrets, a fundraising watchdog, it turns out that political groups and nonprofit organizations aligned with the Democratic Party have so far spent $44 million on advertising campaigns across five states (California, Colorado, Pennsylvania, Illinois, and Maryland) to boost Trump-aligned Republicans who generally support his unsupported claims that the 2020 election was stolen. Why? Because they are considered completely unelectable in the general election versus the Republican centrists they defeated in the primary.

Politically, this is a sensible strategy on the part of the Democrats. But it’s also true that this strategy undermines the Democrats’ message that Republicans threaten America’s democracy. Additionally, with a GOP electoral wave developing, some of these Republicans might inadvertently win in November, and if the Democrats are actually right about them threatening democracy, they will share in the blame for electing them.

Cotton, who recently returned from Iowa, the host of the first contest on the GOP’s presidential nominating calendar, is headed to the “first in the nation” primary state in mid-August to headline a golf tournament fundraiser for the New Hampshire Republican Party. The Granite State hosts the second nominating contest on the GOP’s presidential calendar, but its first traditional primary. Trump revealed in recent days that he is likely to run for president in 2024, telling New York magazine the only decision left to make is whether to launch his third White House bid before or after this year’s midterm elections. It’s unclear if Cotton, 45, would move ahead with a presumed presidential bid if Trump runs or if the senator will wait for 2028.

But in the meantime, he’s among the most aggressive of his party’s presidential contenders when it comes to planning and traveling to the key early primary and caucus states as he gears up for a White House run.