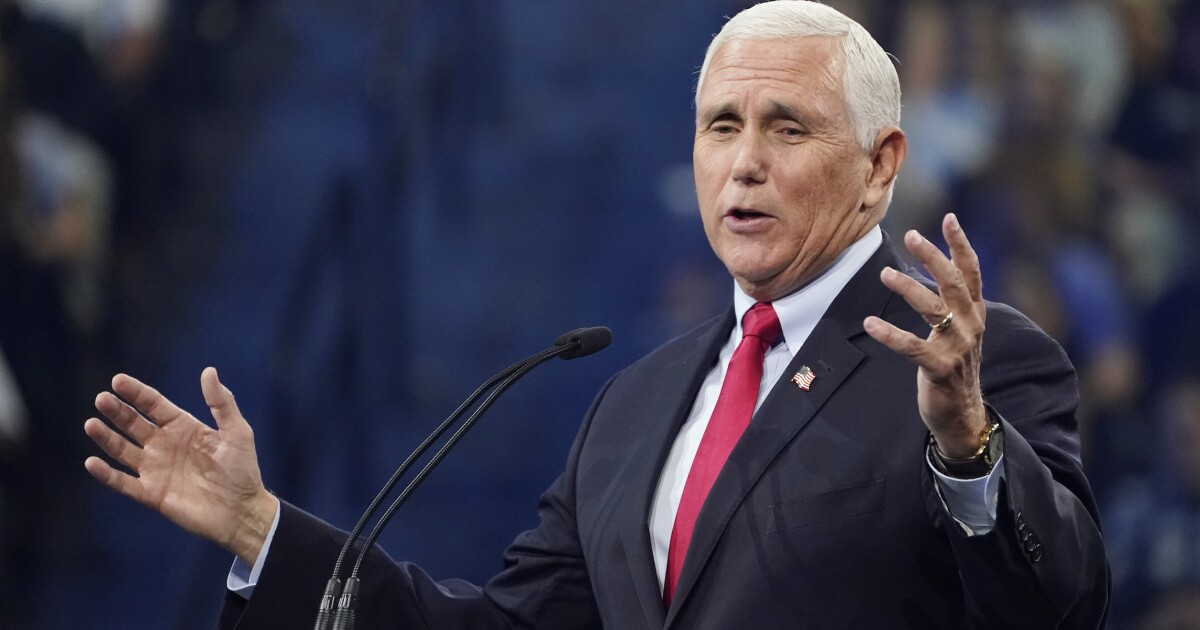 Former Vice President Mike Pence was back in Washington, D.C. on Wednesday, predicting the GOP will take over Congress in the midterms in a speech at the Heritage Foundation.

Pence, who is a rumored 2024 presidential candidate, mostly took up policy issues including the “Freedom Agenda” which aims to oppose liberal priorities and maximize individual liberty, though he began by saying Republicans would win both the House and Senate in November.

“Help is on the way,” said Pence to an overflow crowd. “We are 20 days away from the beginning of the great American comeback.”

Pence described himself as a Christian, a conservative, and a Republican in that order, and then proceeded to outline how liberal policies have created the border crisis, high inflation, high gas prices, and schools that have been transformed into “indoctrination centers.”

The former vice president now resides in Indiana but has been active in politics since leaving office early last year. His nonprofit group has been airing ads aimed at unseating vulnerable House Democrats, and he has publicly urged Republicans not to back down from the issue of abortion.

Pence hasn’t shied away from confronting Trump-aligned candidates on the campaign trail. He is stumping for Rep. David Valadao, a Republican from California who voted to impeach Trump for his involvement in the Jan. 6 attack on the U.S. Capitol in 2021. Pence also campaigned in the spring for Gov. Brian Kemp (R-GA) who was challenged by former Sen. David Perdue (R-GA) because he didn’t go along with Trump’s 2020 election challenges. He has visited 32 states in the last year.

However, Pence shied away from confronting Trump directly during the speech, repeatedly mentioning how the “Trump/Pence administration” implemented Heritage Foundation policies and even used the tagline “Make America Great Again.”

The policy portion of Pence’s speech focused on the Freedom Agenda, which was originally released in April 2021 to “preserve American culture, restore American strength, and return America to prosperity.”

Pence argued it’s important for conservatives to not just oppose Democrats, but to push their own ideas as well, with a greater focus on the future than the past. He described the Heritage Foundation as a factory of ideas with a positive vision for the country.

He then outlined debates within the conservative movement between Reagan conservatives and populists but argued the two can coexist.

“We don’t have to choose between one at the expense of the other,” Pence said, adding that the Trump/Pence administration was a marriage of a conservative agenda and populist priorities.

Abortion was a big theme and drew some of the loudest applause from the audience. Pence also spoke about the importance of border security, free trade, and the threat China poses to American security and prosperity.

Pence called out President Joe Biden’s plans to sign an abortion bill on the first day of the new Congress, saying it isn’t going to happen.

“I’ve got a news flash for Joe Biden,” he said. “On Jan. 2, we’re going to have pro-life majorities in the House and the Senate, and we’re going to be taking the case for life to every state in America.”

On education, Pence pushed the idea of slashing the federal government’s role in public schools, and also described critical race theory as nothing more than “state-sponsored racism.”

The economy will be the biggest factor in the midterms, Pence predicted, mentioning that the unemployment rate for black and Hispanic Americans was at its lowest point in history while he and Trump ran the White House.

“There can be no room in the conservative movement for apologists for Putin,” he said, adding that a rising chorus of Republicans would have the U.S. disengage with the wider world, but that “appeasement has never worked.”

“Men and women of the Heritage Foundation,” Pence concluded, “that’s the Freedom Agenda.”