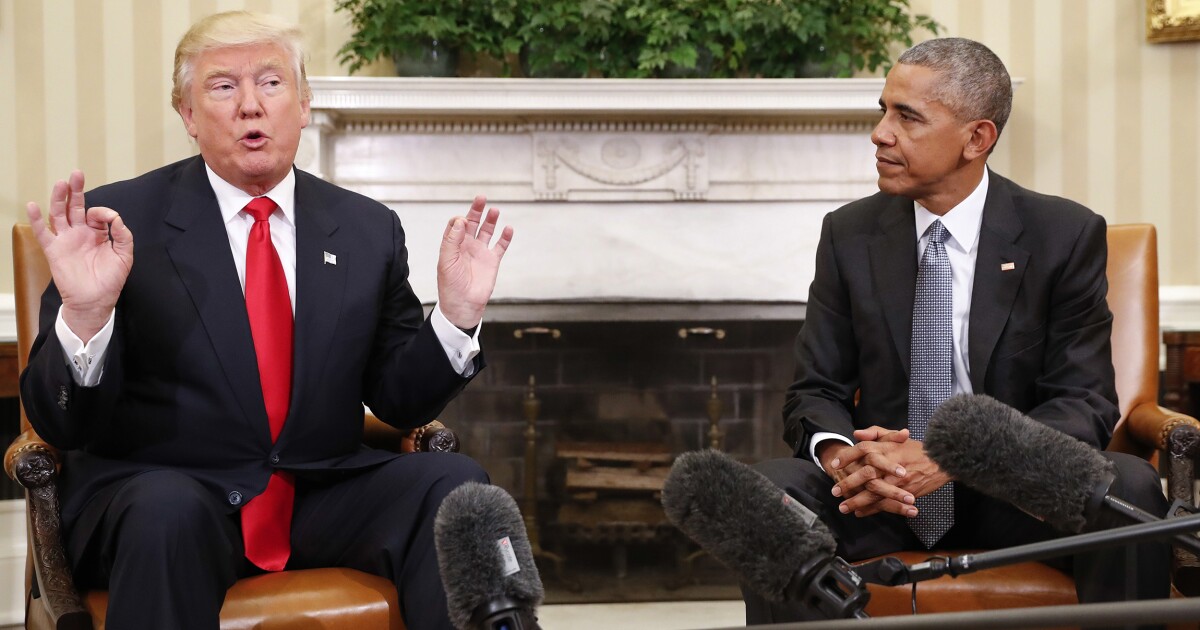 The National Archives and Records Administration pushed back on former President Donald Trump’s assertions that his predecessor, Barack Obama, had taken classified documents from the White House as he faces intense scrutiny over records he possessed after federal officials raided his Florida home.

After the FBI reportedly seized 11 sets of classified documents from Trump’s Mar-a-Lago residence in a raid on Monday, Trump decried the search as being politically motivated and insisted Obama had taken “30 million pages of documents” when he left office in 2017, a claim which the NARA responded to on Friday, noting it maintains “exclusive legal and physical custody” of Obama’s records.

TRUMP PUSHES BACK ON MAR-A-LAGO RAID, CLAIMS DOCUMENTS WERE ‘DECLASSIFIED’

“NARA moved approximately 30 million pages of unclassified records to a NARA facility in the Chicago area, where they are maintained exclusively by NARA,” the agency said in a statement. “Additionally, NARA maintains the classified Obama Presidential records in a NARA facility in the Washington, DC, area. As required by the [Presidential Records Act], former President Obama has no control over where and how NARA stores the Presidential records of his Administration.”

Trump’s claims that Obama had also unlawfully stored presidential records is just one of several defenses the former president has sought to use over the last several days. He has also claimed he had “declassified” all the records that were recovered from his Mar-a-Lago home.

“Number one, it was all declassified. Number two, they didn’t need to ‘seize’ anything,” Trump wrote in a post on his social media platform Truth Social. “They could have had it anytime they wanted without playing politics and breaking into Mar-a-Lago. It was in secured storage, with an additional lock put on as per their request…”

The Presidential Records Act mandates public ownership of all presidential records, and must be preserved by each administration. When it comes to the classified documents, Trump’s lawyers argued the former president used his authority to declassify the information he took with him when he left office. Although a president has the power to do so, it’s not clear if Trump went through the appropriate process to declassify the documents.

The response from NARA comes just hours after it was revealed FBI agents recovered 11 sets of classified information, with some marked as top secret, during its Monday raid. FBI agents who conducted the search recovered 20 boxes of items in their Monday search, including handwritten notes, binders full of photos, and the executive grant of clemency given to Trump ally Roger Stone, according to a review of the inventory by the Wall Street Journal.

The details of the search warrant itself have not been publicly disclosed, making it unclear what kind of information agents thought was taken from the White House and being held at Trump’s Mar-a-Lago residence. However, the unprecedented search, including for nuclear weapons documents, has prompted experts to believe there were deep concerns that the sensitive information could fall into the wrong hands, according to the Washington Post.

Attorney General Merrick Garland addressed the raid for the first time on Thursday, declining to disclose details of the search but confirming he had personally authorized it.

Just moments before Garland addressed the nation, the Department of Justice filed a motion to unseal the search warrant, with the motion arguing there is a “clear and powerful interest in understanding what occurred under these circumstances.”

“That said, the former President should have an opportunity to respond to this Motion and lodge objections, including with regards to any ‘legitimate privacy interests’ or the potential for other ‘injury’ if these materials are made public,” the filing stated.

Trump said he would not oppose the release of documents related to the FBI’s search warrant, calling the raid an “unprecedented political weaponization of law enforcement” in a statement on Thursday. The documents are expected to be released as early as Friday.