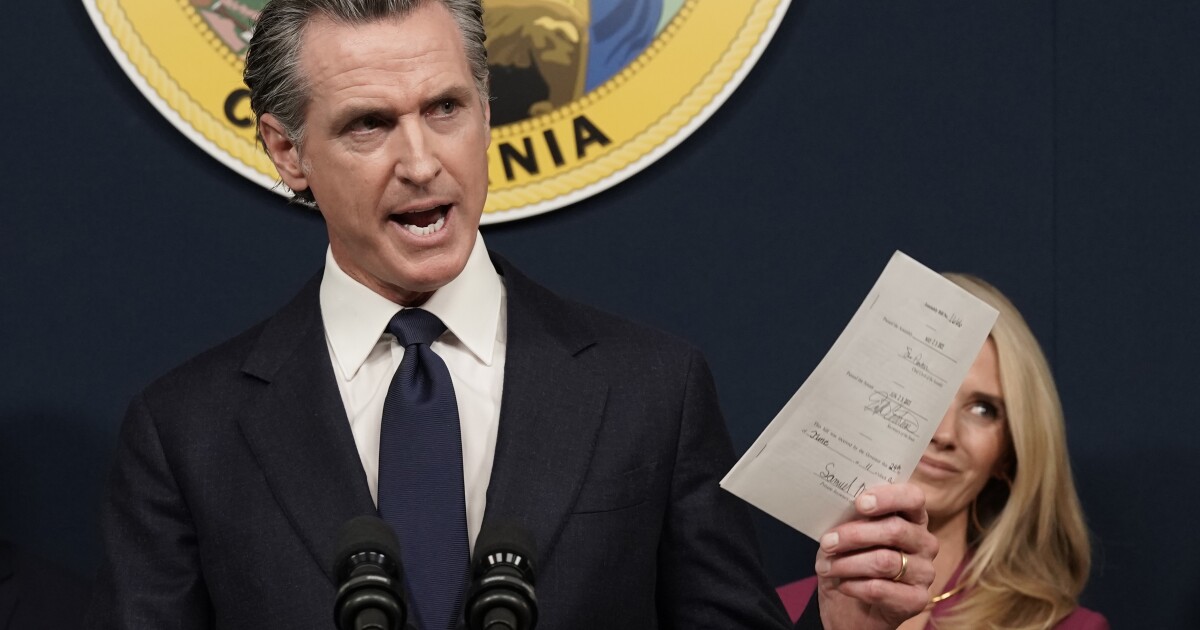 Newsom took out ads in three Texas newspapers juxtaposing the records of Abbott’s Lone Star State and California on policies such as reproductive rights and public safety.

“Our creators endowed us with the right to life. And yet … children lose their right to life every year because of abortion. In Texas, we work to save those lives,” a quote credited to Abbott said in the ad.

The word “abortion” was swapped with “gun violence,” and “Texas” was crossed out and switched with “California” in the ad. The ad was set to run in Austin American-Statesman, Houston Chronicle, and El Paso Times, according to NBC.

“If Texas can ban abortion and endanger lives, California can ban deadly weapons of war and save lives. If Governor Abbott truly wants to protect the right to life, we urge him to follow California’s lead,” the ad proclaimed at the bottom.

Newsom recently signed SB 1327, a law that enables Californians to sue other citizens for brandishing unregistered “ghost guns” or other illegal firearms, modeled off a Texas abortion law that enables Texans to sue providers of abortions that came after a fetal heartbeat was detected, which are prohibited under state law.

Today, the CA Gov is signing a bill that gives Californians the right to sue those making illegal guns.

The concept is based off TX’s law that allows private citizens to sue over abortions. pic.twitter.com/arfp4Ch27g

He used a similar tactic in Florida, taking out ads in the Sunshine State bashing Gov. Ron DeSantis, a rising GOP star and widely speculated 2024 hopeful, for legislation that restricts classroom discussion of gender identity and sexual orientation with children from kindergarten through third grade.

“I urge all of you who live in Florida to join the fight, or join us in California, where we still believe in freedom, freedom of speech, freedom to choose, freedom from hate, and the freedom to love,” Newsom declared in the ad.

Newsom has been going on offense against high-profile members of the GOP in recent weeks, seemingly to depose the prevailing Republican narrative that thousands are fleeing a crime-ridden, unaffordable, and overly regulated California for states such as Florida and Texas. Seizing on Republican-backed legislation restricting abortion or “wokeness” in classrooms, Newsom appears eager to rebrand California as the state of freedom while castigating red states as devoid of critical liberties.

With many whispers of unease among Democrats about President Joe Biden in 2024 growing louder, Newsom is seemingly fueling speculation that he is a viable alternative. In recent weeks, Newsom has scored national attention for legislation aimed at combating inflation, expanding abortion access, cracking down on guns, and more — key topics for Democratic voters.