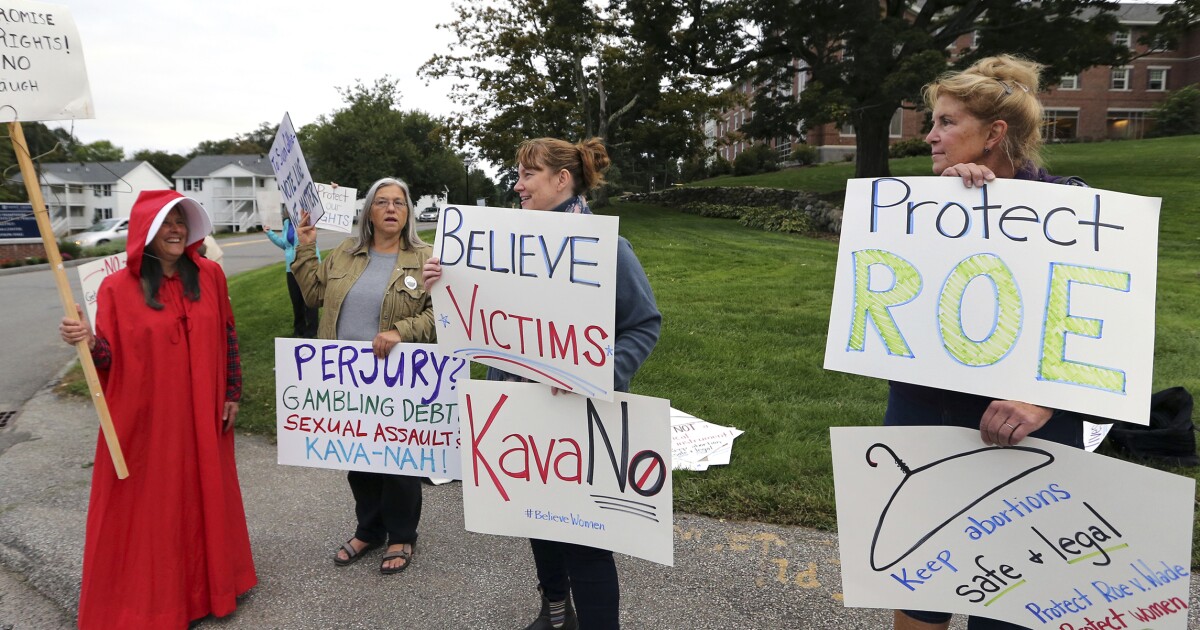 A plea from the Supreme Court marshal to prohibit pro-abortion rights picketing outside the homes of justices got a lukewarm reception from certain Virginia and Maryland officials.

The high court’s chief security officer, Marshal Gail Curley, sent four letters on Friday to Maryland Gov. Larry Hogan, a Republican, Virginia Gov. Glenn Youngkin, a Republican, Montgomery County Executive Marc Elrich, and Fairfax County Board of Supervisors Chairman Jeffrey McKay saying that “threatening activity” has persisted outside the homes of justices in both Maryland and Virginia since May.

“Since then, protest activity at justices’ homes, as well as threatening activity, has only increased,” Curley said in the letter, noting that large groups were using bullhorns and banging drums. “This is exactly the kind of conduct that Maryland and Montgomery County laws prohibit.”

Curley, who is also responsible for investigating the May 2 leaked draft opinion that signaled the court’s now-solidified intentions to overturn abortion access under Roe v. Wade, was met with mixed responses from Elrich and McKay.

“It is very troubling that the Court would take this approach,” Elrich said in a statement. “If the Marshal is concerned about security, then she and her staff should communicate directly with our police chief, myself, and my staff rather than having a letter released to the press.”

Elrich said he has spoken with Montgomery County Police Chief Marcus Jones and noted that he was not aware of any need for additional security assistance as of Monday, adding that discussing security concerns via public letters is “irresponsible and disappointing behavior.”

Justice Brett Kavanaugh‘s residence is located in Chevy Chase, Maryland, and was an alleged target of an apparent assassination attempt on the justice’s home last month when an armed suspect was arrested on charges of attempted murder.

Curley detailed in her letters that demonstrations last week amounted to 75 protesters “loudly picketed at one justice’s home in Maryland for 20-30 minutes in the evening, then proceeded to picket at another justice’s home for 30 minutes, where the crowd grew to 100, and finally returned to the first justice’s home to picket for another 20 minutes.”

Hogan was receptive to Curley’s request but said it’s up to the federal government and the Justice Department to “enforce the clear and unambiguous federal statutes on the books that prohibit picketing at judges’ residences.” He added that he was “deeply concerned” about the dozens of protesters picketing outside the homes of justices in his state.

Fairfax County officials maintained a similar stance to Montgomery County’s response to the letter. “The law cited in the letter is a likely violation of the First Amendment, and a previous court case refused to enforce it,” McKay said in a joint statement with the Fairfax County Police Department.

“As long as individuals are assembling on public property and not blocking access to private residences, they are permitted to be there,” the statement added.

A spokesperson for Youngkin said the Virginia governor “agrees with the Marshal” that threatening activity has increased outside of the justices’ homes and “welcomes the Marshal of the Supreme Court’s request for Fairfax County to enforce state law as they are the primary enforcement authority for the state statute.” The spokesperson added that the governor has made the same request for McKay.

Following the leak of the draft opinion in May, the Department of Homeland Security issued a memo regarding threats to Supreme Court members, adding that the court’s police have noticed a major uptick in social media threats of violence.

In response to growing pressure from Republicans in Congress, Attorney General Merrick Garland said last month that the DOJ was taking the threats against Supreme Court justices “extraordinarily seriously.”

The leaked draft opinion prompted immediate protests outside the high court. Officials ordered an unscalable fence outside the building even though the court will not resume session until October.

The marshal’s letters were dated Friday, July 1, and were shared with reporters by a Supreme Court spokesperson on Saturday.