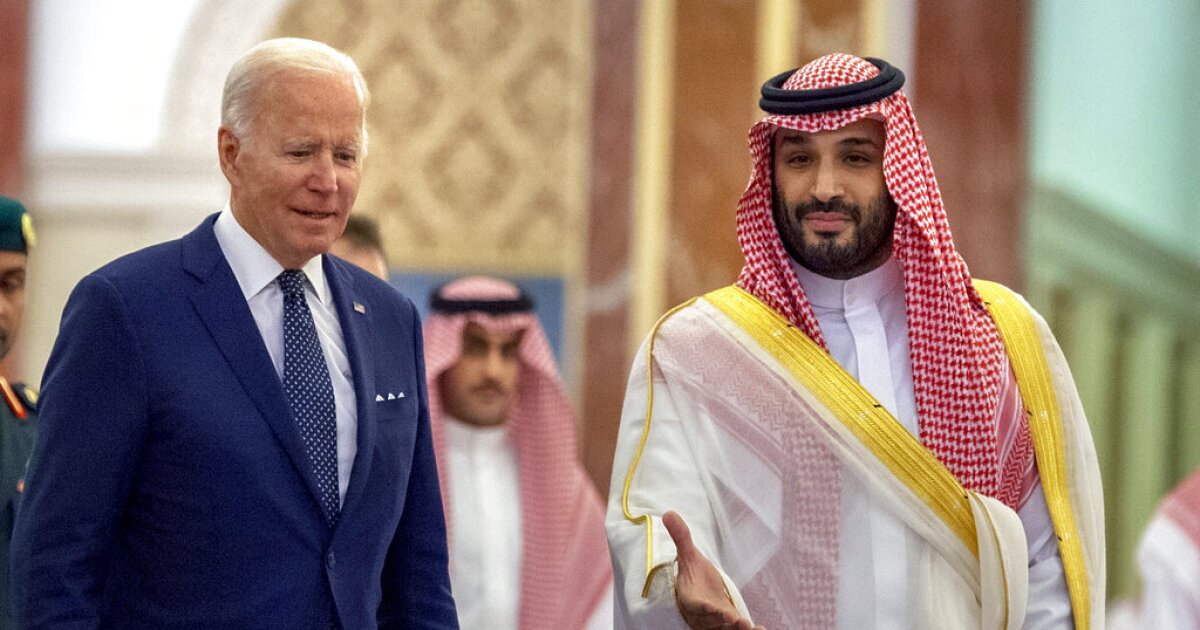 At stake was the potential for Saudi Arabia to boost its oil output and ease political pressure on Biden, who had once vowed to punish the kingdom.

But the first test of Biden’s visit will come Wednesday when the OPEC+ consortium of oil producers meets to discuss new production targets.

One question is whether Saudi and other producers have sufficient spare capacity, said Brenda Shaffer, a senior adviser for energy at the Foundation for Defense of Democracies. “And even if they do, are they willing to use it?”

Economic headwinds could dent that outlook, as leaders worry about boosting supply before a downturn.

“Everyone reads the newspaper and understands that we’re on the eve of a global recession, and we’re not going to need extra oil,” Shaffer told the Washington Examiner.

Concerns of a downturn have grown as the global economy contracts and central banks hike interest rates to fight soaring inflation.

In the United States, two straight quarters of economic decline have stoked fears that the country has entered a technical recession despite strong job growth and other economic factors.

In China, manufacturing has contracted, while repeated lockdowns have disrupted supply chains.

Shaffer said rather than promising to pump more oil, OPEC+ members could draw instead on stored capacity.

“The looming recession is enough to keep them at some sort of polite compromise, like pulling more oil out of storage versus actually revving up a new production,” she said.

Any market effect is likely to be smaller, however.

“Only new production can moderate the price,” Shaffer added.

Saudi Arabia and the United Arab Emirates have already sought to temper expectations, including during Biden’s stop in Jeddah.

And not long before, French President Emmanuel Macron was overheard at the G-7 summit telling Biden that Sheikh Mohammed bin Zayed had confided in him that the Emirates and Saudi Arabia were closing in on their production limit.

Gasoline prices in the U.S. have fallen in recent weeks from a high of more than $5 per gallon on average in June. According to AAA data, the average national gas price in the U.S. is now $4.19, up from an average of $3.17 per gallon one year ago.

Oil futures rose on Tuesday amid concerns that OPEC+ producers may forgo an announcement to increase production when the group meets on Aug. 3.

Earlier in the week, OPEC’s new secretary general said Russia’s membership in OPEC+ is essential, according to an interview with Haitham al Ghais, Kuwait’s former OPEC governor and the new OPEC+ head, in Kuwait’s Alrai newspaper and reported by Reuters. Al Ghais will chair his first OPEC+ meeting on Wednesday to discuss its future production quotas.

Calling the market conditions “very volatile and turbulent,” al Ghais told Alrai that the consortium is closely attuned to supply. U.S. and European leaders have pressed the group’s members to increase production to help bring prices down, which have surged as Western countries try to wean themselves off Russian oil.

But al Ghais said prices began rising before Russia invaded Ukraine “due to the prevailing perception in the markets that there is a shortage of spare production capacity, which has become confined to a few and limited countries.”

“OPEC doesn’t control oil prices, but it practices what is called tuning the markets in terms of supply and demand,” al Ghais said, describing the current state of the oil market as “very volatile and turbulent.”

Saudi officials have likewise indicated that production outputs won’t be swayed by outside pressure.

“We are a long-term producer of energy,” said Adel al Jubeir, the Saudi minister of state for foreign affairs, two weeks ago in Jeddah. “If there’s too much supply, we remove it. If there’s not enough supply, we increase it.”

He continued: “We base that on fundamentals — not on speculation, not on hysteria, not on geopolitics.”

Though Biden teased the prospect of a boost from the Gulf last month, the president and White House officials, wary of sensitivities, have otherwise sought to downplay expectations for an increase in Saudi and UAE oil outputs.

The Biden administration has declined to speculate on the outcome of the meeting, with John Kirby, the National Security Council’s strategic communications coordinator, telling reporters Tuesday that the White House “won’t get ahead of the Saudis or OPEC.”

“We had good discussions with them on energy security, but this is a decision that OPEC has to make,” Kirby added.