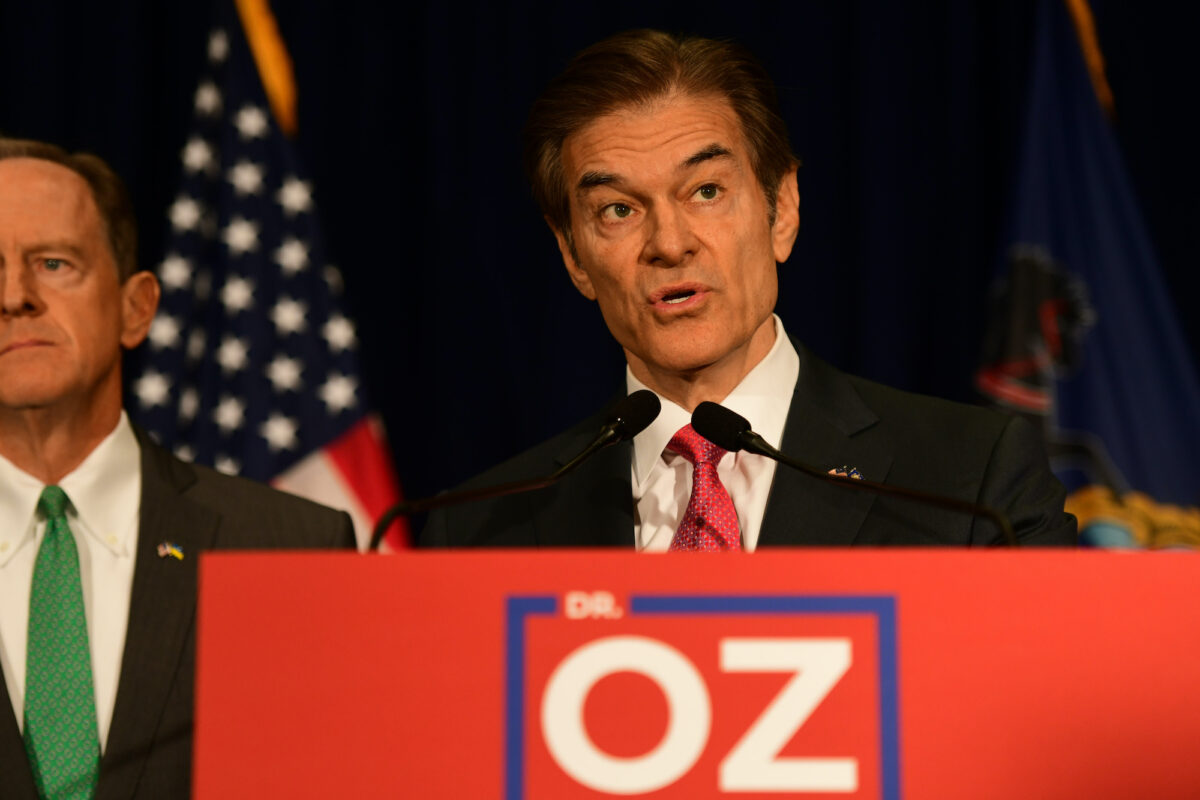 One of the most anticipated events leading up to Election Day on Nov. 8 will unfold tonight when Democrat John Fetterman and Republican Mehmet Oz take the stage in Harrisburg, Pennsylvania, for their only scheduled debate.

The candidates are vying to replace retiring Pennsylvania Republican Sen. Pat Toomey in a race that will help determine which party has control of the chamber in 2023.

Fetterman suffered a severe stroke days before the May primary and cast his vote from a hospital bed. Since then, he has made limited public appearances and conducted a handful of media interviews.

Fetterman made his first public appearance since his stroke on Aug. 12. Oz immediately challenged him to appear on the debate stage. Oz asked for five debates from Sept. 6 to Oct. 5. Fetterman eventually agreed to one on Oct. 25, two weeks before election day. Early voting started in Pennsylvania on Sept. 19.

During the debate in Harrisburg, Fetterman is expected to use closed captioning, which he has relied on in interviews and public appearances as he continued to recover.

According to recent polls, the race is tightly contested and within the margin of error. The high-stakes debate could be a decisive moment in a contentious campaign.

“I have not spoken to a Democrat in Pennsylvania or in Washington, D.C., who is not concerned about the debate,” a senior Democrat strategist from Pennsylvania told Reuters.

A Fetterman campaign spokesperson also expressed apprehension about the forum.

“Even before the stroke, John was not a great debater. Meanwhile, Oz is a showman who spent years in front of a camera, so we know what we are up against,” the Fetterman spokesperson said.

Oz will likely discuss his plans for fighting crime and talk about Fetterman’s progressive record on criminal justice reform.  On Oct. 24, Oz announced a six-point plan to fight crime. The highlights, according to a press release, include stopping drug crimes, smart sentencing reform, increasing resources for safer streets, prosecuting crime, relief for victims and users, and reducing crime in prisons.

As Pennsylvania’s lieutenant governor, Fetterman heads the Board of Pardons.

Fetterman has bragged that he “conferred more pardons in Pennsylvania than any administration in history” while also saying that one-third of the prisoners in Pennsylvania state prisons could be released and “we wouldn’t be any less safe.”

Last week, Jahmir Harris surrendered to police in connection to a Philadelphia shooting that killed 50-year-old Charles Gossett after security footage showed he was the alleged getaway driver.

Harris served eight years in prison for a 2012 first-degree murder before he was exonerated and released last year by Philadelphia’s “Conviction Integrity Unit,” which is led by progressive district attorney Larry Krasner.

Fetterman has praised the unit for being “crucial” and “truly groundbreaking.”

In 2021, Fetterman endorsed Krasner, who is facing impeachment as a Pennsylvania House investigates his prosecutorial policies in a city afflicted with rampant crime.

Fetterman has declined to comment on Krasner’s current issues. In May 2021, he tweeted, “[Krasner’s] unwavering commitment to systemic criminal justice reform was resoundingly affirmed with a true mandate. His efforts have literally saved the innocent from dying in prison.

“His Conviction Integrity Unit model should be mandatory in all of PA’s 67 counties,” Fetterman added.

Fetterman is endorsed by Brand New Congress and Reclaim Philadelphia. Both groups have called for defunding the police.

Recently, he told reporters that, “I think we need to be having a better relationship with the police. And making sure that the police feel they feel supported by the DA.”

In an interview with Fox & Friends last weekend, Oz addressed the Harris case and hinted at what would be discussed in the debate.

“If you walk through the streets of Philadelphia and most of the large cities in Pennsylvania, it’s the same story,” Oz said. “People feel like the folks in charge value the criminals more than the innocent. The families are in pain. No one seems to care.

“The fact that Jamir Harris could have been released from prison by this Conviction Integrity Unit, which sounds Orwellian, is shocking to me, and it is to everybody else. But only days ago, John Fetterman praised it, and talked about how it was groundbreaking. It was a beacon of light,” Oz added. “He actually said we should have similar mandatory programs in all the counties of Pennsylvania. The parole board that he serves. He wanted to have it do exactly what this conviction integrity unit was doing, which is go back, find people who are guilty, and get them out in the streets.”

Fetterman’s health is another topic likely to be addressed in the forum.

He has used a closed captioning system during interviews with reporters. His campaign says it helps compensate for auditory processing challenges. He will use the system on stage during the debate.

Under frequent scrutiny from Oz and multiple media outlets regarding questions about his health, Fetterman released a letter on Oct. 19 from a doctor who wrote that he “is recovering well from his stroke” and “has no work restrictions and can work full duty in public office.”

In September, the Pittsburgh Post-Gazette editorial board called on Fetterman and Oz to release their medical records in September. Oz agreed, and the results indicated that he was in “excellent health,” according to his doctor.

Fetterman had repeatedly refused to reveal medical information until the report from Chen.

The letter was released days after Fetterman stumbled over his words and used a closed-captioning monitor to read questions in an interview with NBC News reporter Dasha Burns that aired on Oct. 11.

After Chen’s letter was published, Oz’s campaign released a statement saying it was “good news that John Fetterman’s doctor gave him a clean bill of health.”

“The bad news is that John Fetterman still supports releasing convicted murderers out on the streets and has zero explanation for why he didn’t pay his taxes 67 times,” an Oz campaign spokesperson said. “And now that he apparently is healthy, he can debate for 90 minutes, start taking live questions from voters and reporters, and do a second debate now too.”

Political pundits also believe that Oz will link Fetterman to rising inflation and gas prices, and the overall cost of living increase.

On Oct. 24, Fetterman’s campaign released a statement referencing a Rolling Stone article that claims former president Donald Trump is encouraging Pennsylvania lawmakers to repeal a 2019 no-excuse mail-in voting law. The story also alleged that Trump is setting the groundwork to challenge the results of the Pennsylvania Senate race if Oz loses.

“It’s clear that Donald Trump, Dr. Oz, and the GOP will do whatever it takes to try and steal this race on Election Night. Trump has already said he ‘needs’ people like Oz in office to challenge the 2024 election,” Fetterman spokesperson Joe Calvello said in a statement. “Trump is trying to steal the 2022 election for Oz so that Trump can steal the 2024 election for himself.”

Pennsylvania is considered one of the Democrats’ top chances to at least maintain control of the Senate. The current makeup is 50-50 with Vice President Kamala Harris having the tie-breaking vote.

A victory in Pennsylvania could offset Democratic party defeats in Arizona, Georgia, and Nevada.

The 60-minute debate will be televised live and begin at 8 p.m. EST.