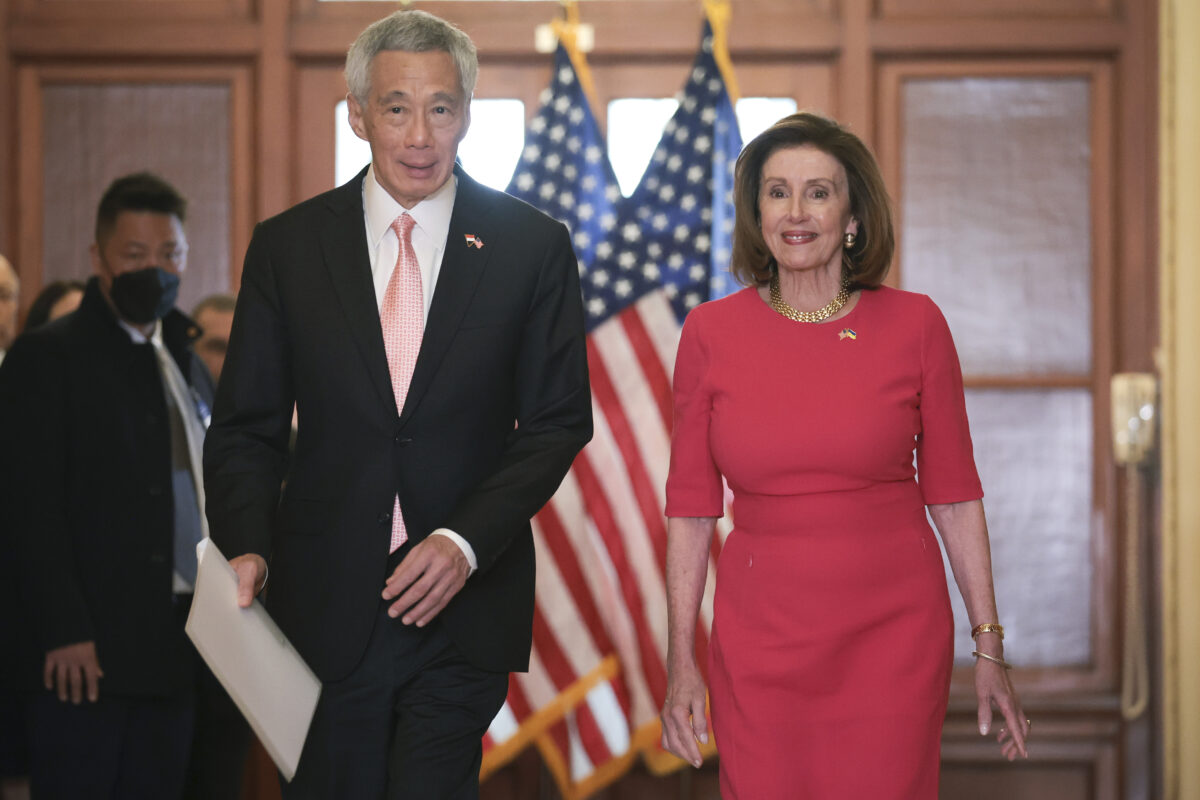 House Speaker Nancy Pelosi arrived in Taiwan August 2, in spite of continued threats of violence from the Chinese Communist Party (CCP) and its propaganda organs.

The visit comes amid a multi-national tour of southeast Asia that will also see the speaker visit Singapore, Malaysia, South Korea, and Japan.

US Unfazed by China Threats

The Speaker’s visit to Taiwan has been in the works since at least April when she was expected to visit Taipei but could not due to a last-minute case of COVID-19.

The CCP has subsequently turned the trip into something of a war drum and has issued a number of increasingly bellicose threats to Taiwan and the United States.

Similarly, China state-owned media took to social media with a long list of provocative and, at times, violent posts about the trip. Most notably urging the Chinese military to shoot down Pelosi’s plane.

“The PLA [China’s military] has the right to forcibly dispel Pelosi’s plane and the U.S. fighter jets, including firing warning shots and making tactical movement of obstruction. If ineffective, then shoot them down.”

The threats follow a trajectory of escalating rhetoric emanating from Beijing in recent months, as the CCP attempts to strong arm changes in U.S. policy without meaningful diplomatic engagement. In May, China’s defense minister went so far as to threaten that the regime would “not hesitate to start a war no matter the cost” to prevent Taiwan’s further recognition as a nation on the international stage.

U.S. leadership, for the most part, has taken the threats in stride. On Monday, White House National Security Council spokesperson John Kirby reiterated that the nation was not changing any policy regarding Taiwan.

“Put simply, there is no reason for Beijing to turn a simple visit, consistent with long-standing U.S. policy into some sort of crisis or conflict, or to use it to increase aggressive military activity in or around the Taiwan Strait,” Kirby said.

“We will not take the bait or engage in saber rattling. At the same time, we will not be intimidated. We will keep operating in the seas and skies of the western Pacific as we have for decades.”

The CCP has already begun punishing Taiwan for receiving Pelosi. The website of Taiwan’s president was hit with a cyber attack early in the week. That attack, meanwhile, was followed by a Chinese import ban on more than 100 Taiwanese food and agriculture firms.

Despite the rhetoric and willingness to do harm, however, leaders from both Taiwan and the United States expressed solidarity in not caving to CCP demands.

“What kind of message would it send to other leaders of the free world if the Speaker of a major country’s legislative branch cancelled an unannounced trip to Taiwan because the PRC has threatened to use force against freedom-loving people on this beautiful island?” said Wang Ting-yu, a Taiwanese MP, in a tweet.

“We have been clear from the very beginning that she [Pelosi] will make her own decisions and that Congress is an independent branch of government,” Kirby said. “Our Constitution embeds a separation of powers.”

“This is well known to the PRC, given our more than four decades of diplomatic relations. The Speaker has the right to visit Taiwan, and a Speaker of the House has visited Taiwan before without incident, as have many members of Congress, including this year.”

There were rumors that Pelosi was aboard a U.S. Air Force aircraft, SPAR19, which flew out of Malaysia Tuesday with no listed destination. The destination of the aircraft was updated to Taipei as it passed the Philippines.

The plane caught the attention of anxious China-watchers, who flocked in the hundreds of thousands to track the aircraft. Flightradar24, a popular aircraft-tracking website, announced that the “unprecedented” interest in the aircraft caused a strain on its servers, temporarily making the website unavailable.

“It is commonplace for the Speaker to travel aboard a U.S. military transport aircraft,” said White House National Security Council spokesperson John Kirby during a press briefing on Aug. 1. “That’s very typical.”

“Part of our responsibility is to make sure that she can travel safely and securely and I can assure you that she will.”

It is normal for sitting members of Congress to visit Taipei, and such has happened multiple times this year. The last time a sitting Speaker visited Taiwan, however, was in 1997.

Both the United States and China have subsequently maneuvered military assets into the region around Taiwan, belying the sense of tension felt by both nations.

Many experts believe that the CCP’s threats are hollow, and intended to do no more than affect U.S. policy without having to actually use diplomacy. Still, the White House warned that such situations can all too easily lead to miscommunication and catastrophic incidents.

“It’s not so much that there may be a direct attack, but it raises the stakes of miscalculation and confusion which could also lead to unintended consequences,” Kirby said Monday.

Kirby added that the United States would be on the lookout for increased military provocations from the CCP, including air and naval activities and missile launches.

He said there was a possibility that the CCP would repeat its actions from 1995 and 1996, when it launched missiles into the waters around Taiwan after it was announced Taiwan’s president would visit his alma mater in the United States.

Chinese communist authorities have made a series of sweeping and bellicose threats toward the United States in an effort to deter Pelosi’s trip from happening, and it is unclear how far the regime can go with its rhetoric without losing face internationally.

Chinese leadership fears that such trips will increase the ties between Taiwan and the United States and further legitimize Taiwan as an independent nation.

The CCP claims that Taiwan is a breakaway province that must be united with the mainland, by force if necessary. Taiwan has been self-governed since 1949, has never been under CCP control, and boasts a thriving democratic government and market economy.