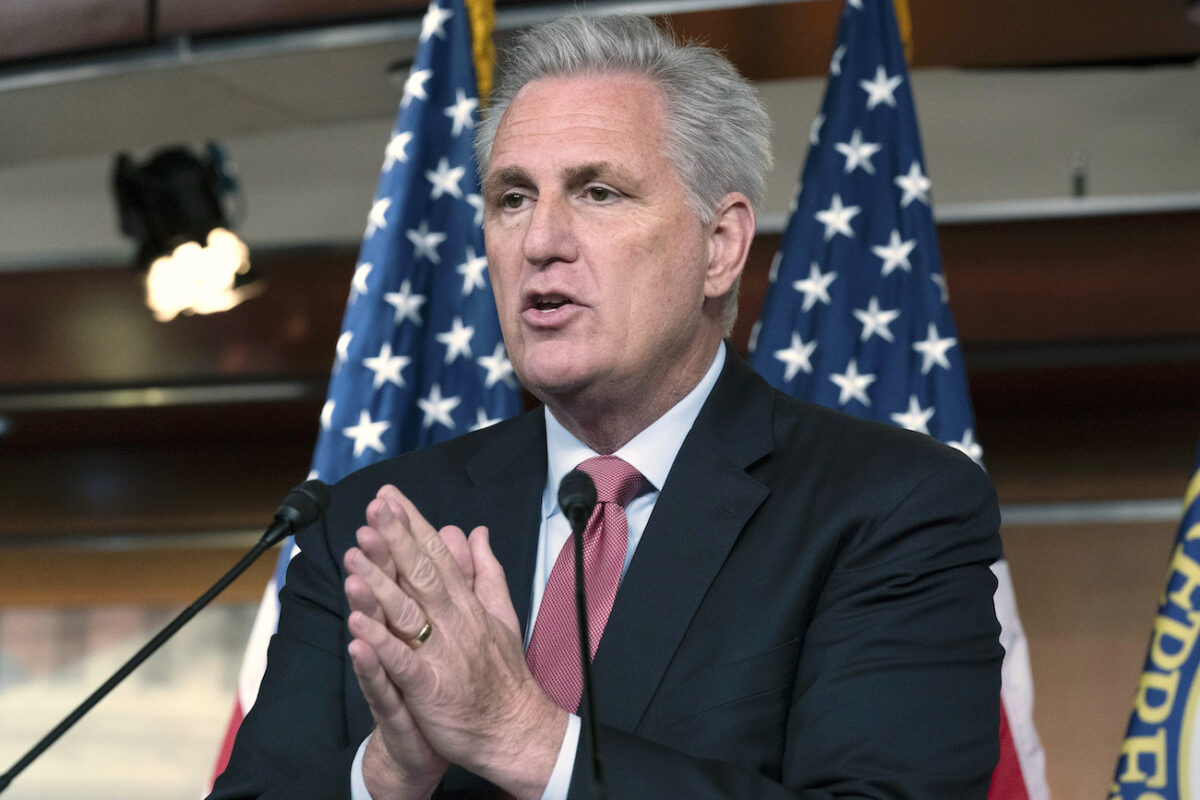 During a weekly briefing on Friday, House Minority Leader Kevin McCarthy (R-Calif.) said it was wrong that Paul Pelosi, husband of House Speaker Nancy Pelosi (D-Calif.), was allowed to sell his shares of a computer chip manufacturer just before the House voted on a chips manufacturing bill.

The news broke under required financial disclosure laws that Paul Pelosi had sold $4.1 million dollars worth of NVIDIA Corp. shares on July 26.

The sale, which resulted in a financial loss of over $340,000 for the Pelosis, was the end result of scrutiny by critics, who saw a conflict of interest in Paul Pelosi owning the stocks.

This is far from the first time the Pelosis have been in the limelight for trading related to ongoing legislative deliberations.

Though she has in the past opposed efforts to ban stock trading by members of Congress, Nancy Pelosi recently indicated she intends to move forward with a bill to ban some types of trading by lawmakers.

During his weekly briefing, McCarthy suggested doubts about the timing of the bill, in view of the speaker’s past opposition.

“I find it very ironic that the speaker of the House now talks about bringing up a bill at the very end of the term of Congress,” McCarthy said when asked about whether he would support the trading ban bill. “So her husband could trade all the way through but now it becomes a crisis?”

“I think what her husband did was wrong,” he said.

The Pelosis have long maintained that they don’t discuss Paul Pelosi’s financial trades, but McCarthy suggested he strongly doubts that Paul Pelosi is unaware of his wife’s legislative work.

McCarthy said he was sure the speaker often had phone conversations with colleagues about the details of certain bills, including when the Pelosis were traveling together overseas.

“I’m sure she had those conversations,” McCarthy reiterated, adding, “I don’t know if [Paul] was able to hear ’em or not.”

McCarthy said it was important to bring trust back to the institution of the House and to investigate what the rules should be for members of Congress with regard to stock trading.

“I don’t think that the proper way to do this is Nancy Pelosi writing the bill, because we have proven that she shouldn’t do that,” he said.

“This should be a bipartisan matter,” McCarthy said, continuing, “We should look at it through committee, and this is something we’ll do in the majority: putting new rules forward … to make sure you have trust in this House and knowing that people are not investing in a place where they have influence.”

Asked whether he would commit to not discussing legislation with his spouse if he became speaker, McCarthy said he would, noting that he and his wife only own mutual funds rather than individual stocks.

McCarthy didn’t commit to advancing a bill about blocking members from trading stocks, but he said lawmakers would be looking into the problem.

While far from a commitment, McCarthy’s comments indicate that Republicans are open to congressional stock trading reform.

U.S. law forbids people with insider information, including members of Congress, from buying stocks on the basis of that information, and those who break these laws can be subject to criminal prosecution.

Most critically, the law began requiring members of Congress to disclose, publicly and quickly, trades made by themselves, their spouses, or their dependent children.

Insider’s report found that a large, bipartisan swath of 49 members in both chambers had violated these laws. These include, among many others, well-known names such as Sens. Dianne Feinstein (D-Calif.) and Tommy Tuberville (R-Ala.) and House Reps. Debbie Wasserman Schultz (D-Fla.) and Dan Crenshaw (R-Texas).

In light of this report, Speaker Pelosi—who has almost unilateral control over what makes it to the House floor for a vote—was asked by a reporter whether members of Congress should be barred from stock trades, and she quickly defended the practice of members of Congress trading in the stock market.

“No,” Pelosi said. “We have a responsibility to report [our trades] … [and] if people aren’t reporting, they should be.”

Pressed to explain her “no,” Pelosi said: “Because we’re a free market economy. [Members of Congress] should be able to participate in that.”

Her recent moves to advance a congressional trading ban seem to be a sharp departure from this earlier position.

In January, a bipartisan coalition of lawmakers came together to demand a vote on legislation that would ban members of Congress from trading individual stocks, but that measure hasn’t advanced.

“The law prohibits only those stock trades that members of Congress make or direct because of their nonpublic knowledge,” Rep. Jared Golden (D-Maine), who spearheaded the push, stated in a letter to Pelosi at the time. “But it can be nearly impossible to determine what counts as ‘nonpublic knowledge’ or how personally involved members are in their stock trades.

“Instead, Congress should close these loopholes by simply banning members from owning or trading individual stocks while in office,” Golden said. “We came to Congress to serve our country, not turn a quick buck.”

But other lawmakers share Pelosi’s opposition to a trading ban.

According to a report by Unusual Whales, Crenshaw had the fifth-highest returns of any member of Congress for his stock trading in fiscal year 2021. During an appearance on the All American Savage Show podcast, he discussed the returns and his position on Congress members trading on the stock market.

The host asked him whether he thought that sitting members of Congress should be allowed to invest in the stock market.

The Texas Republican explained that while he would accept bans on buying and selling individual stocks, he thinks that members of Congress should still be allowed to invest in exchange-traded funds and similar stock funds.

“I’m kind of neutral on it,” Crenshaw said.

But he claimed that if such a ban were put in place, “no one would run for Congress because you have no way to better yourself.”

Allegations of insider trading against Pelosi and her husband are nothing new.

In 2011, CBS’s “60 Minutes” aired an episode that accused several prominent lawmakers, including Pelosi, of insider trading.

According to that report, Paul Pelosi bought $2 million of stock in Visa Inc. in March 2008. Later the same year, the House Judiciary Committee approved legislation that would have hurt the bottom line of big name credit card issuers over “swipe fees.” But that bill was also suddenly and inexplicably dropped and was never brought to the House floor.

Observers at the time accused Pelosi of using her influence as speaker to snuff out the bill, a charge she vehemently denied.

But not long after the “60 Minutes” report, Congress passed the STOCK Act, which included the so-called “Pelosi provision”—a clause that forbade members of Congress from receiving early access to private stock offerings simply because of their positions.

In December 2020, Paul Pelosi bought 25 call options in Tesla Inc., one of the leading electric vehicle (EV) manufacturers in the world. Both during the campaign and after being declared victor, President Joe Biden emphasized the importance of EVs in his administration’s efforts to reduce U.S. carbon emissions.

Since then, Speaker Pelosi has been outspoken in support of the Build Back Better bill, which includes, among other climate provisions, hundreds of billions of dollars in funding for an EV tax credit and an EV charging station network.

The purchase quickly raised some eyebrows as commentators considered the ethics of such a purchase ahead of Biden’s pro-EV administration.