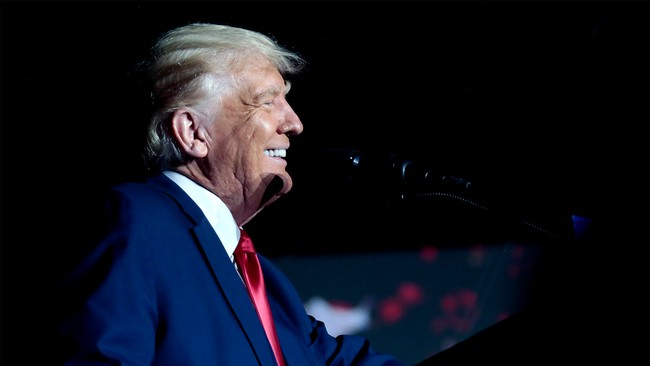 And nothing Trump did, nothing they even accuse him of doing, is anything like something that should, in any non-banana republic country, justify his likely opponent in the next presidential election trying to toss him in jail even as the current president’s approval rating drops like Toobin’s pants during a Zoom call.

But this not about law. This is not about equal justice. This is certainly not about maintaining most basic norms that once separated us from tinpot dictatorships. No, this is about power. Specifically, it is about the ruling elite and its garbage party, the Democrats, clinging to power even as the midterm election in a couple weeks threatens to utterly destroy them in the legislative branch and out in the states.

They cannot keep power legitimately, or even semi-legitimately, so they now stand ready to try to keep it plainly and openly illegitimately. And I kind of hope the Democrats go for it. Indict him. Please.

Why? Do I hate Donald Trump? No. Do I want him out of the way for other candidates? No, I want a primary, and anyway indicting him would only make it more likely that he would run. Do I want to see this blow up in their smug faces like every other fascist flex they have tried in order to take him out? Maybe a little.

But I really want them to indict Donald Trump on these manifestly bullSchiff trumped-up charges precisely because they are such manifest bullSchiff and because it would mean that the total corruption of the federal justice system can no longer be denied, excused, or explained away as an aberration or fluke. I want Trump to serve as what he has so effectively served as since he came down that elevator in June 2015 – a spotlight that illuminates what total trash our ruling class has become.

There are, among our party, still a few invertebrates who refuse to accept that everything the institutions do is a lie and a scam designed to perpetuate ruling class power. They want to believe, they yearn to believe, they will themselves to believe that the DOJ and the FBI and all the rest are packed to the gills with good apples, though we rarely ever see them. Abortion fanatics bomb pro-life clinics just as BLM scumbags looted, burned, and attacked people, and nothing. But pro-life prayers get SWATed and people walking through our Capitol protesting get locked up until dragged in front of the DC kangaroo courts. But the softcons console themselves that these are minor aberrations, that the system is not terminally corrupt and therefore drastic measures are not called for. No, they can just go along and get along and tell themselves the comforting lie that our federal law enforcement apparatus is not the personal Stasi for the ruling caste.

I want Trump indicted because then our own Republican politicians cannot hide. They will have a choice, to stand with us on the side of the Constitution or on the side of its enemies. Being indicted on legally ridiculous charges will be Trump’s greatest and most important act of clarification. Trump has always been the Great Clarifier – it is he whose stubborn refusal to comply forced the ruling elite to drop its benign mask and fully embrace the fascist id that was always there lurking under the smiling nanny-state mask.

To be sure, some Republicans will fail the test. Trash like Miracle Whip Mitt will certainly side with the enemy – whenever any of the “classy gentlemen” like him or Bush have to choose between their Bushwood Country Club pals and we people who had their backs while the left was filleting them, they will always choose the Judge Smails set over us.

But others will come around, with the scales falling from their eyes as the harsh truth becomes undeniable.

Our institutions are corrupt, terminally, and the only way to save this village is to burn it to the grounds.

So, indict Donald Trump, you fascist clowns. Heighten the contradictions. Force the issue. Throw us in that briar patch.

Get Inferno, the seventh book in the Kelly Turnbull series of conservative action novels set in America after a notional national divorce! Catch up with all my action-packed novels, including People’s Republic, Indian Country, Wildfire, Collapse, Crisis, and The Split, as well as the non-fiction book We’ll Be Back: The Fall and Rise of America. Plus, keep up the fight by joining Townhall VIP, including an extra Wednesday column, my weekly Stream of Kurtiousness video, and the Unredacted podcast!

My super-secret email address is kurt.schlichter@townhall.com