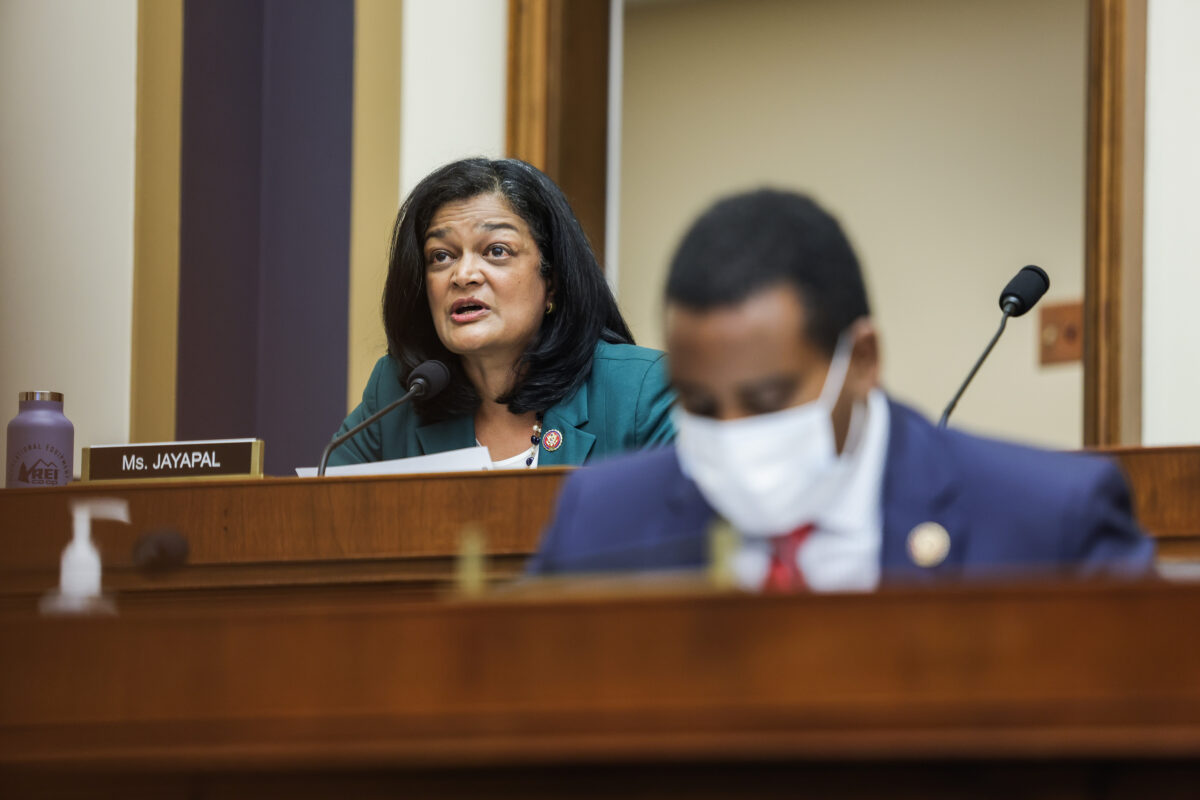 A group of liberal Democrats are urging President Joe Biden to reconsider his approach to the Ukrainian conflict with Russia, the first significant sign of opposition to the White House’s Ukraine strategy from Democrats.

In an Oct. 24 letter spearheaded by House Progressive Caucus leader Pramila Jayapal (D-Wash.), a total of 30 Democrats called on Biden to seek a peaceful resolution to the conflict (pdf).

“We write with appreciation for your commitment to Ukraine’s legitimate struggle against Russia’s war of aggression,” the letter, addressed to Biden, began. “Your support for the self-defense of an independent, sovereign, and democratic state has been supported by Congress, including through various appropriations of military, economic and humanitarian aid in furtherance of this cause.

“Your administration’s policy was critical to enable the Ukrainian people, through their courageous fighting and heroic sacrifices, to deal a historic military defeat to Russia, forcing Russia to dramatically scale back the stated goals of the invasion.”

The lawmakers praised Biden for his commitment to keeping the U.S. away from direct involvement in the conflict, citing the risk of nuclear war.

“Given the catastrophic possibilities of nuclear escalation and miscalculation, which only increase the longer this war continues, we agree with your goal of avoiding direct military conflict as an overriding national-security priority,” the lawmakers wrote.

The coalition then turned to the thrust of the letter: calling on Biden to seek a way forward to ending the conflict.

“Given the destruction created by this war for Ukraine and the world, as well as the risk of catastrophic escalation, we also believe it is in the interests of Ukraine, the United States, and the world to avoid a prolonged conflict,” Jayapal wrote. “For this reason, we urge you to pair the military and economic support the United States has provided to Ukraine with a proactive diplomatic push, redoubling efforts to seek a realistic framework for a ceasefire.”

The lawmakers admitted that this course would be difficult.

However, they wrote, “if there is a way to end the war while preserving a free and independent Ukraine, it is America’s responsibility to pursue every diplomatic avenue to support such a solution that is acceptable to the people of Ukraine.”

Jayapal added that negotiations should focus on restoring the integrity of Ukraine’s borders and the sovereignty of its nation while offering Russia reductions in the massive sanctions currently battering the Russian economy.

The alternative, the lawmakers said, “is protracted war, with both its attendant certainties and catastrophic and unknowable risks.”

Additionally, they noted that an end to the conflict would help to get prices under control. Between Russia’s status as one of the most oil-rich nations in the world and Biden’s decision to limit U.S. oil production, U.S. and European consumers alike have seen dramatically higher prices at the pump than they did a year ago.

“A war that is allowed to grind on for years—potentially escalating in intensity and geographic scope—threatens to displace, kill, and immiserate far more Ukrainians while causing hunger, poverty, and death around the world,” Jayapal wrote. “The conflict has also contributed to elevated gas and food prices at home, fueling inflation and high oil prices for Americans in recent months. Economists believe that if the situation in Ukraine is stabilized, some of the speculative concerns driving higher fuel costs will subside and likely lead to a drop in world oil prices.”

Jayapal insisted that her faction was not calling on Biden to pressure Ukraine into any settlement they find odious, but said that “as legislators responsible for the expenditure of tens of billions of U.S. taxpayer dollars in military assistance in the conflict, we believe such involvement in this war also creates a responsibility for the United States to seriously explore all possible avenues, including direct engagement with Russia, to reduce harm and support Ukraine in achieving a peaceful settlement.”

“In conclusion, we urge you to make vigorous diplomatic efforts in support of a negotiated settlement and ceasefire, engage in direct talks with Russia, explore prospects for a new European security arrangement acceptable to all parties that will allow for a sovereign and independent Ukraine, and, in coordination with our Ukrainian partners, seek a rapid end to the conflict and reiterate this goal as America’s chief priority,” the letter concluded.

A few hours after The Washington Post first reported on the letter, Jayapal clarified her remarks in a follow-up statement and emphasized her coalition’s continued support for the war effort in Ukraine.

“In a letter to President Biden today, my colleagues and I advocated for the administration to continue ongoing military and economic support for Ukrainians while pursuing diplomatic support to Ukraine to ensure we are helpful partners on efforts to reach a solution that is acceptable to the people of Ukraine,” wrote Jayapal.

“Let me be clear: we are united as Democrats in our unequivocal commitment to supporting Ukraine in their fight for their democracy and freedom in the face of the illegal and outrageous Russian invasion, and nothing in the letter advocates for a change in that support,” she added.

“Diplomacy is an important tool that can save lives—but it is just one tool,” Jayapal added. “As we also made explicitly clear in our letter and will continue to make clear, we support President Biden and his administration’s commitment to nothing about Ukraine without Ukraine.”

The letter is the first sign of significant opposition to the White House’s Ukraine approach from within the president’s party.

However, Republicans have also been critical.

Recently, House Minority Leader Kevin McCarthy (R-Calif.)—the most likely pick for speaker if Republicans retake the House as expected—came under fire when he said Republicans would not continue to give Ukraine “a blank check.”

Since Biden took office, the federal government has sent over $52 billion in taxpayer money in aid to Ukraine, according to Statista. This level of spending, McCarthy said, should be scrutinized a bit more closely.

“I think Ukraine is very important,” McCarthy said on CNBC on Oct. 19. “I support making sure that we move forward to defeat Russia in that program.

“But there should be no blank check on anything,” McCarthy added. “We are $31 trillion in debt.”

As voters continue to be battered by almost-unprecedented levels of inflation, record-breaking crime across U.S. cities, and an unrelenting flow of illegal aliens across the southern border, the Ukrainian issue may have a backseat role in the minds of many voters.

Republicans are currently expected to take the House, and very possibly the Senate. If the GOP takes back either chamber, Biden may find that he has issues continuing to send the bountiful defense and humanitarian aid packages that have been undertaken by the 117th Congress.