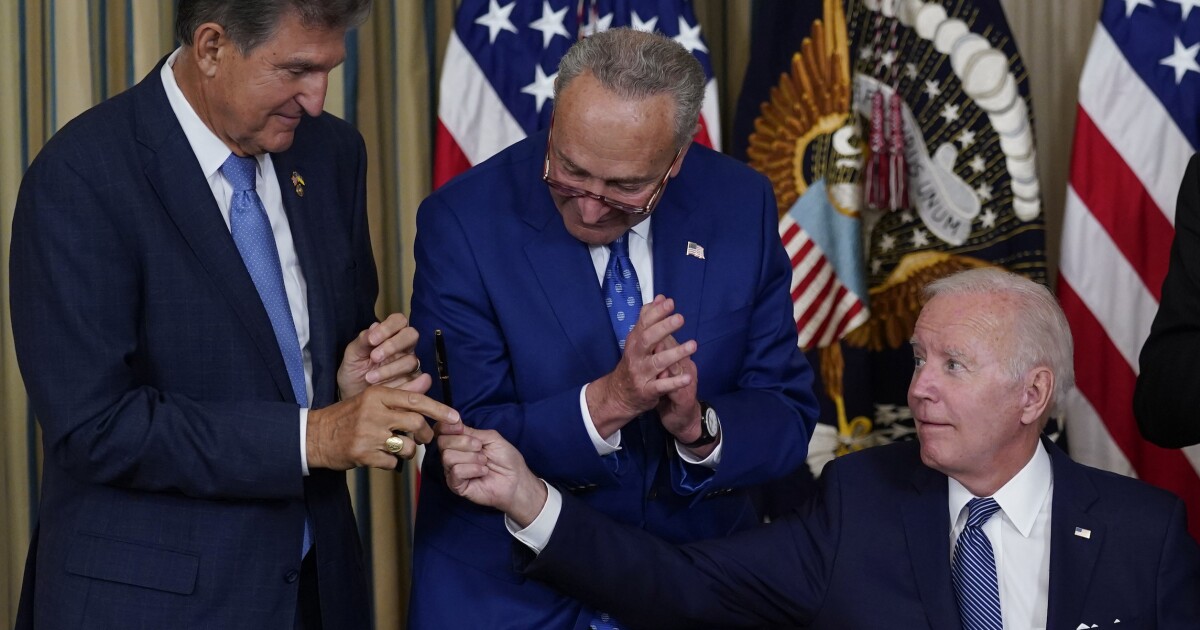 When Sen. Richard Shelby, then a conservative Democrat from Alabama, was asked to summarize President Bill Clinton’s first budget, he replied, “The tax man cometh.”

“It hikes the tax burden on Americans making as little as $20,000 a year and sends 87,000 IRS enforcers to harass small businesses and middle-class families,” said the Republican National Committee’s rapid response director, Tommy Pigott. “But too bad for Biden, the American people see right through him.”

As the White House and Democratic congressional leaders celebrated the bill’s passage and signing as a fulfillment of major campaign promises, the RNC said in a statement, “Every House Democrat just voted to raise your taxes and make inflation worse — and they’re happy about it.”

The same scenario played out in the Senate, with even Sen. Joe Manchin (D-WV) on board.

In 1993, conservative and centrist Democrats balked at the Clinton tax increase. That forced Vice President Al Gore to also cast a tiebreaking vote to pass it. Unlike Vice President Kamala Harris today, Gore was not presiding over a 50-50 Senate but a much larger Democratic majority.

The Clinton tax hike was part of a constellation of issues that cost Democrats those majorities. Republicans took control of the House for the first time in 40 years, gaining 54 seats, and the Senate for only the second time since the 1950s. Shelby, of “tax man” jibe fame, switched parties to join them the following day.

But the failure of the Clinton tax increase, billed by Republicans as the largest in history, to derail the tech boom later in the decade helped Democrats neutralize the tax issue. While the economy didn’t really get rolling until a few years later, and after a capital gains tax reduction and some other tax cuts, Democrats argued it had stimulated growth by reducing the deficit and lowering interest rates.

Clinton claimed his approach was not “tax and spend” but “invest and grow.”

Biden has also said he is trying to grow the economy “from the middle out,” in contrast with what he describes as Republican “trickle-down economics,” a derogatory term for supply-side and other conservative economic theories.

More importantly for the politics of taxes, Democrats learned to contain tax revolts by keeping the focus on the top marginal income tax rate and high earners. Biden has followed in their footsteps by pledging that households making less than $400,000 will not pay a “penny” more in taxes and that the audits conducted by a beefed-up IRS will only hit rich tax cheats. This is in contrast with Walter Mondale breezily suggesting broad-based tax increases in 1984 and then losing in a 49-state landslide.

Republicans claim Biden is breaking the first promise and cannot plausibly make the second. “What’s especially disturbing is that while the green credits are intended to boost politically favored activities that are economically questionable, the tax increases are aimed right at the heart of productive work and investment,” the Wall Street Journal editorialized earlier this year.

Whatever the impact on this year’s midterm elections, Democrats’ spending ambitions are reaching the limit of what can be achieved through hikes to the top marginal tax rate. Inflation itself was an example of middle-class consumers bearing the cost of high spending even when not imposed through direct taxes.

The spending bill that Biden signed was a fraction of the proposals he had been advocating months, which were themselves smaller than the price tag of progressive wish lists like the Green New Deal. Biden’s economic team was forced to counsel higher taxes lest the massive spending “widen the deficit by such a large degree that it could risk triggering a spike in interest rates, which could in turn cause federal debt payments to skyrocket,” the Washington Post reported last year.

That’s a far cry from the Clinton-era boasts of growing the economy through smaller deficits and lower interest rates.

The middle class is ultimately where the money is and where Democrats will need to seek revenues.

When the tax man cometh for them, Democrats could pay the political price.