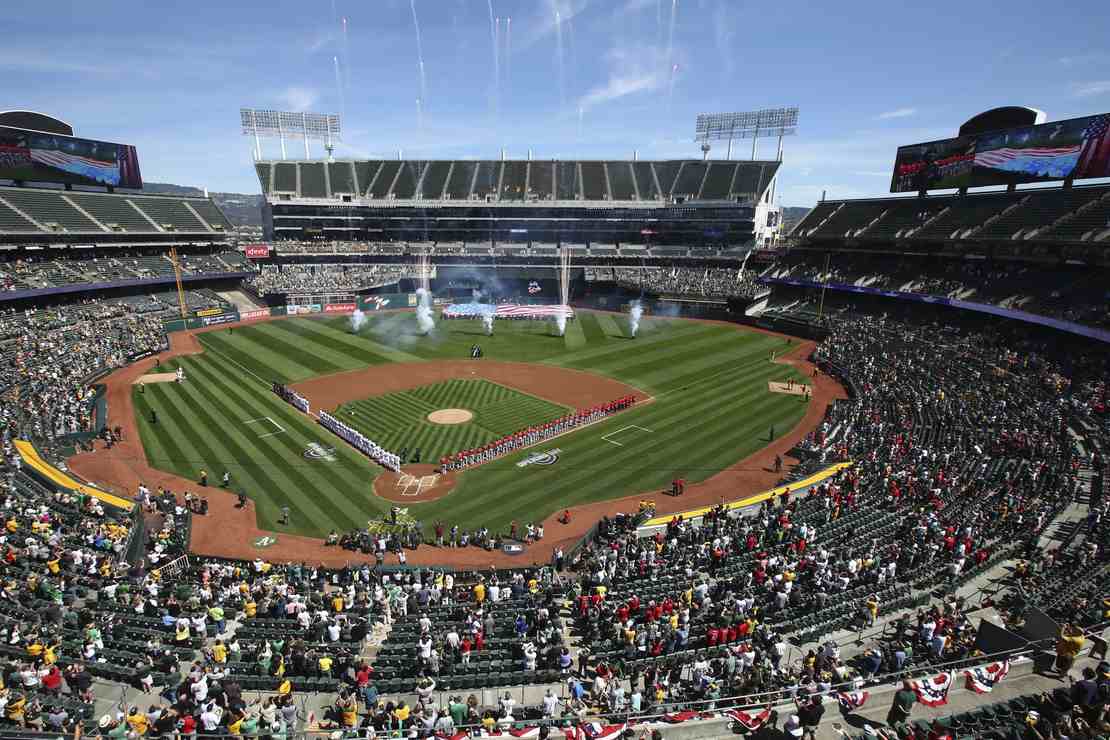 Here at the sports desk located somewhere below decks of the Good Pirate Ship RedState, we hold certain truths to be self-evident. For sheer drama, nothing beats overtime playoff hockey. College football is why the NFL doesn’t bother with a minor league system. And MLB commissioner Rob Manfred is the most tone-deaf imbecile ever to head a major sport in this country.

The latest example of Manfred’s amazing inability to read a room came on Tuesday, July 19th when in a pre-All-Star Game press conference, he again touched on the need for the Oakland A’s and Tampa Bay Rays to get new ballparks. From ESPN:

“I was at the Coliseum myself recently,” Manfred told the Baseball Writers’ Association of America on Tuesday in Los Angeles. “The condition of the Coliseum is a really serious problem for us. I’ve said it, this is not news. It is not a major league-quality facility at this point.”

Thank you, Captain Obvious. For the record, the A’s are contractually bound to the rapidly disintegrating Oakland Coliseum through the 2024 season.

Oakland Mayor Libby Schaaf is pushing for approval of a waterfront ballpark at Howard Terminal that would cost more than $1 billion. The San Francisco Bay Conservation and Development Commission voted last month to reclassify a 56-acre terminal at the Port of Oakland as a mixed-use area where a new ballpark could be built.

Also for the record, the A’s, despite their unwillingness to pay enough in salary to field a competitive team (Oakland enters the All-Star break last in payroll and with the worst record in baseball), are willing to write the entire check for a new ballpark at Howard Terminal. It is part of the Port of Oakland and is reasonably close to Jack London Square, the closest thing Oakland has to a conclave where people gather to dine and shop. The city would have to pony up for some infrastructure costs, but not much. However, given that we’re dealing with California politicos here and lots of them … you get the idea. These people would have a 17-hour debate on whether a kid selling lemonade on their front lawn needed a permit and a commitment to diversity hiring.

Whether Las Vegas wants the A’s or not. Frankly, I suspect Sin City has all the sports it wants with the Raiders and the Golden Knights.

An Oakland City Council vote on a ballpark is possible later this year.

Which, believe it or not, is true.

“Mayor Schaaf continues to work hard to try to get an arrangement, an agreement to develop the Howard Terminal site,” Manfred said. “I’m hopeful that that can still happen. And I said this recently and I’ll repeat, it needs to happen now. It needs to be done.”

Schaaf, who is not running for re-election, doubtless would prefer not having on the resumé, “Mayor of the city that lost three professional sporting franchises during my time in office.” With the Raiders in Las Vegas and the Warriors adding to their trophy case at their nice new arena in San Francisco, Schaaf dearly wants to keep the A’s in Oakland. Whether she can swing enough votes on the Oakland City Council, plus other agencies, including the county Board of Supervisors, remains to be seen. Certainly, Fisher, who has been invisible throughout, isn’t helping matters. Neither is dumping star players the moment they get close to needing a new contract, but that’s the aggravated A’s fan in me talking.

“Mr. Fisher has to make a decision as to whether he wants to make an agreement or can make an agreement that is approved by the City Council that would keep the A’s in Oakland,” Manfred said. “If that’s not possible, we have a process that deals with an application for relocation, and I assume that’s where it goes if in fact no agreement can be made in Oakland.”

What Manfred failed to mention is a fact tied into the aforementioned Warriors. Team owner Joe Lacob, who, much to Warriors fans’ delights and other NBA team owners’ irritation, is willing to spend whatever it costs to build and keep a winning team, once tried to buy the A’s. He’s still willing to buy the A’s and keep them in Oakland.

“I’ve had a standing offer to buy the A’s from John Fisher for I don’t even know how long. Over a decade,” Lacob said. “It’s up to him; it’s his business. It would have been smarter to sell to me a long time ago because we would have been partners, and he would have been able to own a part of the Warriors as well. I tried to tell him that. I would have done a ratio deal.

“You’ve seen the increase in value we’ve created by building a stadium and building the business. I do think it’s sad that we didn’t get the A’s over any time in the last 17 years. I think we would’ve done a really good job with the A’s. But, look, obviously I’m biased.”

What’s more, Lacob would be willing to build a new ballpark on the Coliseum site.

“Maybe there’s some practicality to building it on the current site,” Lacob said. “I still believe baseball stadiums do better in downtown locations. You’re competing, remember, with the Giants, who have a jewel of a ballpark on the waterfront.

“But having said all that, if you couldn’t do Howard Terminal for some reason, I do believe for the first time in many years maybe it could be done at the Coliseum site because you’re the only sports team in town … And build a ballpark village all around the site and create a destination. … Probably if I owned the A’s, I would take a fresh look.”

Lacob also takes a dim view of how Fisher is doing things.

Lacob said he’s rooting for Fisher to get a ballpark deal done — “I really like John. I hope he’s successful” — but disagrees with how the team has chased infrastructure dollars from Oakland, which has agreed to fund more than $350 million for off-site infrastructure.

“Even that, I would’ve had this thing done a long time ago. I’d just pay for it all privately like I did with the Warriors,” Lacob said. “And you know what? You get to say at the end of the day, ‘I didn’t take any money from you.’ You didn’t get the $300 million or $400 million in infrastructure money, whatever, but it’s easier for me to be able to take that tack.

“I think it’s the right thing in this world, in this place. I would’ve just gone and done it. Think of all the revenue you would’ve gotten if you had done it 10 years ago. Sometimes people want to strike the best deal, but this isn’t a business like any other. They know the numbers better than I do for their situation, but sometimes you’ve just got to get it done.”

Anyway, we, the faithful few A’s fans, remain hopeful that one of two outcomes will occur. One, the Howard Terminal project finally receives approval, and the new ballpark becomes a reality. Two, Fisher tires of the whole thing and sells the team to Lacob, who then builds a new ballpark in Oakland. By himself in his spare time on the weekends if necessary.

At least there’s one certainty upon which all can agree: Rob Manfred can’t read the room to save his life.