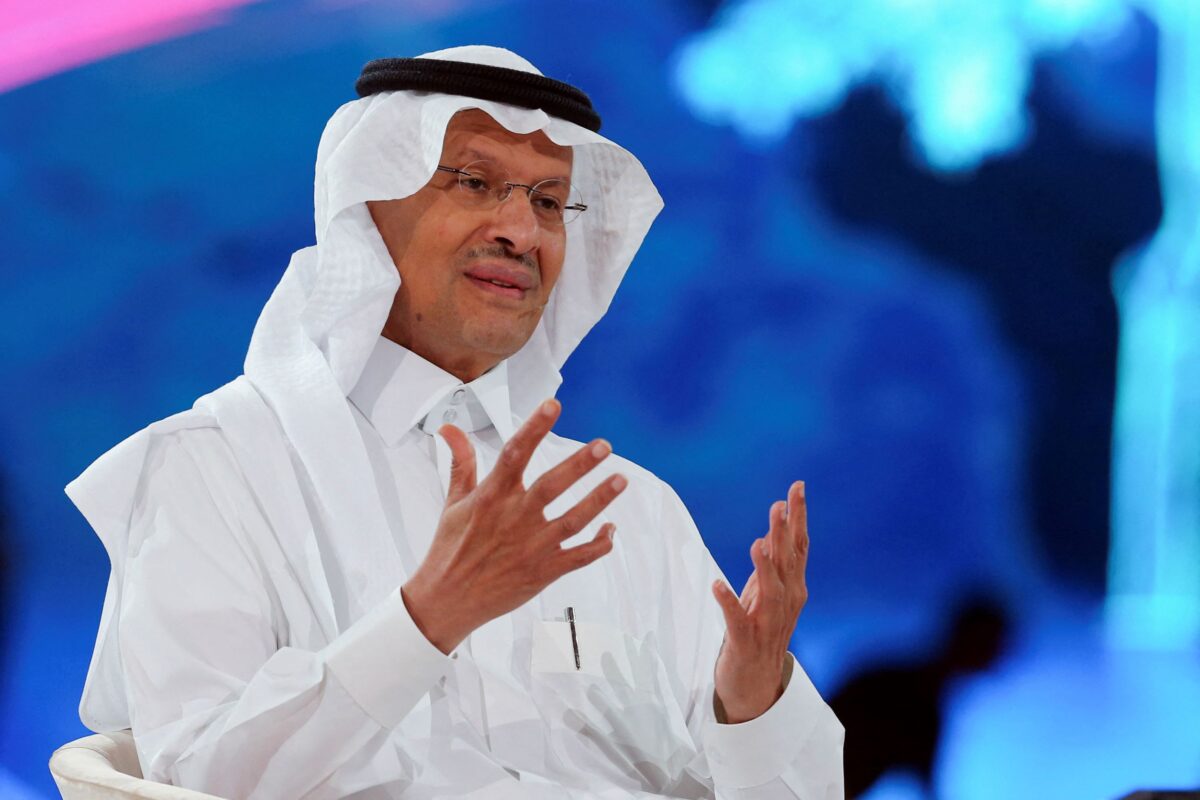 The Saudi Arabian energy minister indirectly slammed the decision by the Biden administration to release oil from the Strategic Petroleum Reserve (SPR) as an attempt to “manipulate markets.”

This is the latest spat between Riyadh and Washington over crude production.

Saudi Energy Minister Prince Abdulaziz bin Salman did not directly mention President Joe Biden over the tapping of the U.S. emergency oil stocks, according to a story in the Agence France-Presse.

However, the prince did refer to the recent move by the Biden administration to drain another 15 million barrels from the SPR onto the market through December, which will be expensive to replace.

Back in late March, the White House announced a plan to release 1 million barrels of oil per day from the reserve for the next 180 days.

“People are depleting their emergency stocks, had depleted it, used it as a mechanism to manipulate markets while its profound purpose was to mitigate shortage of supply,” Prince bin Salman told investors in Riyadh on Oct. 25, according to AFP.

“However, it is my profound duty to make it clear to the world that losing emergency stock may become painful in the months to come.”

The release was the final portion of a program to release 180 million barrels of oil in response to an energy crisis caused by Russia’s invasion of Ukraine and the administration’s own green energy policies.

Since Biden took office, his administration has virtually declared war on the domestic fossil fuel industry to fight climate change.

Drilling and exploration in U.S. territory has slowed, while new regulations and the cancellation of the Keystone Pipeline have made the United States once again dependent on foreign imports.

“The United States has reverted from net exporting its vast reserves of fossil fuels to net importing, while recklessly draining its strategic petroleum reserves, leaving the country vulnerable in a real crisis,” Michael Wilkerson, a strategic advisor and investor, told The Epoch Times.

Biden’s critics have also slammed his move to tap oil from the critically depleted SPR before the midterm elections, characterized as a cynical political move.

“It is unacceptable for the Biden administration to use our emergency oil reserves as a political tool to temporarily lower gas prices ahead of the election,” wrote Rick Perry, a former energy secretary and Texas governor, in a FOX News opinion column.

“At every turn, this administration has chosen to undermine and impede American energy production. Biden has favored buying foreign oil over working with American companies here at home, and has chosen short-term solutions, like depleting the SPR or pleading with OPEC, over long-lasting change,” blasted Perry.

Relations between Washington and the world’s largest crude exporter have been strained since Biden took office.

The Saudis Anger Washington Over Moscow

The latest play by the Biden White House comes after a decision in early October by the Saudi-led cartel to cut oil production by 2 million barrels a day from November.

President Biden had privately urged the Saudi crown prince to wait until after the midterms to cut oil production, according to a Wall Street Journal report, and warned him that rejecting the offer would be a clear sign of siding with Russian President Vladimir Putin.

The United States and its allies have been putting pressure on countries around the world to cut ties and trade relations with Russia, in an effort to isolate it over its invasion of Ukraine.

The Saudis, along with other key oil exporters, have decided to stick with Moscow, even at the expense of their ties with Washington.

The crown prince has even cozied up to Putin and Xi Jinping, as ties between the Gulf State kingdom and the United States become increasingly frigid.

OPEC’s move this month surprised the administration, which accused the Saudis of “aligning with Russia” over its longstanding American ally.

Prince Abdulaziz hit back against that assessment at the Riyadh summit.

“I keep listening, are you with us or against us? Is there any room for, ‘We are for Saudi Arabia and for the people of Saudi Arabia’?”

“I think we as Saudi Arabia decided to be the maturer guys and let the dice fall,” when asked by AFP about improving relations with Washington.

Members of the Washington establishment have proposed retaliatory measures against the Saudis, such as new legislation to punish them and their fellow OPEC members for alleged price fixing.

A bill called No Oil Producing and Exporting Cartels Act (NOPEC) has been floating around on Capitol Hill, with some bipartisan support, according to The New York Times.

The Group of Seven nations are also planning to cap Russian oil sales at an enforced low price, which has angered Riyadh.

Saudis Attempt to Diversify Away From Oil Exports

Hundreds of CEOs and investors are in the Saudi capital for the three-day Future Investment Initiative (FII), a World Economic Forum- style conference created to illustrate the kingdom’s geopolitical strength.

The FII, also known as “Davos in the Desert,” was launched in 2017 by Crown Prince Mohammed bin Salman to entice foreign investment, as the desert nation attempts to diversify away from its revenue-dependency on crude exports.

Nearly 400 American CEOs are expected to participate, but in an ominous sign, no representatives from the U.S. government were invited, unlike in years past, according to AFP.

“The United States, while simultaneously begging bankrupt and decrepit Venezuela for help, will still have to buy oil from the Saudis for the foreseeable future. And the Saudis will happily sell it, but on their terms. In less than two years, the United States has gone from being a price-setter to a cap-in-hand price-taker. We have absolutely no leverage, and OPEC knows it,” said Wilkerson.

Meanwhile, at the summit, JPMorgan CEO Jamie Dimon remarked to AFP about his optimism regarding future ties between Saudi Arabia and the United States.

“Saudi Arabia and the United States have been allies for the last 75 years. .. They’ll work it through,” and that “these countries will remain allies going forward.”