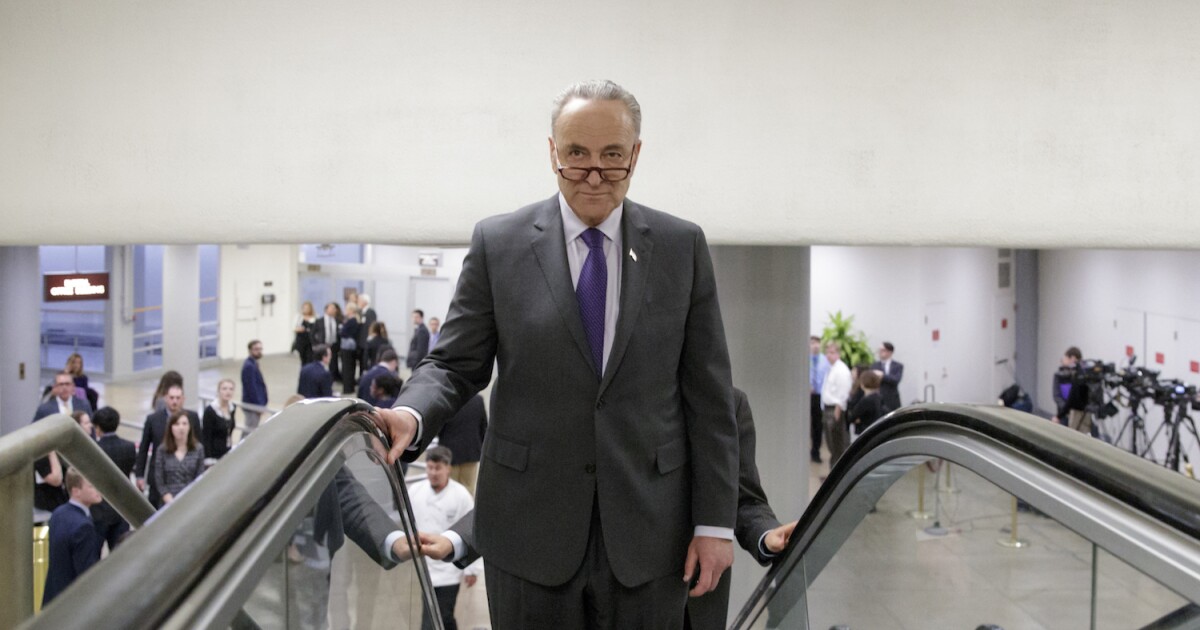 Chuck Schumer (D-NY) achieved his long-held dream of becoming Senate majority leader in 2021, with a pair of runoffs in Georgia handing him the slimmest of majorities in a 50-50 chamber due to Vice President Kamala Harris’s tiebreaking vote.

Soon, the five-term New York senator will be able to claim an outright majority after Sen. Raphael Warnock’s runoff win in Georgia gave Democrats their 51st seat in the next session of Congress.

The news is bittersweet after Democrats lost the House on Nov. 8, meaning Schumer will have a tough time getting legislation to President Joe Biden’s desk for the next two years.

But Warnock’s win will give Schumer some breathing room in his own chamber, and the majority leader can toss a power-sharing agreement that hamstrung Senate Democrats into the trash bin.

Schumer was almost giddy on the heels of the election victory. He’ll be able to take his second victory lap in as many days after he is reelected majority leader on Thursday morning, when Senate Democrats are set to hold their leadership elections.

“They say all good things come to those who wait. And this outcome is absolutely worth the wait. After one year, 10 months, and 17 days of the longest 50-50 Senate in history, we have 51, a slim majority,” Schumer said at a press conference Wednesday, holding up five fingers on one hand and one on the other.

Tuesday’s victory in Georgia caps off an unexpectedly strong midterm performance for Democrats. This cycle marks the first time since 1914 that every sitting senator running in the general election is staying in office and the first time since 1934 that every Democratic incumbent in the majority party won reelection. Democrats were able to overcome the political headwinds of President Joe Biden’s slumping approval ratings and soaring inflation.

“I probably talked to every one of the candidates. I probably did every single day,” Schumer said to reporters Wednesday morning.

Elected to represent New York in the House in 1980 and then the Senate in 1998, Schumer has long been known as a master communicator. Schumer leads the party with messaging discipline and a focus on party unity. The senior New York senator is known as a publicity hound and a quote machine, often addressing the media with his eyeglasses on the tip of his nose. There’s an old joke originated by the late Republican Sen. Bob Dole, who said, “The most dangerous place in Washington is between Chuck Schumer and a TV camera.”

The 72-year-old has taken a more hands-on approach with his members than his predecessor, the late Sen. Harry Reid, often brandishing his flip phone — which he calls his “secret weapon.” When asked by a reporter in February 2021 how he is able to keep Democrats united with a slim 50-50 majority, the Senate leader whipped out his LG Wine. In the past, he has bragged about his commitment to connecting with his colleagues directly, not through staff. In an interview with the Associated Press, Schumer said he has every Democratic senator on speed dial and knows many of their numbers by heart.

The New Yorker knows a thing or two about winning elections. He chaired Senate Democrats’ campaign arm from 2005 to 2009, overseeing more than a dozen Democratic pickups between the 2006 and 2008 elections.

This cycle, Democrats were able to campaign on a bevy of laws Schumer helped usher through Congress. Democrats were able to pass a major COVID-19 relief bill, an infrastructure law, gun safety legislation, a historic climate, tax, and healthcare bill, legislation intended to protect same-sex marriage, and a bill to expand medical marijuana research. Schumer said Wednesday the midterm elections made him more of a believer in the power of legislative achievements.

“A turning point really occurred this summer when we had six major bills, five bipartisan — all of which affected people’s lives. They were what people wanted,” he said.

Brian Fallon, a former aide to Schumer, said the majority leader has “come into his own” over the last couple of years in terms of his ability to corral his caucus and has “proven an effective governing partner for President Biden.”

“Leader Schumer has pulled multiple rabbits out of his hat the last two years with an evenly divided Senate,” Fallon said in an email to the Washington Examiner. “He has presided over one of the most productive Congresses ever while also guiding Democrats through a difficult election cycle without losing a seat.”

Under Schumer’s leadership, the Senate has confirmed 84 Biden-nominated judges and 25 appeals court judges, including Ketanji Brown Jackson to the Supreme Court. The Senate has been confirming judges at a faster rate than former President Donald Trump had before the 2022 election. Next session, the additional seat will allow Democrats to have clear majorities on committees, making it easier to move future legislation but also executive and judicial nominations even more quickly.

“We’ve put on the bench — two-thirds are women; half are people of color. There are more black women on the federal bench now, I think more today, than all the others combined before Biden became president and we got into the majority,” Schumer said at his press conference.

The next two years won’t be easy for the Senate majority leader, however. House Republicans will preside over a razor-thin majority of their own, lending outsize influence to the conservative House Freedom Caucus. With Minority Leader Kevin McCarthy (R-CA) looking to appease his right flank, compromise could be difficult to come by should he become House speaker on Jan. 3.

“One of the things I hope to do as leader, even in this political climate, is to reach out to Republicans. There are a good number of Republicans in the Senate and House that are not MAGA Republicans,” Schumer said. “It is my intention to reach out and work in a bipartisan way.”

Additionally, now that House Speaker Nancy Pelosi (D-CA) is stepping down from Democratic leadership, Schumer will need to work with a less experienced Democratic successor in the House of Representatives, Rep. Hakeem Jeffries (D-NY). Both Schumer and Jeffries hail from New York City and live in Brooklyn: One is Congress’s first Jewish leader and the other its first-ever black party leader.

“It’s pretty gangster,” said Rep. Jamaal Bowman (D-NY) when asked by reporters about the two New Yorkers becoming the two most powerful Democrats in Congress a couple of weeks ago. “We’ve got great leaders from across the country, but for it to land that way is pretty dope.”

But the even larger battle ahead for Schumer is the number of Senate Democratic incumbents up for reelection in 2024 — seven of which are in states that went for Trump in 2016, 2020, or both. There are no Republican seats up in states won by either Hillary Clinton or Biden.

Schumer acknowledged the challenges ahead.

“We have great senators — we have a large number who are up in Republican-leaning states. But look, they’re great candidates, and we’re going to do everything we can to help them,” he said Wednesday.