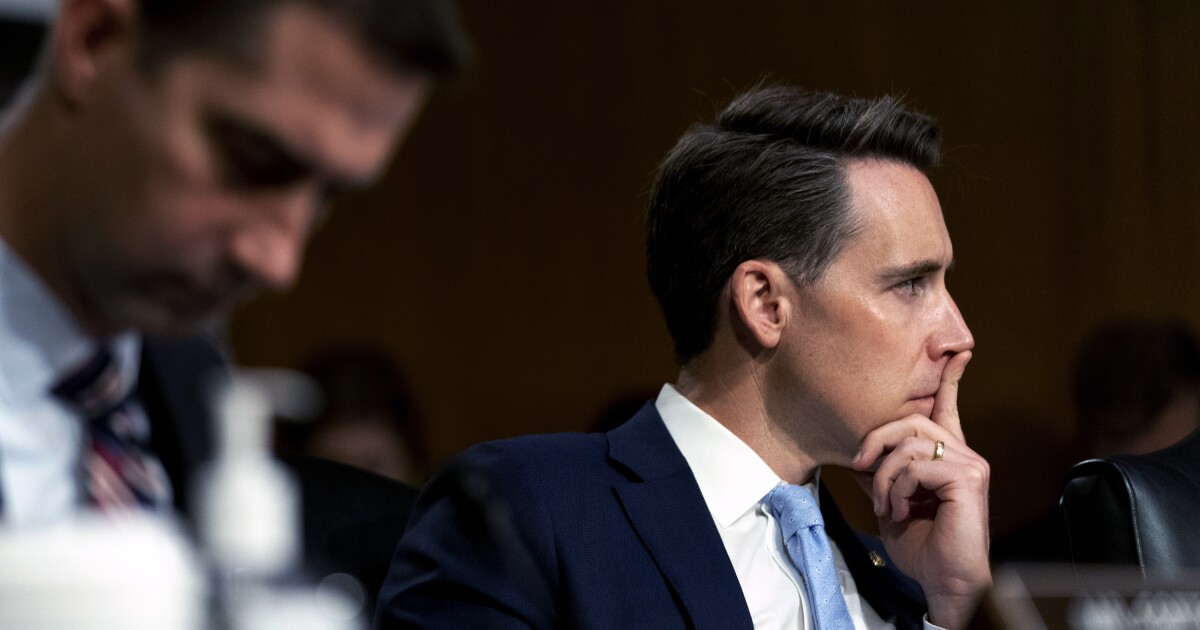 A Senate hearing on the ramifications of the Supreme Court ruling on abortion devolved briefly into an argument over whether men could get pregnant and featured a Democratic witness accusing Sen. Josh Hawley (R-MO) of transphobia.

The hearing in Senate Judiciary Committee on Tuesday was meant to examine the legal consequences of the Supreme Court decision in Dobbs v. Jackson Women’s Health Organization that overturned Roe v. Wade and the federal guarantee to abortion rights nationwide, but the most dramatic moment came when Republicans questioned a witness about her resistance to using the term “women” in the context of abortion.

Sen. John Cornyn (R-TX) started the line of questioning when he asked the witness, Khiara Bridges, a professor at the University of California Berkeley School of Law, if an unborn child has value.

“I think that the person with capacity for pregnancy has value,” Bridges responded.

Cornyn said Bridges did not answer his question. She replied that she was answering a question “more interesting to me.”

Hawley (R-MO) questioned Bridges on the term “person with capacity for pregnancy.”

Bridges said that abortion is not a consideration only for women because transgender and nonbinary people can be pregnant. When Hawley followed up by asking her what abortion rights were about, Bridges accused him of transphobia.

“I want to recognize that your line of questioning is transphobic and it opens up trans people to violence,” she said.

“Wow, you’re saying that I’m opening up people to violence by asking whether or not women are the folks who can have pregnancies?” he responded.

During the exchange, Bridges asked Hawley if he believed men could get pregnant.

“No, I don’t think men can get pregnant,” he responded.

“So you’re denying that trans people exist!” she said.

The exchange was part of a hearing that foreshadowed a difficult road for lawmakers seeking to pass either abortion rights legislation or new restrictions on the procedure as both sides of the contentious debate remain unable to garner enough support for their measures to clear the upper chamber’s 60-vote filibuster threshold.

Sen. Dick Durbin (D-IL), the chairman of the committee, said the Supreme Court “has unleashed a healthcare crisis across America.”

“And make no mistake: Women’s health and [in] some cases their lives are at risk,” he said.

Sen. Chuck Grassley (R-IA), the ranking member of the committee, argued: “This ruling doesn’t ban the practice of abortion, but instead empowers the people through their elected representatives to make commonsense policy decisions.”

“It takes policy out of the hands of unelected judges,” he said.

Dr. Colleen McNicholas, the chief medical officer of Planned Parenthood of the St. Louis Region and Southwest Missouri, argued abortion should be a medical issue rather than a legal one and that the Planned Parenthood clinic in Fairview Heights, Illinois, has seen an increase in out-of-state patients since the ruling.

“Almost overnight, our Illinois clinic has seen appointments triple — and that’s already on top of a double-booked schedule we were sustaining in the wake of Texas and Oklahoma’s abortion bans,” McNicholas said.

But Denise Harle, a senior counsel and director of the Center for Life at Alliance Defending Freedom, argued that states have “had the shackles removed from Roe’s judicial power grab.”

Earlier this year, House Democrats passed a sweeping abortion rights bill, the Women’s Health Protection Act, legislation that would make it a right for a woman to undergo an abortion procedure, as well as override certain state laws restricting those procedures, including mandatory waiting periods, bans on abortions via telemedicine, or requiring providers to have admitting privileges at a nearby hospital. The House is expected to pass the bill again this week in response to the Dobbs ruling.

But the bill failed in the Senate, where it both failed to clear the filibuster threshold or even a majority, when Sen. Joe Manchin (D-WV) broke with his party to oppose the bill on the grounds that it went beyond Roe.

The Dobbs ruling appears to have left that math unchanged, as both Manchin and Sen. Kyrsten Sinema (D-AZ) reiterated their support for the filibuster in the wake of the ruling. So even if Manchin were to change his position on the bill in Roe’s newfound absence, the bill would be unable to clear the Senate.