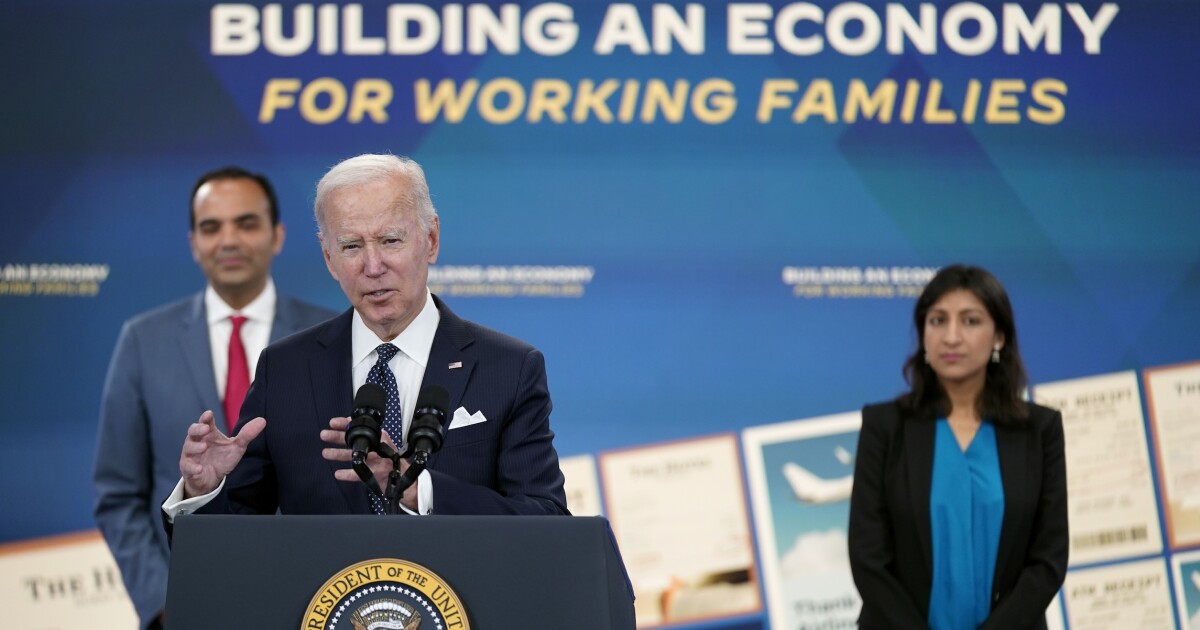 Bad headlines keep coming for President Joe Biden as he tries to hold bare congressional majorities in the final two years of his term. The latest: Mortgage rates have climbed above 7% for the first time since 2001, making it more difficult for people to buy a house and squeezing the rest of the economy.

With inflation and economic concerns topping voter worries ahead of the Nov. 8 midterm elections, bad news about the housing market is one more weight around the neck of the party in power. It’s one that Democrats have to overcome as they make their case to voters in the campaign’s final week.

Party leaders, including Biden, seem to realize they must confront economic issues head-on. But that wasn’t the case for much of August, September, or even October, and it may be too late for Democrats to change perceptions this late in the game.

“Going down the stretch, we need to make sure our closing message also talks about the cost of living, inflation, and the economy,” a quartet of veteran Democratic operatives wrote in an Oct. 21 “memo” to Democrats in the liberal American Prospect.

“Rising costs will beat us if we avoid the issue,” wrote Patrick Gaspard, the president and chief executive officer of the Center for American Progress, longtime Democratic pollsters Stanley B. Greenberg and Celinda Lake, and Mike Lux, a leading progressive activist and former senior Clinton White House staffer.

Five days later, the uphill battle became even tougher as mortgage rates crossed the 7% threshold, up from just 3% in January. While that figure may seem small, every percentage point gain in mortgage rates translates to thousands of dollars a year in higher costs for would-be homeowners.

“It means that demand for housing is collapsing,” said Desmond Lachman, a senior fellow at the American Enterprise Institute. “The housing market looks like it’s already in a recession.”

A bad housing market eventually fans out to the wider economy, with construction layoffs leading to less spending, which then leads to more layoffs. While there won’t a full-blown recession ahead of the midterm elections, polls consistently show that inflation tops voter concerns and that they trust Republicans more than Democrats on the issue by a 2-to-1 margin.

Vice President Kamala Harris has gone on tour for meetings on reproductive rights in states including California, Florida, Indiana, Massachusetts, Minnesota, Nevada, New Jersey, New Mexico, North Carolina, Pennsylvania, Texas, and Virginia, along with similar meetings with groups traveling to Washington, D.C. Biden, meanwhile, promised to sign an abortion-related bill on the first day of the new Congress if the Democrats maintain control.

But several party leaders, including Sen. Bernie Sanders (I-VT) and former Obama adviser David Axelrod, are sounding the alarm that Democrats can’t leave out the economy — especially with inflation staring people in the face every time they visit a gas station or grocery store.

“It’s pretty clear that Americans vote with their pocketbooks, and for that reason, it’s very important for Democrats to focus on the Republican threats against Social Security and Medicare,” Bannon told the Washington Examiner.

A strong message, in Bannon’s estimation, would focus on how Republicans want to repeal the Inflation Reduction Act, which could mean higher drug costs for seniors, and how House Minority Leader Kevin McCarthy (R-CA), if he becomes speaker, may lead the charge in trying to cut Social Security and Medicare.

Biden has been making more economy-focused statements in recent weeks. He gave a speech on plans to tackle “junk fees” from banks, airlines, and hotels on Oct. 26. And Biden has also said that GOP “mega-MAGA trickle-down” economics would cripple the economy.

Republicans are hammering on the wobbly economy as part of their core midterm message, along with crime and illegal immigration.

McCarthy has accused the Democrats of running the economy “into the ground,” contrasting it with Republicans who seek to offer “a new direction that gets our country back on track.”

A collapsing housing market and the crushing effect it will have on the wider economy may not be a deciding factor in the midterm elections. But it could be a sign that further economic pain will play a big role in the next election.

AEI’s Lachman predicts that unemployment will eventually rise too, taking away one of the last Democratic talking points on the economy — and that a full-blown recession could be in order.

“Voters are worried about inflation more so than mortgage rates, but it all derives from the fact that inflation went too high, and now the Federal Reserve is having to slam the breaks,” Lachman told the Washington Examiner. “The party is over.”