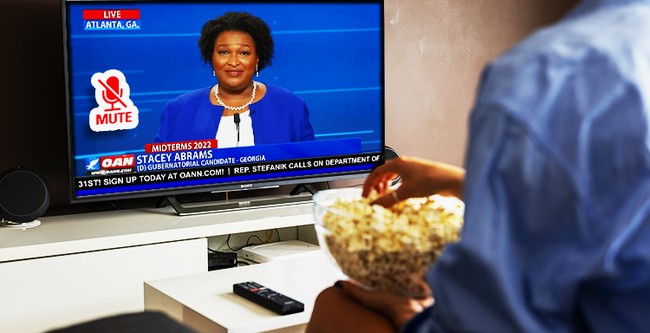 The gubernatorial debate for Georgia took place and based on the opening, it is easy to see where the hearts, if not the minds, of the statewide journalist rest. To open things up, the first question went to Chuck Williams of Channel 3 news in Columbus. His slavish tongue-bath query to Stacey Abrams will have you wanting to shower off.

Essentially the first debate question to Stacey Abrams from a journalist:
“Miss Abrams, the general public adores you and agrees with you on every policy – why are you not leading by 50 points???” pic.twitter.com/JGrLZcH17e

The Fetterman challenge continues for the press, and it appears clear they want to position his wife, Gisele, as the heir apparent should he be elected – and only then acknowledge his post-stroke condition is in fact problematic. In an effort to grease the skids, WaPo follows the Rolling Stone glowing profile, giving us all the reasons to support Gisele should she become elevated into his position at a later date.

– “His wife has emerged as a passionate voice — not only for him but for others / soft Gisele, who cries three times over the course of this interview / Her previous immigration status gives her a national platform to advocate for ‘dreamers’ and asylum seekers. / She charmingly referred to herself / some…wonder whether she should be the candidate instead /  The Fetterman campaign has capitalized on her popularity, selling ‘I’m With Gisele’s Husband’ T-shirts / If she wanted to run for office, she would have a strong following and a decent fundraising first quarter.”

As Pennsylvania Lt. Gov. John Fetterman recovers from a stroke while running for senator, his wife has emerged as a passionate voice — not only for him but for others. https://t.co/vIl6GdmI8D

Reporting on the Mirror – ABC NEWS

Rolling Stone, and other outlets, are detailing a story about ABC News producer James Gordon Meek who back in April saw the FBI arrive and had his home raided. (Remember when that was the acceptable term for this kind of action?) Meek worked primarily on Mid-East and terrorism affairs, and there is speculation behind this effort as he has been reported missing ever since the FBI visit. The Word from ABC News was that he resigned suddenly months ago. Even a book he was set to have released has disappeared from the publisher’s site and social media.

There is speculation he had classified information on his computer, but there are very few details surrounding anything since April.

Outside ABC News’ James Gordon Meek’s apartment, a surreal scene was unfolding, and his storied career was about to come crashing down. https://t.co/5pcvGeVer5

Both Kinds of Standards – MSNBC

Yes, yes – we know, it is Joy Reid. But even by her own standards of lunacy, this is an impressive amount of fantasy to pack into one tweet. Pick which fever-dream element is your favorite – “literal” fascism, her usual Handmaid’s Tale promises, the belief Democrats are preventing the environment from collapsing, or that anyone believes going after Hunter Biden’s crimes will lower gas prices. It is a marvel to contemplate how her mind operates.

It’s terrifying how many Americans will choose literal fascism, female serfdom, climate collapse and the reversal of everything from Social Security & Medicare to student loan relief bc they think giving Republicans the power to investigate Hunter Biden will bring down gas prices

There has been a deeply revealing poll by The New York Times/Sienna showing the efforts of the January 6 committee have not delivered the result of turning Americans against the Republican party, and Aaron Blake is not at all happy about this. More than simply showing a dwindling amount of people who regard the GOP as a threat to democracy, the amazing number is that more people declare Democrats to be a threat – 28% to 33%.

– “That 28 percent figure is actually smaller than the percentage who view the Democratic Party as a threat to democracy (33 percent) — despite there being no comparable example of Democrats trying to overturn an election. (And no, Stacey Abrams and Hillary Clinton aren’t analogous.)”