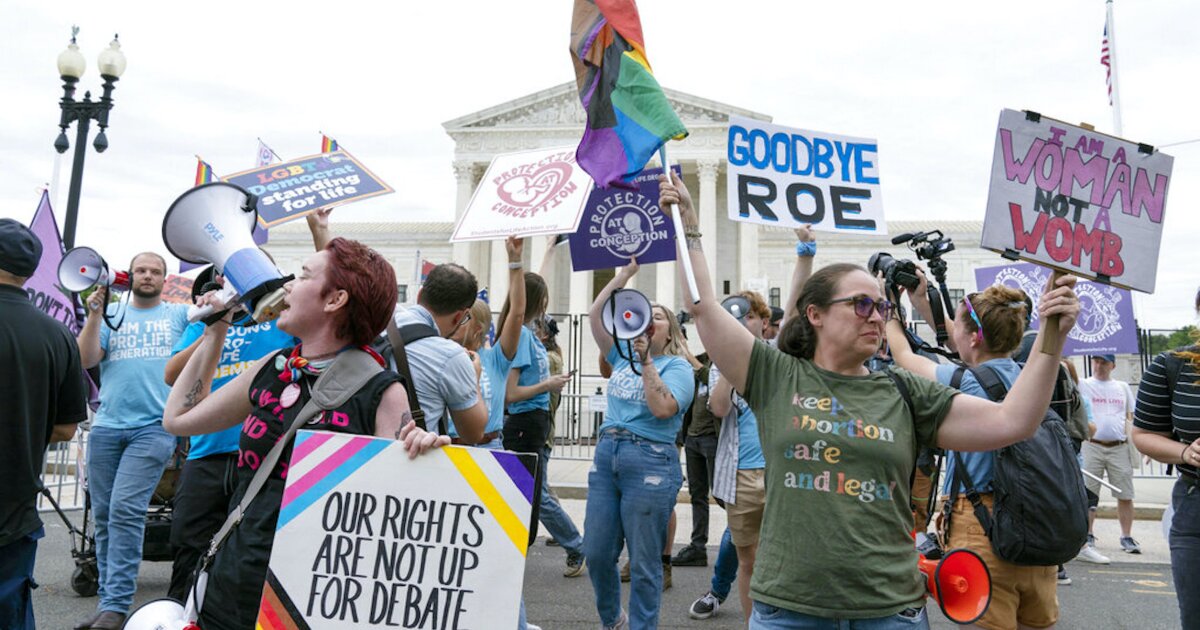 The opposition to abortion that unified Republicans for a generation is poised to disintegrate, with internecine battles arising over how far the party should go with laws affecting when a woman could terminate her pregnancy.

Some red states have settled on bans at 15 weeks with exceptions for rape and incest; others at conception with carve-outs only to preserve the mother’s life, sparking anxiety among veteran Republican strategists that the Supreme Court decision overturning Roe v. Wade, long sought-after by the GOP, could mark a new era of treacherous infighting.

And with Republican lawmakers in some legislatures mulling onerous regulations to prevent women from crossing state lines to obtain an abortion where the procedure remains legal, those worries are extending to a new battlefront: 2024. Party professionals concede Democrats could wield Dobbs v. Jackson Women’s Health Organization as a bludgeon against their next presidential nominee.

“A presidential contest is an entirely different kettle of fish than a midterm election, where the out-of-power party can simply offer themselves as an alternative to the status quo and let political gravity do the rest,” said Colin Reed, a Republican strategist. He argued in a column for Fox News published this week that abortion will not save the Democrats from a GOP wave in 2022.

“On this issue in particular, it’s going to require Republican candidates to avoid sounding like fire-breathing ideologues in the primary to have a chance of competing in purple and suburban parts of America that hold the keys to success in the general,” Reed added.

A Republican pollster conducting focus groups in battleground states and polling on the abortion issue said the party can win a debate with Democrats if the issue is “reasonable restrictions” versus “abortion on demand.” Even regarding legislation outlawing abortion once a fetal heartbeat is detected, Republicans can at least fight to “a draw” in contested territory.

But without exceptions for rape and incest, specifically, as is the case in multiple red states so far, roughly 30% of voters who otherwise consider themselves “pro-life” drop off and side with the Democrats on abortion, this pollster’s data show. These voters believe it’s “cruel” not to allow for those exceptions to abortion bans. “The thing that can kill us in 2024 is a purity fight in red states,” this Republican insider said.

For decades, Republicans were almost unanimously “pro-life,” agreeing that the landmark 1973 decision in Roe v. Wade creating federal protections for abortion rights should be overturned. Republicans largely advocated states be empowered to decide the question of abortion, individually, through legislation as supported by their voters. As that process finally plays out, just months before the midterm elections, Republican strategists are confident the abortion issue will have a minimal impact on their party’s soaring prospects.

President Joe Biden is too weak politically and Democrats are too hobbled by skyrocketing inflation and other challenges to overcome the building red electoral wave (although not for lack of trying,) say Republican insiders intensely focused on this November. But their rosy projections end there.

In battlegrounds like Arizona and Georgia, where Biden defeated President Donald Trump in 2020, GOP consultants are warning that strict abortion bans in staunchly conservative states like Oklahoma threaten to push suburban swing voters, especially the women, into the Democratic Party’s camp in 2024. The abortion issue has always been more salient in presidential contests, and by the time the next campaign gets underway, Republican actions to curb abortion will be tangible versus hypothetical.

“It’s going to create major infighting in the party that ultimately leads to failed legislation that undermines support at the ballot box,” a Republican operative in Georgia predicted. “Key groups — women, soft Republicans, swing voters — will reconsider voting for a Republican ticket.”

Meanwhile, in states permitting direct voter participation in lawmaking through referendums, Republican strategists fret abortion rights advocates could use the system to supercharge Democratic turnout by placing initiatives on the ballot to sidestep GOP legislatures and governors. “Initiative and referendum states will get clobbered with massive paid campaigns that will no doubt help Democratic turnout in 2024,” cautioned a Republican operative in Arizona.

With the Supreme Court’s 5–4 decision overturning Roe v. Wade in hand, many Republicans are not content to focus on outlawing abortion in states where voters support anti-abortion policies and have given the party lawmaking majorities.

Some are pushing Congress to enact a national ban if the GOP wins control of the House and Senate on Nov. 8. Some are looking for legal avenues to prevent, or at least deter, women who live in red states from traveling to blue states to access the procedure where it is still allowed. This particularly controversial proposal has been discussed in Missouri and Texas, as abortion opponents there grapple with the limits of state law.

Such moves are being discouraged by conservatives who staunchly oppose abortion rights and have dedicated their political careers to realizing the Dobbs v. Jackson Women’s Health Organization decision issued by the high court on June 24. Why? They are wary of a political backlash that would cost them the moral high ground, preferring the strategy of patient persuasion to chip away at support for legal abortion at any stage of pregnancy that exists in Democratic states.

“In the USA, you can cross state lines,” David O’Steen, executive director of National Right to Life, said flatly. “I’m not aware of any serious discussions around anything like that. We’re going to work within the state to pass the strongest laws we can.” O’Steen is in good company. Supreme Court Justice Brett Kavanaugh wrote in his concurrence to Dobbs that any abortion-related law regulating interstate travel would be blatantly unconstitutional.

A Republican insider in Missouri expects the proposal being bandied about in the Show Me State to be discarded for the simple reason that it is a “messaging loser” and “bad optics.”

As for a federal abortion ban, already in development by some congressional Republicans who anticipate being in the majority next year, Faith and Freedom Coalition Executive Director Timothy Head said he prefers the state-by-state approach long advocated by conservatives who criticized Roe as constitutionally indefensible aside from moral qualms raised by legalized abortion. “I really prefer to leave it to the states,” he said. “That’s the most prudent way to proceed.”

Head also warned of the political perils of invoking the “nuclear option” — breaking Senate rules to eliminate the 60-vote threshold for legislation — that would surely be required to muscle a bill banning abortion nationally through Congress and to the president’s desk. “As soon as one party eliminates cloture votes in the Senate, the pendulum is going to swing constantly as it relates to this, so I think it’s best to leave this at the state level.”